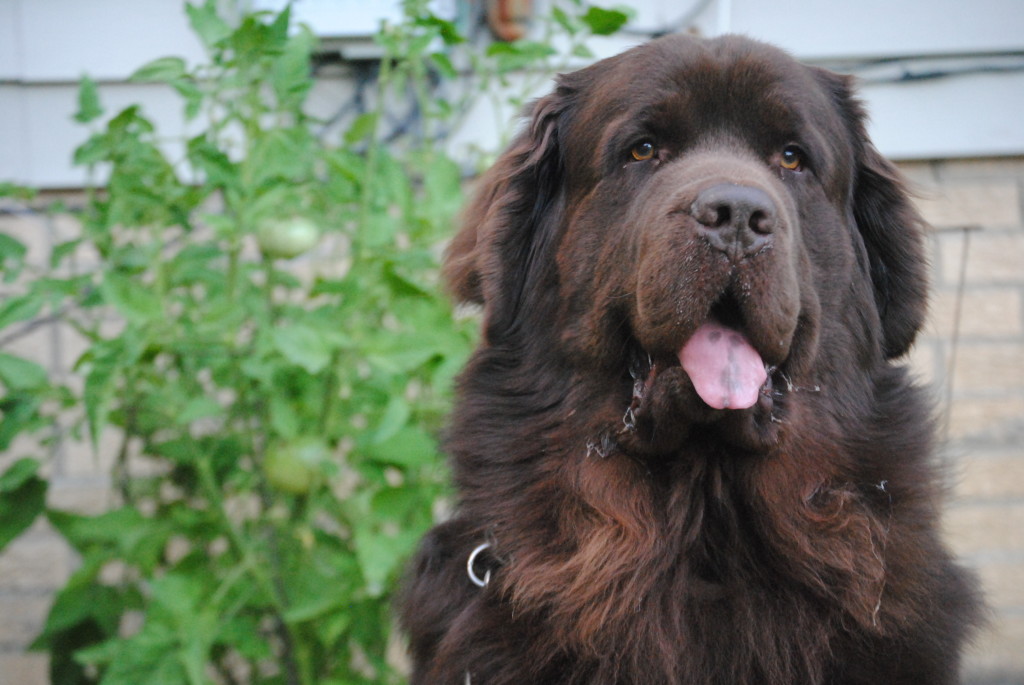 It’s been just about 2 months since I planted the garden.

I have to tell you I was moderately concerned about the well being of my garden up until a few days ago. The first month was tough. We got off to a very slow start and I thought my garden was doomed. Nothing was growing any taller. It was staying the same exact size.

So I went and bought some colorful tomato cages to give my tomatoes some confidence.

So I showed my garden some love and spent hours taking care of it any finally I began to see some signs of life, but then the bugs came and started to eat my pepper plants and I almost had a meltdown but I pushed though it and handled it. Then the rain came and I thought my garden was going to float away.

Then the deer came and ate the top off of 2 of my tomato plants. Lucky for me I planted 7 tomato plants. The front 2 were just teasers for the deer. Ha!

Then the heat came and I feared the wilt would take over.

So here’s the status report:

Basil-growing awesome, yet I have no idea what I am going to do with it.

Carrots-growing, yet I have no idea when I will know that they are ready or how to pluck them from the ground. Dig or pull? 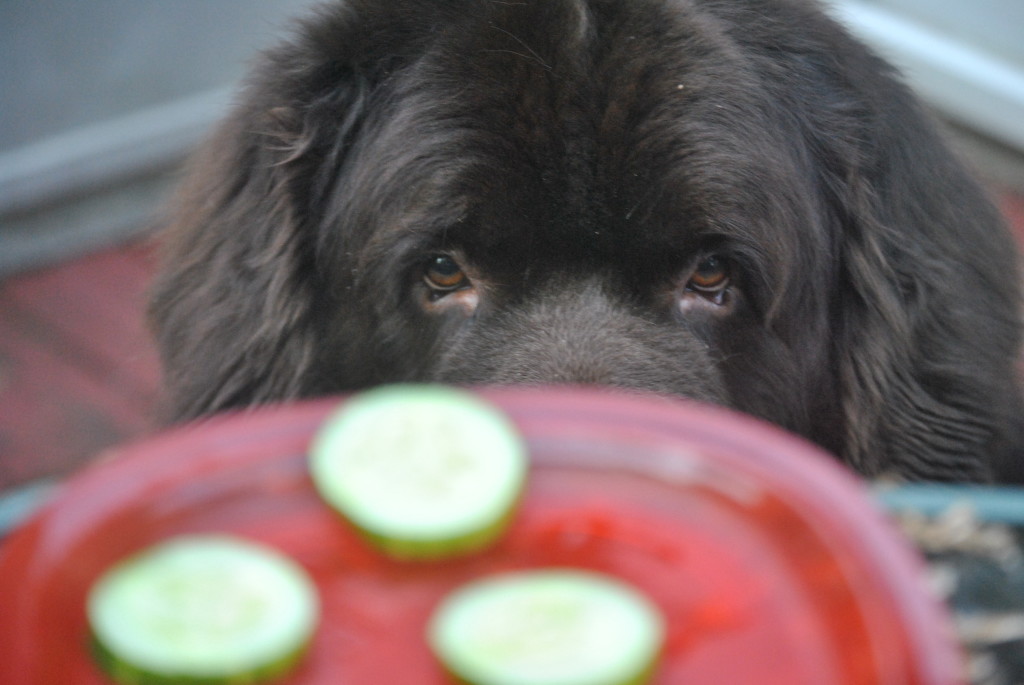 Cucumbers- The cucumbers are growing off the vine! (ha! see what I did there:) We’ve already eaten 3 this week and they are delicious, but they need to learn proper garden etiquette and refrain from attaching to other vegetables.  On a side note, Sherman just became a recent fan of cucumbers. Leroy is still undecided.

Zucchini-picked my first one yesterday! Don’t know what I’m going to do with it since I don’t eat zucchini but yay! and I had no idea the plant would get that big!

Thyme-growing nicely, but again, I have no idea what to do with it.

Peppers-green ones are growing nicely. The future of the red and yellow are still to be determined.

Watermelon and cantaloupe-Ummmmm……..I had no idea the plants grew so big and liked to spread. They have almost become one and the cantaloupe may take over the whole garden sometime soon. I’m just going to have to let them do their thing and see what happens. I noted in my head that next year maybe they need their own separate garden.

What’s not growing? Kale, lettuce and leeks. I’m ok with that since they were planted around the cantaloupe and there is absolutely no room for them. Maybe the cantaloupe plant ate them.

So what I have now, is a garden that is completely and totally overcrowded, but I’m happy with that.

Alright, give me your tips, cucumber recipes, zucchini recipes, talk to me!

I LOVE stuffed zucchini. Make a mix of your favorite ground meat, add some tomato sauce and then split the zucchini in half length wise, scoop out the seeds and replace with meat sauce. Cover loosely with aluminum foil and bake at 350 until the zucchini is soft. Remove foil and top with your favorite shredded cheese and bake about 5 minutes more. Then you pop one half on each plate and scoop it out!

Sounds yummy. Zucchini, I slice and saute lightly with a little olive oils and spices, or you can cut lengthwise, brush with oil and spices and grill. Yummy! Cucumbers must be sour cream and cucumbers like my grandmother used to make. LOL I must be hungry.

Great job! Good for you for not giving up. Every year Mother Nature provides new challenges, or should I say "opportunities" to learn from in the garden.

Sounds like you're in about the same boat we are: tomatoes - need cool nights to turn and we just haven't had that yet; kale and lettuce - it's way too hot for them at this point, try again in the fall, they're cool weather plants; died laughing at your cucumbers because mine are doing the same thing, I yell at them everyday for glomming on to the tomatoes, sheesh.

I'm having trouble with my squash (but can give you oodles of recipes for them if you want). Getting lots of flowers but the bees don't seem to be pollinating them. Hrumph.

I hope you've enjoyed your efforts. I used to grow from seed but barely have time to eat. Still I would never miss having at least a few veggies growing in the yard. There is something very rewarding about it.

Exactly. Live and learn. I now know that cantaloupe and watermelon need A LOT of room to grow! and that cantaloupe like to spread and climb-didn't know that! My Mom told me that kale and lettuce was more of a good weather veggie but I had all ready planted the seeds so I thought I would see what happened. Obviously nothing. This was my first time planting some seeds and I was surprised to see the watermelon and carrots grow!

My neighbor lady would LOVE you! Her yard and mine are back to back and she's forever complaining to me about not taking better care of my yard. She has a huge garden and is always out there working on it. I try to avoid her if I can because of a recent incident that happened. I'm sure she'd have lots of ideas for you! But me, I got nothin'!

Congrats on the veggies, and enjoy!

My neighbor is always peeking at ours, she's funny! Last year we took her some cucumbers because she hinted she would like to try some! She always tells me about the days when she was younger and had a garden. :)

OMD! Ma soooo loves the tomatoes and zucchini! She cooks them together and makes an awesome side dish/soup!! Wows, you're gonna have lots to do!!! Kisses, Ruby ♥

This zucchini soup that some people have mentioned seems to be growing on me!