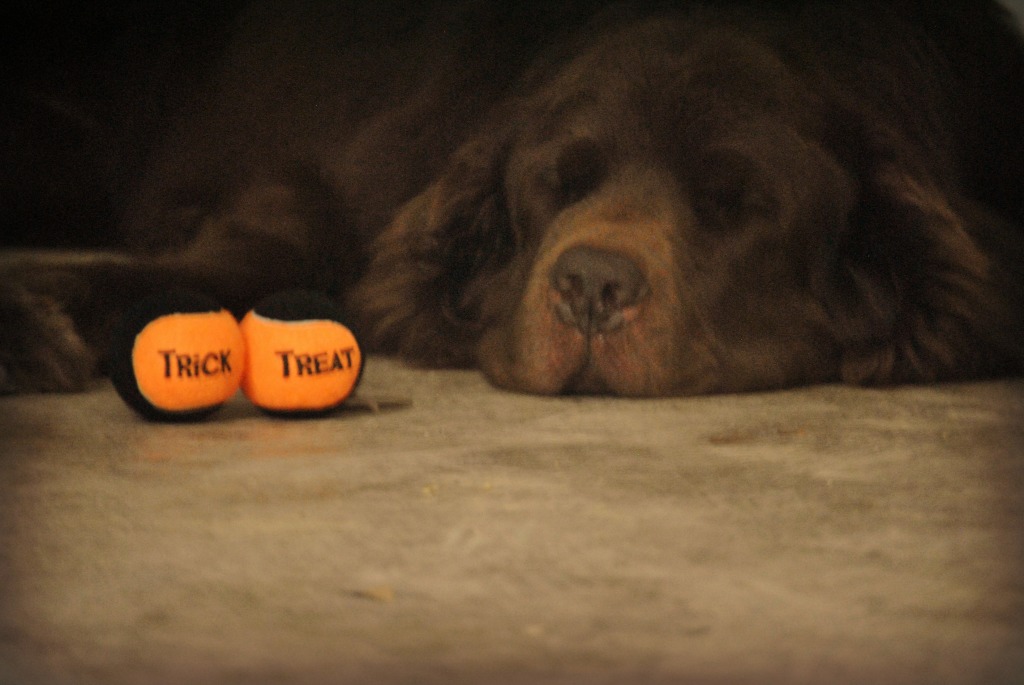 Little by little it seems as though Leroy is getting back to himself.

While he looks different on the outside his mind is definitely getting back to normal which is a bad thing and a good thing.

It’s a good thing because of course it shows that he’s feeling better but it’s a bad thing because it means he is getting back into mischief. Mischief that I would rather not have him getting into because it’s mischief that’s not good for him or for me.

Here’s what I’m talking about:

We had our annual clambake 2 weeks ago and Bobby’s 13th birthday party last week. I was nervous about both parties, but more so the clambake because of Leroy and his current health status and after quite a few days of going back and forth, my husband and I decided to go ahead and keep our plans.

I was super nervous that Leroy would get into some of the food that was around and that all the happenings would just overwhelm him which is why, much to his displeasure, he was kept in his cage for most of the clambake.

We let him join the party after most of the guests left and the food was put away. Rules were explained to the remaining guests to keep all food out of reach and no matter how pathetic Leroy looked at them, not to feed him anything or he would die.

Everything went well and Leroy didn’t get one bite of anything except for his late night meal…that is until we were headed off to bed for the night and I heard someone in the front room crunching on something.

Eating some little Halloween goodie bags that were filled with popcorn, pretzel and candy corn M&M’s that were left behind by some of our little guests.

I’m sure that’s good for a dog that has IBD.

Luckily the contents of the goodie bags were low in fat and didn’t seem to upset Leroy’s stomach.

The M & M’s must of given Leroy a bit of a sugar rush because the following day Leroy decided that he was feeling up to jumping the fence that blocks off the underneath of our deck.

It’s a temporary set up since the pool came down this summer and we’re trying to figure out how to proceed and we like to keep it blocked off because it gets really muddy under there when it rains.

It’s definitely not Newf proof. Sherman learned that he can just lean his massiveness up against and it will fold and Leroy normally takes the one hop approach.

Leroy hasn’t attempted to jump it in several months but the other day I suppose he was feeling up to it and in one hop he was on the other side.

I watched from the window and I was pretty impressed with his grace but something kept telling me that his re-entry wasn’t going to be as flawless.

And………………… I was right because he did a total face plant into a mud puddle when he tried to jump back over.

Then he wiggled around on his back like he was a flipped over turtle.

Then I had a heart attack.

A little muddy but fine.

I explained to him that his body might not be as strong as his mind and I think he understood because the next day he moved onto the picket fence that blocks off the area of our yard where he dug up the foundation of the house.

This fence is secure but one section of it is missing a plank. 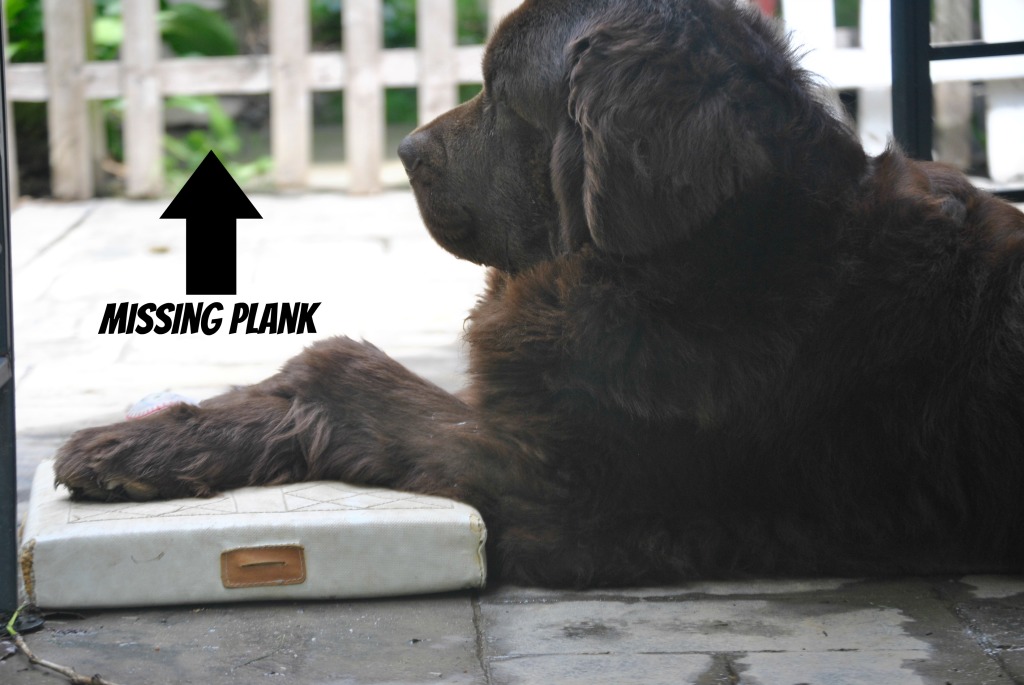 The missing plank was nothing that we were ever concerned about because no Newf should be able to fit through the tiny opening.

Unless you’re a Newf who recently lost 50 pounds.

Then, apparently, you can squeeze through.

Luckily, Leroy was just as surprised as I was that he squeezed through and he stood in the area in amazement until I quickly ushered him out and gave him a bit of a scolding.

NO!NO!NO!NO!NOOOOOOO! We do not squeeze through fences here mister!

Especially THIS fence. The fence that protects the rocks around the foundation of our house that you tried to destroy which may have led us to this whole debacle that you’re in right now.

He gives me ulcers.

**First pic in this post is current. The other 2 are from several months ago.

I'm smiling as I type because I am just so happy to read stories about him once again - whatever the mischief....

Sorry for you Jen because I know you are still on tender hooks with this health. Try not to stress too much but defo keep your eye on him. Seems he is learning some new tricks.

Ulcers...no doubt. But just look at how adorable that face is! I'm sure he's worth every.single.worry.

So glad he seems to be feeling better. I expect there'll be plenty of dog-proofing posts soon. :)

So lovely to see him getting back to his normal self - such a gorgeous boy :-) And I agree sometimes you have to really over-emphasize to some people, otherwise you can run amok of the "just one little biscuit won't hurt him... "