I remember seeing articles pop up a few months ago that this was going to be a bad year for ticks.

Warmer winter, the use of fewer pesticides, the increase in white-tailed deer, the migratory pattern of birds, etc, etc.

They’ve been saying that for the past 5 years.

Fast forward a few months and now I believe it.

This month at work I’ve already seen more ticks on dogs than I did all combined of last year and now I keep telling my husband, “It’s gonna be a bad year for ticks. We have to keep the grass short.”

Just yesterday at work we had a lady bring a small tick in to the clinic in a Ziploc bag. “This was on my dog. Is this a tick?”

It certainly was. It wasn’t a big tick, just a little guy but the fact that it was on this ladies little Shih Tzu that goes to the bathroom in the house on a wee-wee pad and has certainly never seen a heavily wooded area before, is a bit concerning.

Then there was the Lab that we pulled a tick off of and on day that I wasn’t at work I heard they pulled several ticks off of another dog.

And…………… the week before that we pulled this slightly engorged guy off the vet’s dog, which we found by accident when petting him. 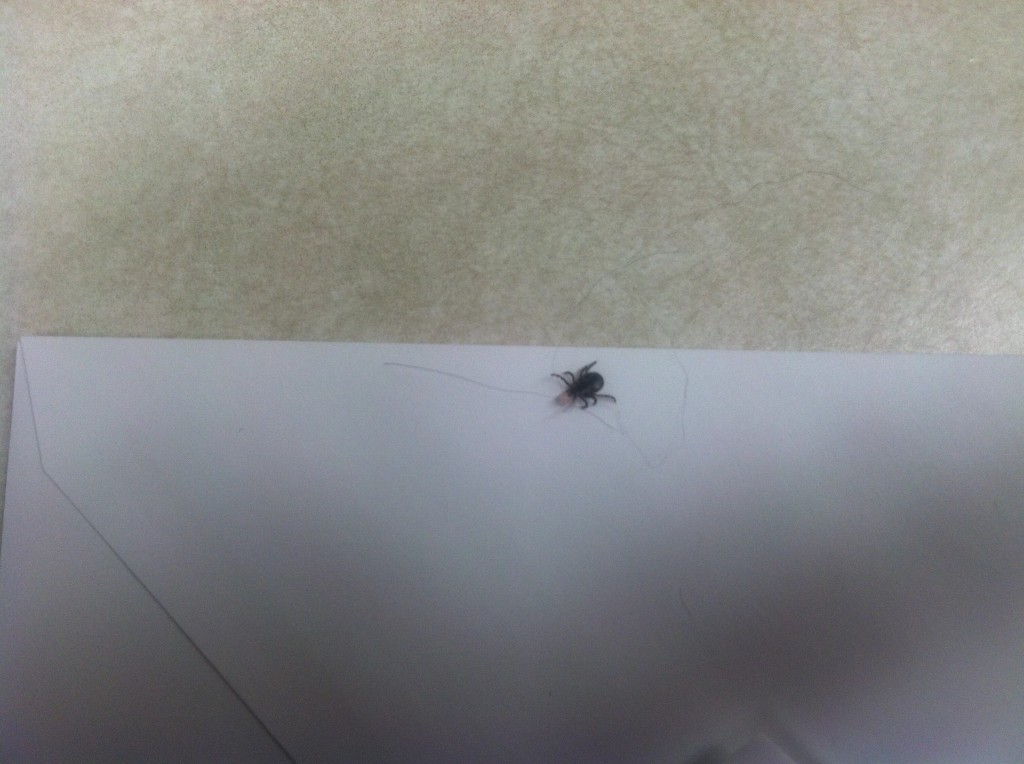 Yep. Now I have proof. It’s gonna be a bad year for ticks.

At least that’s the way it looks for us here in Northeastern Ohio and according to  this article from Ohio State, Lyme Disease cases are on the rise in Ohio and people need to be aware of the risks that ticks present to them and their pets.

According to the Ohio Department of Natural Resources the ticks most commonly seen here in Ohio are the American dog tick which is what the tick is in the above picture, blacklegged deer tick, and the lone star tick.

Recently, Ohio is reporting more of the black-legged ticks which can cause Lyme disease and anaplasmosis.

I think what’s the most concerning to me is that so far the dogs that I have seen that have had ticks on them are dogs that are NOT hiking through heavily wooded areas. They’re not out camping. They’re out walking around their suburban neighborhoods.

Ticks freak me out. Don’t get me wrong if they are not on my dog or on a person, but safely contained in a container I can stare at them for hours, but in all reality their gross little legs and their blood sucking tendencies are disgusting and they often carry diseases such as Lyme disease, ehrlichiosis, anaplasmosis, Rocky Mountain spotted fever and more. Symptoms of tick-borne diseases can be vague and difficult to recognize. Often many pet owners don’t know their dog is suffering from a tick disease until severe symptoms are present.

Humans and other non-canine family members can also become infected with the same tick-borne diseases as dogs.  So, if you live in an area where ticks have been seen or if you have ever found a tick on your dog, you should also be sure to check yourself and your family.

Finding a tick on myself or on the kids is one thing, but finding a tick on Sherman or Leroy would be like finding a needle in a haystack which is why I have them on topical flea and tick prevention. I’m not going to go into what products I think are best and which I don’t because there are so many products out there and to each its own.

One thing I did want to point out is that whatever product you are using, make sure you are reading the package inserts. Know your product. Know the ingredients. Know what it does and what it doesn’t. So may rumors float around about flea and tick products but it all comes down to really knowing how the product works.

Be Prepared. Be Educated. Be Safe.

Other links you might find helpful when dealing with ticks:

How to check for and remove a tick.

Diseases in your area.  Shows you a map of the reported positive cases of ehrlichiosis, Lyme disease, anaplasmosis and heartworm disease in dogs.

0 shares
That Awesome Feeling Of Being Missed By Your Dogs
← Previous
Let's Not Forget About The Buddy Poppy This Memorial Day Weekend
Next →
Click here to cancel reply.

We have deadly paralysis ticks here in Australia, I have been using a flea and tick disc on my dog for over 12 months with great results, so good in fact, I have become a distributor for them http://nofleasonme.com

I'm a little freaked by the upcoming flea season and found a great article that shares how to detoxify our dog's liver while using spot treatments. I'm returning to one I used in the past that I know they didn't have a reaction to. Sucks! But I don't want them (or us) suffering through the summer.

The Tick King Dog | About Pets

[...] blogger friends at My Brown Newfies had just posted a great article about ticks this year.  The tick forecast is:  gonna be a bad one.  We’d already noticed way more [...]

We recently had our Newf shaved as he was bitten by a paralysis tick and became paralysed. The vet had no choice but to clip him very short in search of the paralysis tick. Has anyone shaved their Newf? There are a number of opinions online about NEVER clipping and clipping in warmer climates. We are very anxious to know how his lovely coat will grow back, although we are just so grateful he is alive!

Oh no! So sorry to hear he got so sick! Thank goodness he is doing better! From what I have heard, most people only shave their Newfs for medical reasons, otherwise they give them a "summer cut" . I've never shaved any Newf that I have had, but cut them short in the summer, but some Newfs need to be shaved because of heavy matting. If I needed to shave them to find a tick that was causing them paralysis, I would! Hugs to your boy! So glad he is recovering!

Ticks are so disgusting, thankfully my dogs are short-haired and I'm paranoid so I usually catch them pretty quick. I find if I hit the dogs hard with the spray before walking and rinse their legs off and then brush them I have a fairly good rate of catching the little buggers quick. I also have my yard sprayed which helps.

Typically I get more ticks than the dogs. :-(