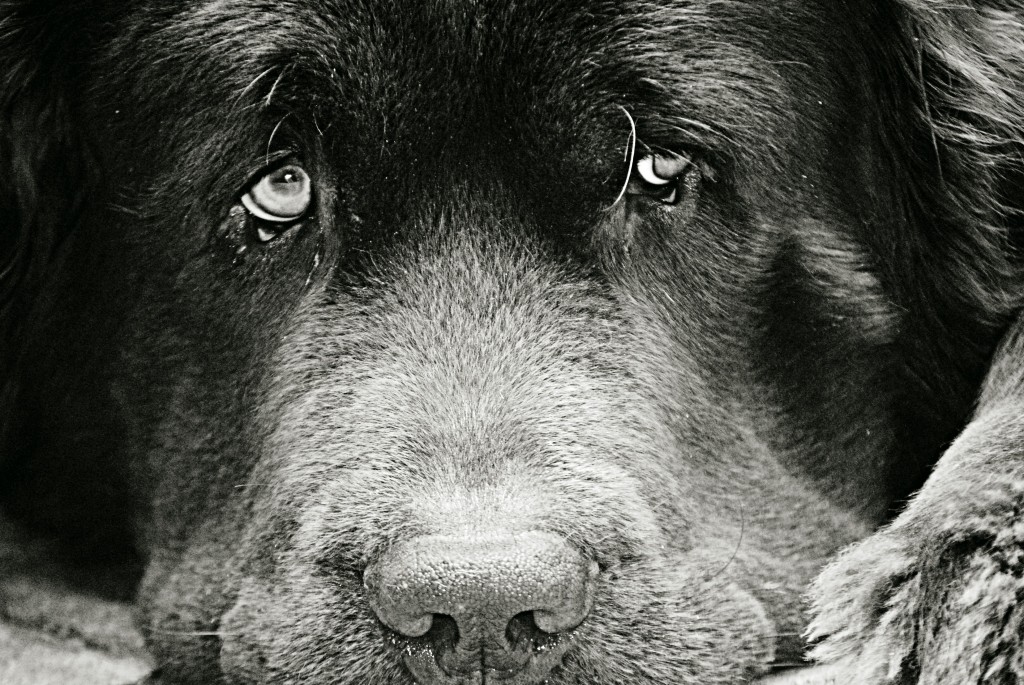 That is a very good question and it’s a question that I wish I didn’t have to try and answer, but I will give it my best try no matter how much it pains me.

Leroy has been eating rocks for several years now. The first time I wrote about it on the blog was back in March of 2011.

This wasn’t the first time he had eaten rocks but it was the first time I realized that we had a big problem on our hands. At that point, Leroy was not only eating rocks in our yard but he was also eating rocks on the sidewalk when we went for walks.

We did our best to rectify the situation and remove any rocks that were visible in our yard.

We thought we had broken him of this nasty habit until the following year when we noticed that he was eating rocks again. The rocks weren’t rocks that we had put in our yard, they were just apart of the ground, so we did our best to try and get rid of those and block off areas that he liked to go to dig in.

We poured a new concrete patio, poured a concrete sidewalk where rocks use to be, and put down more sod. I even went to the extreme of having him wear a basket muzzle at times when he was out in the back.

We have no visible rocks in our yard, but Leroy is stubborn and determined and he digs for them.

So over the years, we have dealt with it and when we notice that he is digging for rocks we cover or block that area off so he can’t get to it, which he then just goes and finds another area to dig in.

It’s a vicious cycle and sometimes he poops out rocks or vomits a few up, which leads us back to the yard to see where he has been.

Winter seems to be the worst time for his rock eating which is mind-boggling because the ground is normally covered in snow and frozen.

So a few weeks ago Leroy puked up a pile of rocks and I went outside and looked for where he could have gotten them.

I found the area and immediately blocked it off. I wasn’t overly concerned about him vomiting because he only puked up a few rocks and he was keeping his food down, so to me, that meant the rocks weren’t blocking anything and they would come out naturally.

Then over the weekend, I noticed he was spending a lot of time along the foundation of our house and when I went out to investigate. I saw that he was digging there so I covered it.

This was a red flag for me with Leroy.

Dogs vomit undigested food all the time for a variety of reasons.

Leroy vomits undigested food when he has rocks stuck in his stomach or intestines.

So my radar went on full alert.

If he pukes again he earns a trip to the vet.

Tuesday morning comes and I wake up to the sound of Leroy dry-heaving.

Then I hear the sound of liquid hitting the floor. He’s puking up water which is a very bad sign since he puked up food last night. That means nothing is moving through his stomach.

The next 5 vomits I heard rocks hitting the floor and when he was finished I carefully got out of bed and walked over to turn the lights on.

I almost died right there when I saw the sight before me.

My bedroom floor was covered in rocks.

Not good. Not good at all.

I counted the rocks and there was 33. That’s a lot of rocks.

Maybe he got them all out, but something was telling me that probably wasn’t the case.

So I waited for the vet to open up and gave them a call.

They told me to bring him up asap.

The vet took Leroy back for x-rays first and I waited in the waiting room.

I could hear beyond the waiting room doors so I listened closely as I heard the x-ray machine take the pictures.

Then I waited to hear the response.

Yes, I was eavesdropping.

“Wow. That’s a lot of rocks.”  is not what I wanted to hear but exactly what came out of the vet’s mouth. Then I heard another person ask, “Are those all rocks?” and then I hung my head in shame.

So the vet comes out and takes me in the back to see the pictures.

As soon as I saw the mound of rocks in his stomach I knew they were going to have to open him up.

The vet felt that if he didn’t vomit these rocks up when the others came out that he probably wasn’t going to and the fact that there were so many rocks all together in a pile meant that there was just too much weight in his stomach for him to get them out on his own.  The

longer they were in there, the more we risked damage to his stomach.

So I approved the surgery and left the clinic in tears.

The vet called me after the surgery and told me they took another 28 rocks out of his stomach, bringing the total up to 62, plus the 2 rocks that were already moving through his colon. The surgery went well and there was no damage to Leroy’s stomach.

Leroy’s still recovering at the vet and should be coming home today or tomorrow, as long as he keeps food down and poops. I’ve gone in to visit with him and he is sore and sad but is in very good hands. I miss him terribly and want him home.

So why does Leroy eat rocks?

That is a very good question and I would love to know the answer.

Experts suggest that dogs eat rocks for a few reasons:

Pica. This is a disorder where dogs eat inedible objects.

When Leroy was younger he ate a lot of things that were inedible such as batteries, cell phones, blankets, and coins, but he outgrew that and focuses all his attention on eating rocks, so I’m not quite sure if this fits Leroy, but it might.

Stress. Leroy is one of the least stressed dogs that I know so I don’t think this is the cause.

Boredom. This very well could be a cause. Even though we do a lot of things, he could be totally bored.

To get attention. He doesn’t do this when I am outside with him so I don’t think so and he gets plenty of attention and is not the jealous type.

Mental. Another possibility. Is there something wrong upstairs in Leroy’s head? Do you really want me to answer that? because my answer is yes, but what is wrong I have no idea. Leroy’s a smart dog but could there be a loose wire?

Lack of something in their diet. Maybe, but Leroy is fed very well and is a strong, healthy dog. I’ve had bloodwork done on him numerous times and all was good, but I never actually did any specific testing.

So I can’t give you a straight answer of why Leroy does this but when I really think about him I lean towards it being some sort of a behavioral issue.

So where do we go from here?

Leroy has a long road of recovery ahead and we have some winter yard work to do.

My husband will be building a new wall and putting up a fence in the area where Leroy was digging next to our foundation.

This area is under our deck but also off of our patio and I suppose, will now become a fenced sunflower garden for me. For now, it seems like Leroy will have to be supervised when outside which sucks for him because he likes to spend a lot of time outside lounging around, especially in the winter.

62 is a low estimate. We know for sure 62 rocks but there is also 2 in his colon and I found 3 piles of rock vomit out in the backyard that contained at least 10 more rocks.

The rocks that he ate this time were limestone and varied in size and shape and I don’t think he ate them all at once…maybe over a day or two. I’m not at all proud of the fact that my dog ate 62 rocks.

I actually feel like I failed him, but I want to share his story because I know there are so many dogs out there that eat rocks and it’s a very dangerous and expensive habit.

Oh! I forgot to mention that, for a dog that eats rocks, Leroy’s teeth are in great shape, the vet could not find any teeth that were broken.

Hi, My dog has started chewing on (and possibly swallowing) rocks and I'm wondering if you ever found a solution to stop your dog from wanting to eat rocks?

We had to remove most of the rocks from our yard and block off areas of the yard where we weren't able to remove all of them.

OH gosh! Im glad he is on the mend. I can't imagine how difficult it must be to keep him from digging up rocks! I have had many panic phone calls and visits to my vet because my one cat eats random things. LIke an entire sleeve of saltine crackers, suet for the bird feeders, miracle grow planting mix etc. The vet thought he might have pica, which is either emotionally or lack of healthy diet triggered. He was a stray that we had brought in, and had been climbing around a dumpster the first time we spotted him. The vet eventually decided that he hadn't broken his scavenger habit even though it was over a year. When we found him he was just a kitten and had a bad wound on his leg. The vet thinks obviously something traumatic happened to him at a young age and he has had to be resourceful. We bought the feliway phermone plug-ins, and make sure we give him a little more attention then the rest of the pets and it has slowed down his scavenging.

wow! That is such a tough problem. I'm adding my wishes to everyone else's. He looks like such a sweetie. The worst dog-injestion-habit story I have is that years ago, one day my two poodles (long since OTRB) got into the kitties' litter box that hadn't been scooped. When I arrived home after work, I walked in and there was a terrible smell. They had eaten an enormous amount of cat poop and then puked it up and also had diarrhea ...everywhere, including beds, couches, chairs, floor, you name it.The stench was ungodly. Luckily they were ok, and I just lay on a tiny part of the floor and laughed hysterically, and then wept.

So glad that Leroy is okay! He's lucky to have you guys. :)