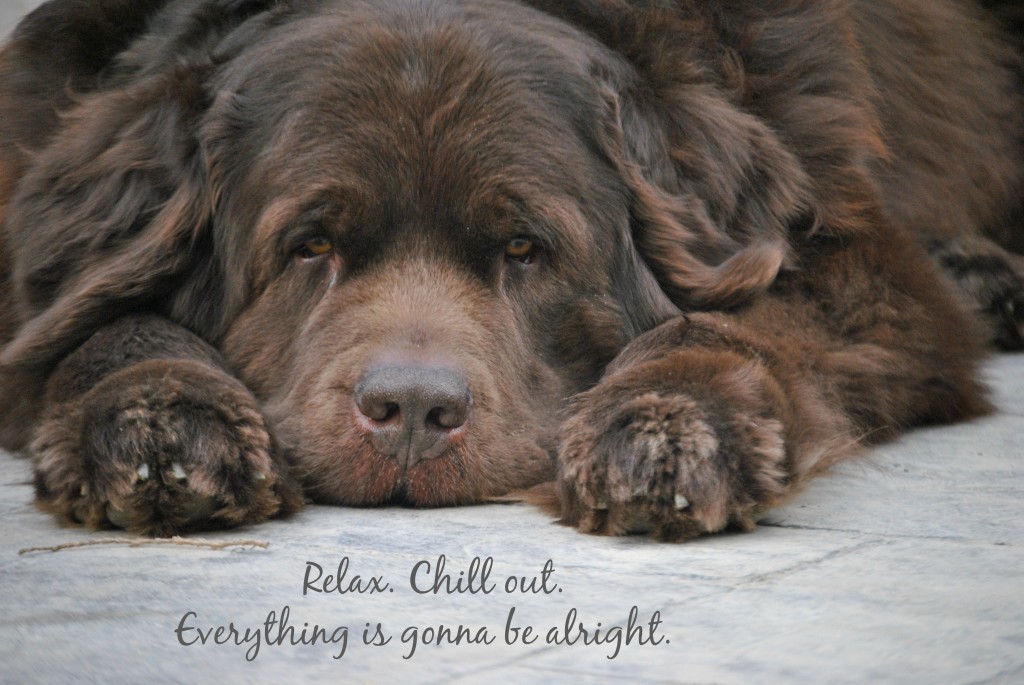 Sometimes I have a hard time paying attention and I give full credit to my over active brain for that.

It’s not that I’m not paying attention.

But in serious situations my mind is going a mile a minute and not all the important information gets absorbed where it needs to get absorbed.

I eventually remember but it’s usually after the fact and way too late to make any difference.

My husband can’t stand this.

It drives him nuts and I don’t blame him because it would drive me insane if he did this.

This one of the reasons why I prefer that he comes with me in situations that I know will require my full attention so that when I get home I don’t have to explain to him what went down, fudge it up and then remember the whole story later.

Unfortunately, despite my pleading, my husband was not able to take off work and come with Leroy and I to the vet, so I knew I had to shape up and get my full attention in gear so I could report back to him and you with solid information.

I think I was pretty successful and just to be safe I’ll get it all out now before I forget.

I was a nervous wreck, as I normally am when something goes wrong with the dogs. Based on previous vet visits and Leroy’s symptoms I set myself up for the worse case scenario, which in some cases, is o.k. 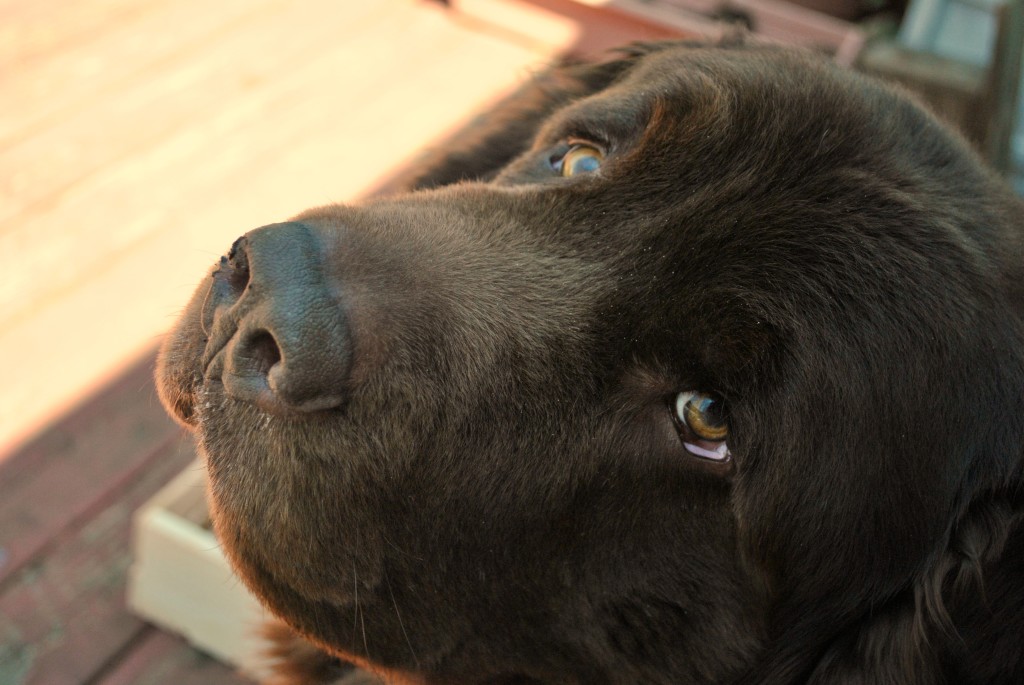 We had a long wait in the waiting room which I think was a good things because it gave me time to settle down and set up a game plan to keep an open mind. My sister was also there for a bit which helped me settle down.

When we finally got into the exam room I was immediately annoyed when the vet came in because it was a totally different vet than we have been seeing for the last 4 months. This was my fault because when I made the appointment I didn’t specify which vet I wanted to see. After working in multi-vet practice for several years I should of known better.

What am I going to do about it now?

My open minded self told me that there was nothing I could about it now so to just go with it.

The vet was fine. She clearly had gone over Leroy’s chart before coming into the room and knew his history. I think she knew some of my history too just by the way she spoke to me, which was a good thing.

I’m never afraid to ask questions to the vet. There’s never to many questions when it comes to my guys.

I want to be as informed as I possibly can.

So after we played 20 questions the vet gave Leroy an exam and then we talked some more.

Leroy checked out good on his exam and the edema is currently only on his left ear and a tiny bit on his right ear. His stomach sounds like it is working as it should, his heart is good and his temperature was normal.

Per his fecal check he has no signs of parasites. 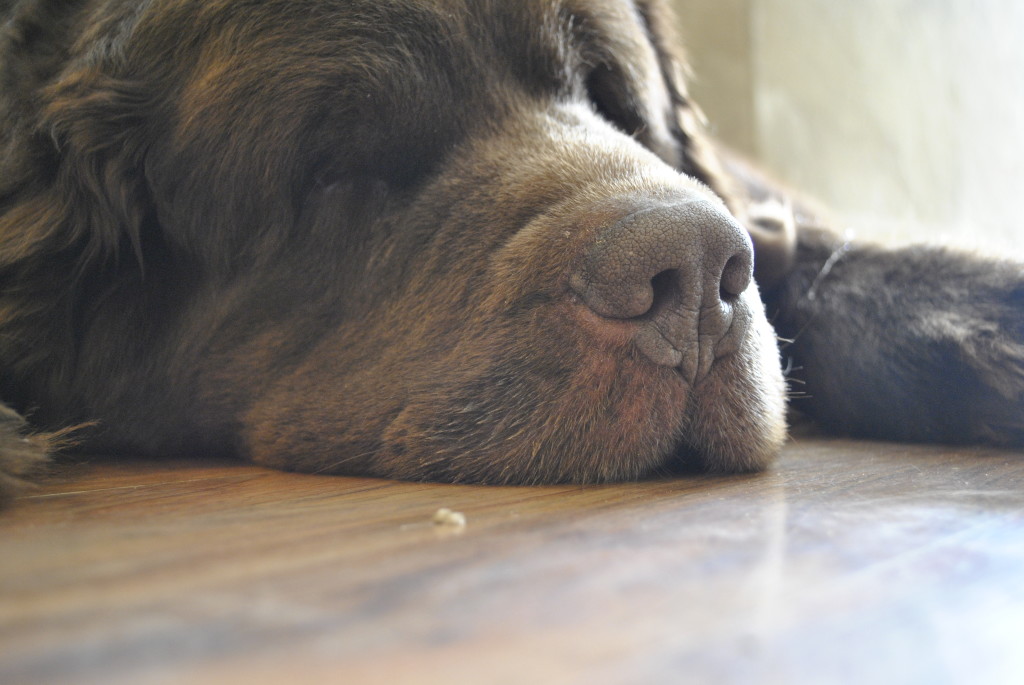 So the vet and I talked a bit more and I was surprised at her treatment plan.

“We need to settle his gut down.” Is what she said.

What? No other tests? That’s it? ….is exactly what started to pop into my head.

“No, no, no! I need answers and I need them now!” is what I shouted in my head, but then I realized the vet was still talking and I needed to focus or I was going to miss something important..

“His gut has been through so much over the last few months. He’s eaten the rocks, he’s had a major intestinal surgery, he had a urinary tract infection, he had a bad reaction to the antibiotics, he was on steroids and he has had the edema.”

” We need to take a step back, stop throwing things at him and settle his gut down. I’m not saying that’s the end all be all to this, but I think that is what we should do now.”

“The edema is better. You got the diarrhea to stop. We are headed in the right direction.”

I needed a few minutes for my mind to process these words.

I wasn’t sure if I liked them and I’m still not 100% sure but I’m going to go with it for now because when it’s put that way, hell yeah it makes sense.

Leroy’s body has been through so much over the past few months that maybe it’s just exhausted.

It’s been fighting off one thing after another with barley a break in between.

So it makes sense that we need to focus on trying to settle it down.

So here’s the game plan:

And that’s it. That’s the game plan.

But I’m a team player, so let’s do this. Let’s knock this out of the ballpark and move on to better things.

p.s. thank you for all the kind words that you left on Monday. I honestly felt everyone’s positive vibes being sent our way.

p.p.s. About 3 hours after I wrote this post, Leroy had blowout diarrhea again. I am trying not to freak out. We’re good, we’re good-says the tiny little voice in my head.

I think it sounds like a fantastic game plan and I hope it works. I'm always skeptical too, so I understand how you feel, but wouldn't it be great if, in this case, less IS more?

I sure hope this works for Leroy. Sounds like the poor guy has been through more than enough! :( Thinking of you and Leroy - good luck!

Have you looked into raw goat's milk? I know, it's adding something new to the mix but it does wonders healing the digestive tract, which sounds exactly like what he needs. It would replace the probiotics you're currently giving, as goat's milk contains all the needed probiotics. Go slow at first - giving the full recommended amount the first time can cause diarrhea issues but if you ease him into it, it'll do wonders for him. I hope his tummy settles down quickly!

We have used raw goat's milk in the past and my sister actually has a whole bunch! we are thinking of using it in the future. Thank you for the info!

Poor Leroy. I sure hope he feels better soon. It must be really tough on you and your family, it's awful seeing your dog ill. You just feel hopeless. Hopefully, the vets advice will prove good and you'll see an improvement in him. Sending lots of hugs your way x

I hear you. I'm a wreck when there is something wrong with my dogs too. It takes all I have to keep it together at least for them.

I don't picture you ever being a wreck, you always have a good head on your shoulder when it comes to your dogs!