I’ve been curious about beef tripe for several months now and to be honest it both grosses me out and intrigues me at the same time.

For those who aren’t familiar with tripe it is the stomach lining of grazing animals, mostly cows but it can be from other animals like sheep.

Today we are specially talking about beef tripe.

Let’s have a quick lesson about where tripe comes from.

Don’t worry it will be quick and painless but a little gross.

Ruminant animals (an animal that has more than one stomach and swallows food and then brings it back up again to continue chewing it) have multi-chambered stomachs, and tripe generally comes from either the rumen, reticulum or omasum chambers.

The animal swallows barely chewed food which is slightly broken down in the rumen and reticulum and promptly sent back to the mouth for more chewing fun.  It then passes through the reticulum and omasum and into the abomasum where it is further broken down by gastric juices, amino acids and digestive enzymes.

Essentially the digestive process of a ruminant is something like a fermentation process with good bacteria acting to aid in the digestion of the hay, grasses and grains.  It’s the abomasum that is used in the tripe you purchase for your dog.

There is different varieties of tripe. White tripe is what humans eat.  Tripe for humans is put through a cleaning process that effectively removes all of the beneficial bacteria and enzymes that make it so good for your dog.  After all of the stomach contents are taken out, it is washed and then bleached.

Green tripe is what is normally given to dogs. Green tripe is not boiled or bleached so it retains some of the stomach contents like grass and good bacteria and enzymes.

Due to the fermentation process and the way that the ruminant digests, the abomasum provides a food that is incredibly rich.  Not only will it provide completely natural digestive enzymes to the dog but also vitamins, fatty acids and amino acids. It’s also great for those teeth!

Green tripe is said to be an easy protein for a dog to digest. Tripe is also said to be beneficial for dogs suffering from sensitive stomachs and diseases such as IBS and IBD.

Many people feed beef tripe to their dogs in its raw form which can be purchased through local butchers and this is suppose to be the most beneficial way for it to be given. For those who don’t have access to a local butcher tripe can also be found in canned formulas or in a dried treat form. 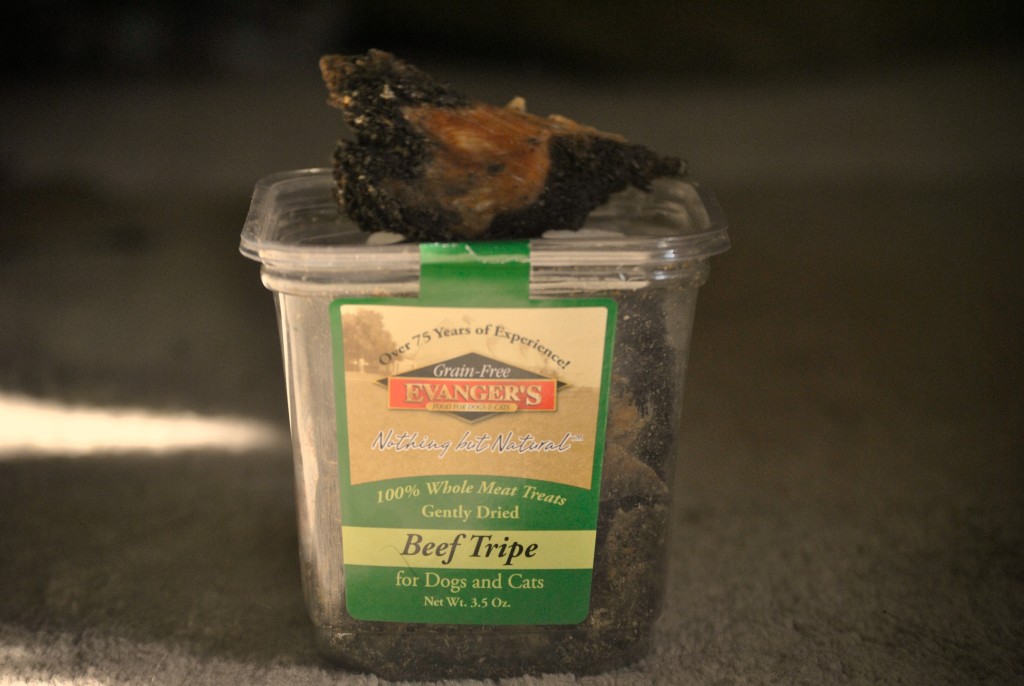 Since we don’t have access to a butcher and raw tripe grosses me out just a bit at this time we’ve been looking to try the treat form.

So when our good friends over at Chewy.com asked if we would like to give some a try from Evanger’s we jumped at the chance.

We’re dealing with the stomach lining of a cow so I expected a strong odor. I’m sure it’s way less of an odor than the raw version but it’s still pretty foul.

Sherman absolutely loved the Evanger’s Beef Tripe as I suspected he would. 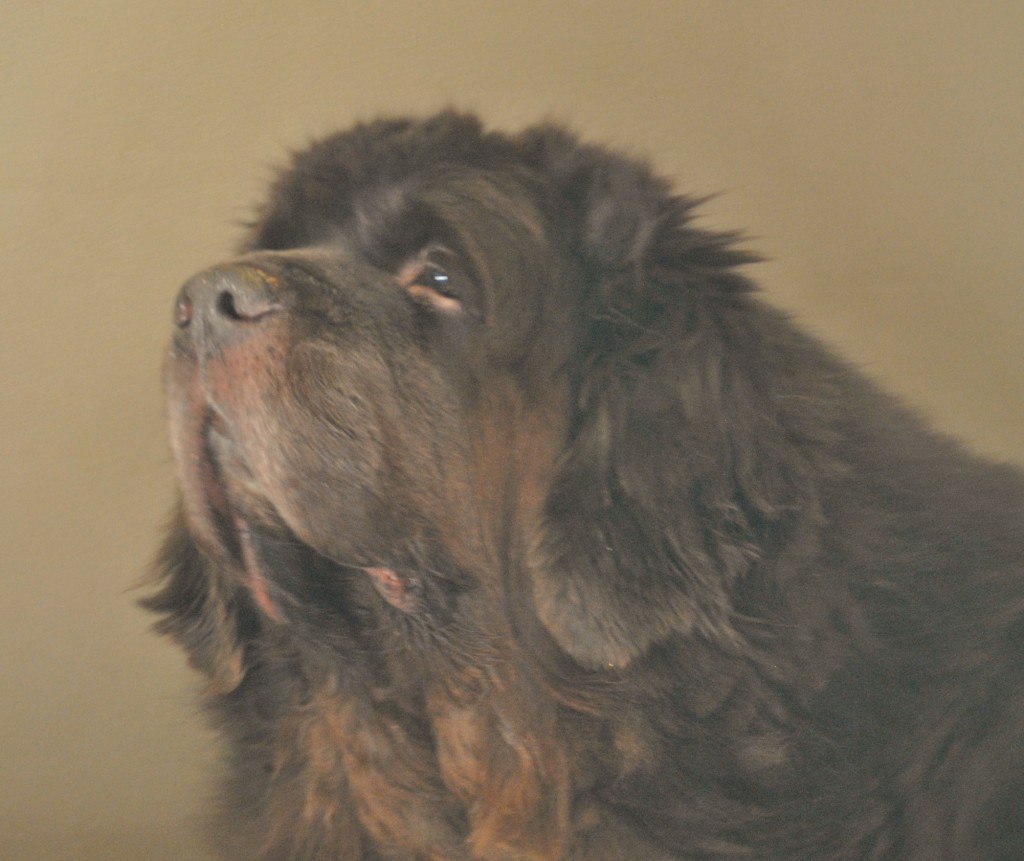 So much so that when I was taking pictures of the product he woke up from sleeping to see what that awesome foul smell was.

When he located it he walked up, 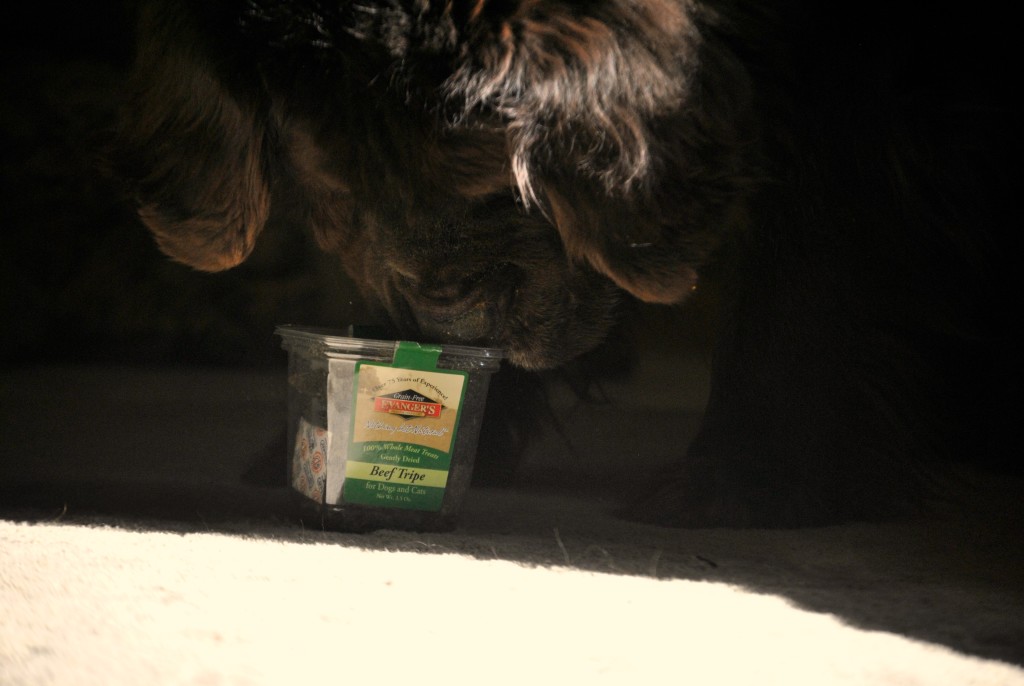 and took the tripe without even asking.

And went back for the package. 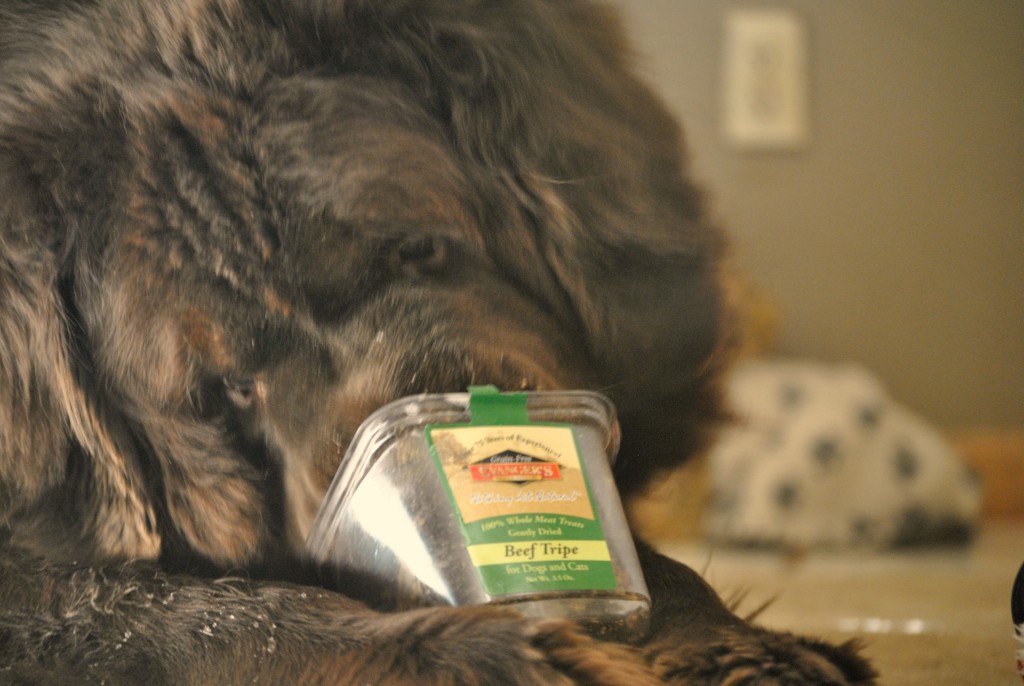 I did NOT give it to Leroy even though it’s said to be good for dogs with IBD. I’m just not there yet. I’m still terrified to add new things to his diet but I will consider it after his next check up if all is still moving in the right direction. It’s pretty high in protein which is where my hesitation is coming from. If anyone has feedback with tripe and IBD dogs it is welcome here!

**Disclosure-We were sent Evanager’s Beef Tripe from Chewy.com as part of their blogger program. I did not receive any compensation for this post. All opinions expressed here are mine and mine only. If interested you can purchase this product from Chewy.com for $6.61 which is a pretty good deal! We’re big fans of Chewy.com here since it’s where we get Leroy’s prescription food from several times a month. They have been instrumental in his recovery with getting his food delivered right to our door on time at a great price! Not to mention-I use autoship so I don’t even have to think twice about it!

Once in a while I get bite sized dried green tripe treats from Only Natural Pet. It's not smelly, which is definitely a bonus!

I'm not too excited about handling tripe in its raw form either - however, I do know it is great in many ways. I've got some buffalo tripe treats, but I've been afraid to open the package - I will hold my breath and give it a try LOL

I don't blame you for not messing with Leroy's diet. We are hesitant to add exotic things to our dogs' diets and they don't have the issues Leroy has had. Looks like more for Sherman. :)

Yes, Sherman has gotten lucky. I have about 6 things that I'm comfortable giving Leroy. 2 of which are his food!

What smells bad to one [ us], smells great to others [dogs]. lol

Isn't that the truth!

Don't you wish you had thumbs, Sherman?! We didn't get this from chewy this month and now we wish we had. The smellier the better if you ask us. Mom would be vomiting in her mouth. BOL!

Lol. Believe me I was and know that Sherman likes it I guess I have more of that to look forward to!