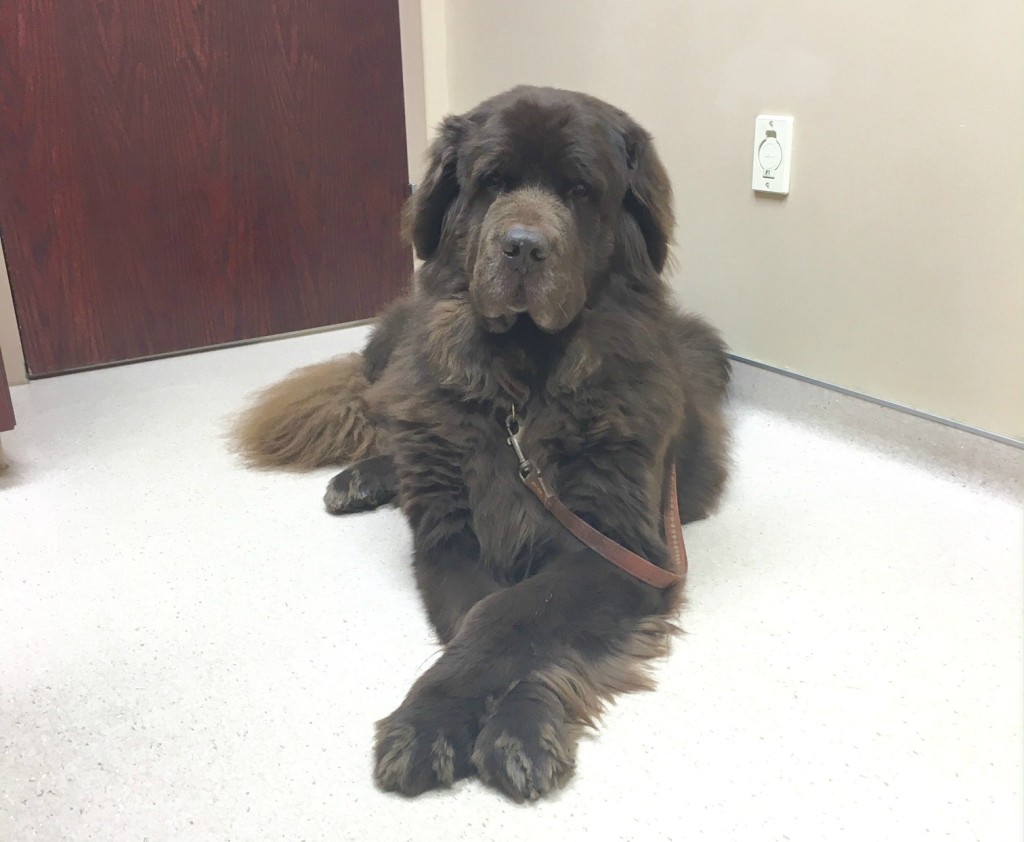 I know that many of you have been following Leroy’s health status since he got sick so since he had a senior wellness exam last week I thought I would give you the results.

To be honest, we were a little late getting his senior exam. He was suppose to go in the beginning of Summer but I kept putting it off because it was so darn hot. We finally had a break in the heat so I scheduled his appointment a few weeks ago and wouldn’t you know, I scheduled it on the hottest day of the week!

Oh well. It was early in the morning so we were able to beat the heat for the most part.

Leroy’s been doing well so I really only had a few minor concerns. Of course after I said that his ear infections have greatly improved, one flared up in his right ear so I wanted that addressed. I was also concerned a little bit about his weight. Over the past month he seems thinner and bonier to me. I keep looking at him and feeling him and I finally just came to the conclusion that he’s just lacking undercoat. He looks thinner to me in the rear but he also has only a top coat going on right now and his muscle mass is fine. It was still in the back of my mind.

So here’s how the exam went:

Leroy weighed in at 157 pounds which at first alarmed me. I thought his last weight was 170 so that would mean that he lost 13 pounds which would explain his bony appearance. I’ve cut back his food by a 1/2 cup but that shouldn’t have resulted in that much weight loss.  The first thing I mentioned to the vet when he came in was that I was surprised Leroy lost so much weight but the vet looked back through Leroy’s records and said that he was 161 pounds at his visit so he’s only down 4 pounds. That made me feel better.

Then the exam took place.

The vet gave Leroy a good check and felt that, besides his right ear, he looked great.

I think his exact words were, “He looks really good Jen.”

Music to my ears!

Then the vet took Leroy in the back to treat and medicate his ear, draw some blood and catch some urine.

Right ear-yeast and bacteria infection. That’s the normal for Leroy. The treatment of choice for the ear was a medication called Claro. It’s a single dose that lasts 30 days.  “It is indicated for the treatment of otitis externa in dogs associated with susceptible strains of yeast (Malassezia pachydermatis) and bacteria (Staphylococcus pseudintermedius).” I know that there’s another one dose medication out there that we used before but it wasn’t this one. The one we used before was messy and gross. This one is more like a gel that coats the ear. I can barely tell that it’s in there and there is nothing oozing out.  I know that there’s a lot of you out there that have Newfs that suffer with chronic ear infections so I wanted to make sure that I shared this!

I’m excited to see how it works! I hope it works because if it does that would be awesomesauce.

All of Leroy’s bloodwork came back good except for the protein levels. Since Leroy has PLE, protein losing enteropathy, this is the most important level for him. His protein is low. Not dangerously low like it has been in the past but lower than the vet would like to see it. This means that Leroy is losing protein again, which could explain his drop in weight. We’ll have to watch this very closely so the plan is to recheck his protein levels in one month. If the protein continues to drop we will have to take action and get him on some medication. If the protein level is the same or has gone up we’ll continue to monitor but no action will be needed. I’ll add that Leroy isn’t showing any outward symptoms right now. His stool is normal, he’s not vomiting, he is eating well and he does NOT have edema.

Leroy’s urine came back with red blood cells and mild blood. There was no infection present so this rules out a UTI.  Based on all the other tests, this is most likely due to his prostrate being enlarged.  The vet suspects BPH, Benign Prostatic  Heperplasia. BPH is a common issue in intact male dogs.  Most male dogs will be affected by BPH after 8  years of age and it usually isn’t painful for the dog. Some dogs some will never show any signs which is why it is important that intact male dogs be checked regularly by their vet.

Signs of BPH are blood in the urine, straining to urinate, straining to defecate, ribbon like stools and prostatic infection. As the prostate gets bigger, it expands backwards. If there’s a lot of enlargement, it can block the rectum, causing the dog to strain while defecating.

Sometimes an enlarged prostate pushes forward rather than back and presses on the urethra. This can cause a dog to strain while urinating. Neutered dogs do not suffer from BPH.

So the plan with this is to get an ultrasound done on Leroy’s prostrate when we recheck his protein levels.

The treatment would be to have Leroy neutered or to give him a medication that would shrink the prostrate down to regular size. At this time I have to wait and see what the results are to make a decision but we would most likely chose the medication verses putting Leroy’s body through the strain of another surgery, but again. I’m trying not to think too far ahead until we know for sure what is going on.

So…………that’s that. It’s not the great results that I was hoping for but I know it could be worse.

I’m honestly more concerned about the protein being low than anything else right now.

If you have any questions, let me know in the comments. I’ll be happy to answer.

I just wanted to let you know I put your sweet potato chews recipe on the recipe app Whisk. If you're not familiar with it, it's an app that you can store all (at least I do) your recipes. You can organize them however you decide. I have a file for pups and put this there. Other people might see it, especially my friends. I think I got it all right and I list your site as the source.

Glad to hear the exam went well and sorry about the protein level! I believe you will be better soon.

Oh I really love the picture! You look like a gentleman Leroy! Glad to hear that you are better now.

Oh Jen, I'm sorry to read about Leroy's protein levels! It's a good thing you and the vet caught it now! Here's POTP to at least stabilize it. And that the ear infection and prostate issue heal quickly. You know you're all in my thoughts and prayers.

I'm glad that the exam went relatively well! I'll keep my fingers crossed that you get good results at the next protein check!

Thanks so much Beth! We truly appreciate that!