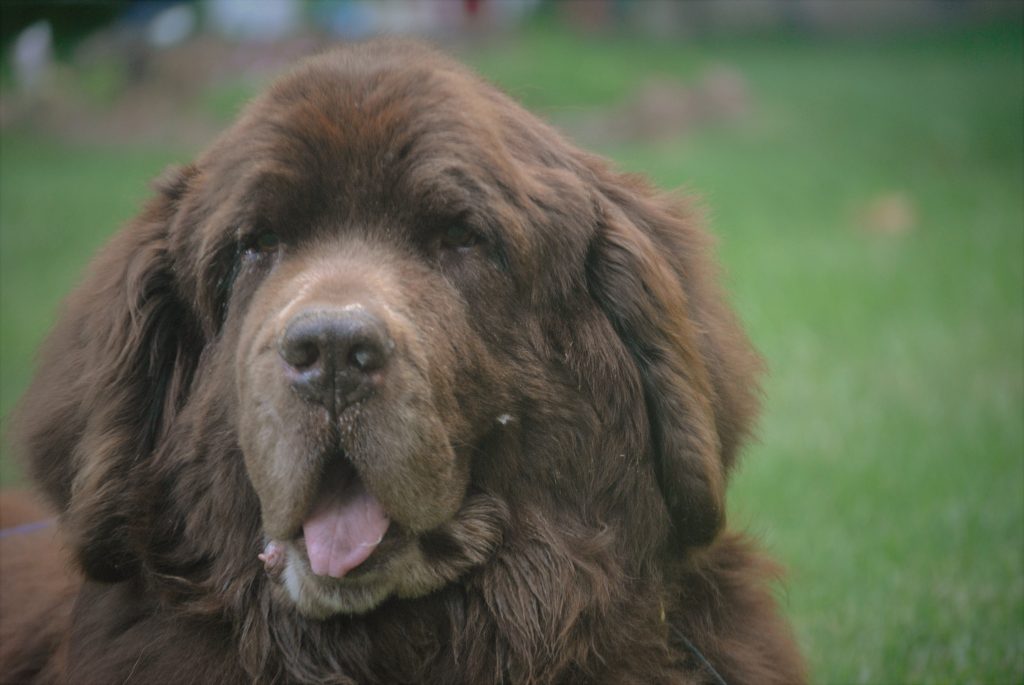 As I sit down to write this, I don’t even know where to start.

I thought I had it all written out in my head but now that I’m here, it’s gone.

I guess we’ll just get straight to it.

With Leroy’s last update I said that I thought he was going to beat this and when I wrote that I believed it with all my heart but I didn’t know what the next few weeks had in store for us.

As I had mentioned 4 weeks ago, Leroy’s pancreas was inflamed and we started a lower fat diet, added in B12 injections, increased the steroids again and continued with the Metronidazole.

Increasing the Pred was killing me because I felt like it was doing what it needed to do for the IBD but it was destroying everything else.

Over that time Leroy’s mobility got worse, he hasn’t been upstairs in over 3 weeks, we had to move his food bowl downstairs, he got a decubital ulcer(pressure sore)  and I cursed the Prednisone and started to slowly wean him down. 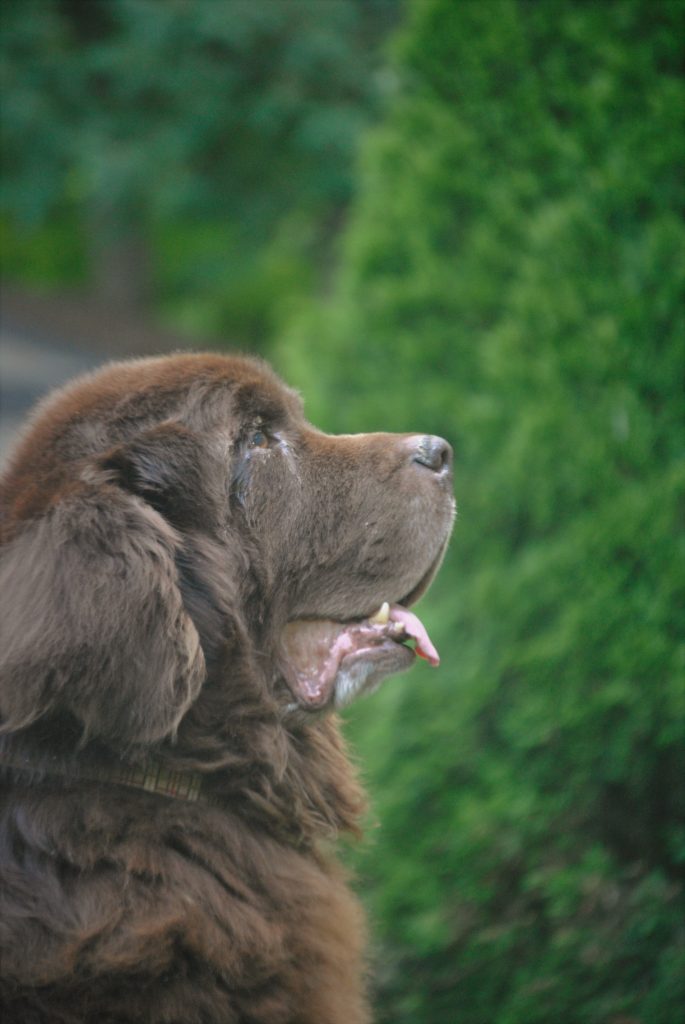 He continued to eat and have normal bowel movements.

He was very listless the other day, panting, coughing a bit and then he collapsed on me.

I knew things weren’t good and we headed to the vet.

We were either going to come home with him or we weren’t.

Leroy was not able to walk into the vet clinic on his own and had to be carried.

He weighed in at 121 pounds which was down almost 20 pounds from his last visit.

When the vet came in and saw him he looked at me and said, “We need to run his blood. If his protein is still dropping it’s not good and I don’t think he’ll be able to rebound from being this bad and we’ll need to make some hard decisions. If his protein is improving but something else is off, we can work with that. “ 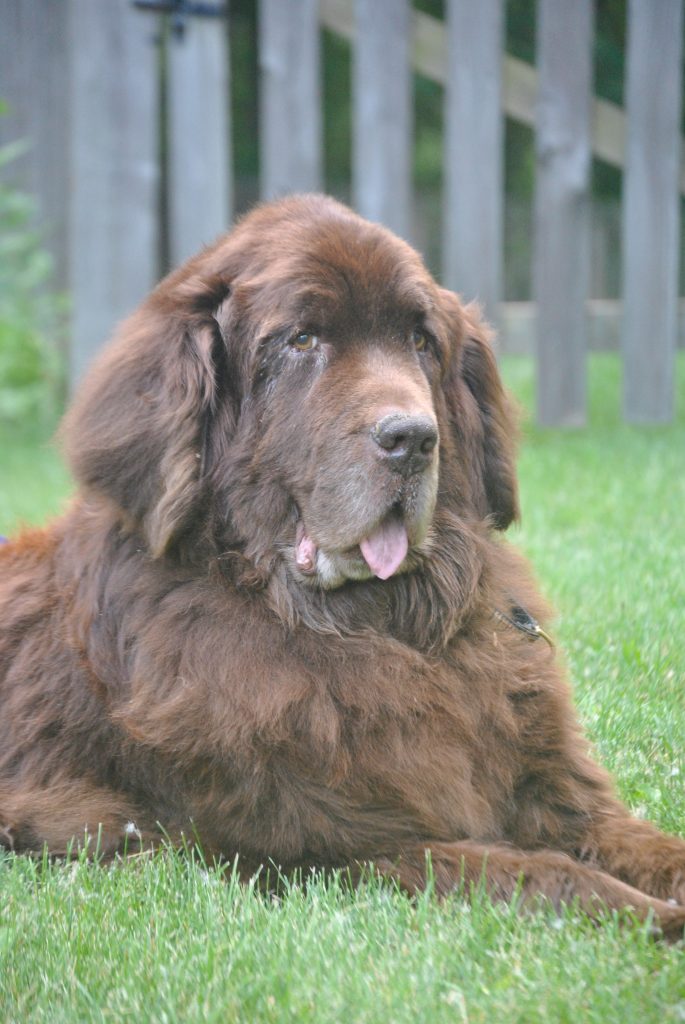 As I waited the dreaded 1/2 hour for the results I went over things in my head.

His protein was going to be up. I knew it. His stool was normal, his stomach wasn’t gurgling, he was down weight which would have been the fluid build-up weight.

As the minutes ticked away I started second-guessing myself.

When the vet walked in I braced myself for the bad news. 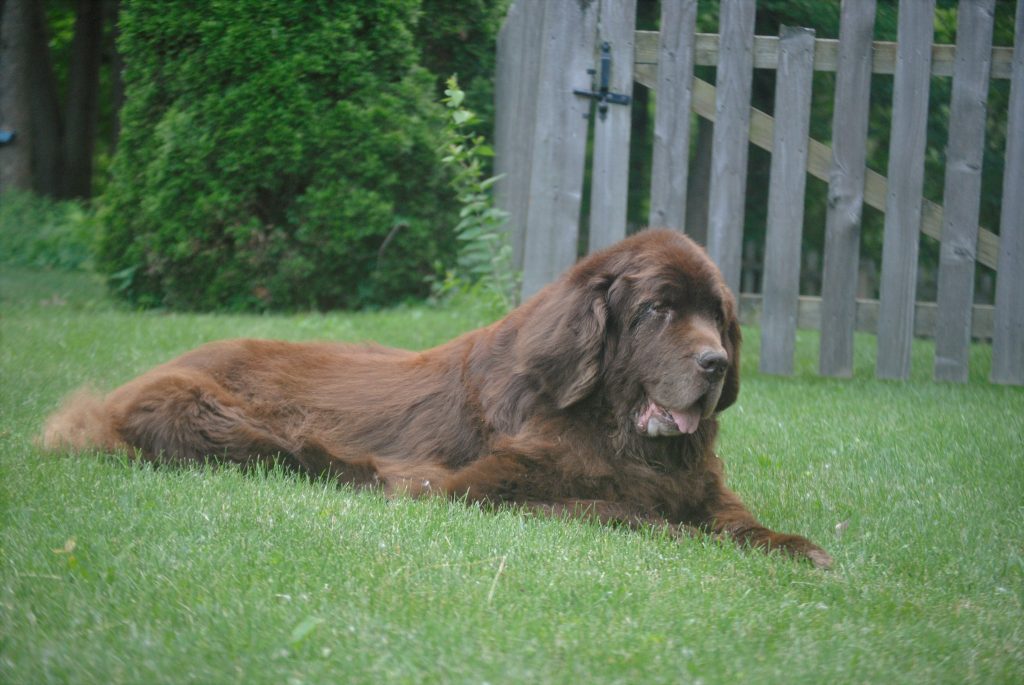 His protein levels were up and they were up good. His Albumin jumped from 1.6 to 2.2 which is still below normal but it’s awesome for Leroy. The only thing elevated was his white blood cells, which combined with the low-grade fever he had, suggests an infection.

So……….the vet said that was the best case we could have right now BUT we needed to change some things.

First,  we need to get him on a course of antibiotics and then we have to get him off of the Prednisone because it’s done the job and Leroy’s body has had enough of it.

Of course it’s not.

Leroy still needs a steroid to control the inflammation of the IBD and keep his protein levels rising so we are switching him from Prednisone to Budesonide. For those that don’t have an IBD dog Budesonide is a steroid that is often used to treat IBD.  It’s absorbed from the GI tract and may not have as many side effects as Prednisone. Some dogs respond great to Budesonide and some dogs do not. 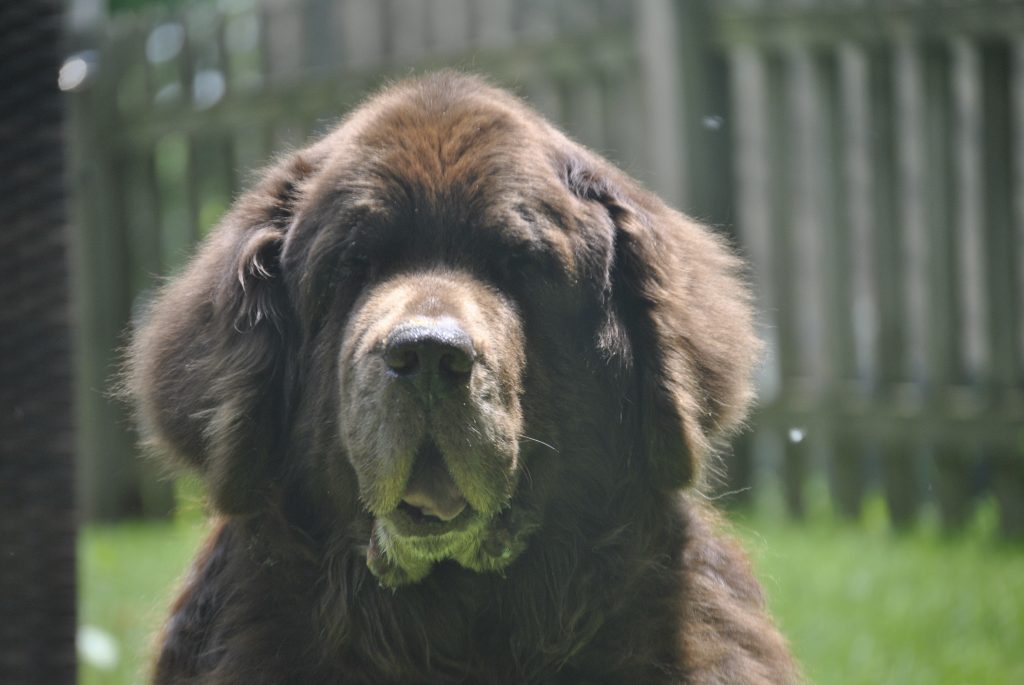 We can’t take Leroy off the Pred until we get the Budesonide.

Budesonide has to be compounded. Leroy’s is on order and will be ready on Tuesday.

In the meantime we are slowly reducing his Pred. We can’t completely take him off of it  because that could send his body into shock.

The antibiotics present another issue.

Sometimes antibiotics wipe out the good bacteria in the gut.

Leroy’s gut bacteria is already teetering so we’ll keep out fingers crossed that it stays toward the good end and doesn’t flare his IBD. (yes, he’s on a probiotic)

Leroy has a decubital ulcer(pressure sore) on his left rear leg. We’ve dealt with these before and they are a pain in the ass and very hard to heal. Even though I’ve been treating it and wrapping it, this could where the infection came from. 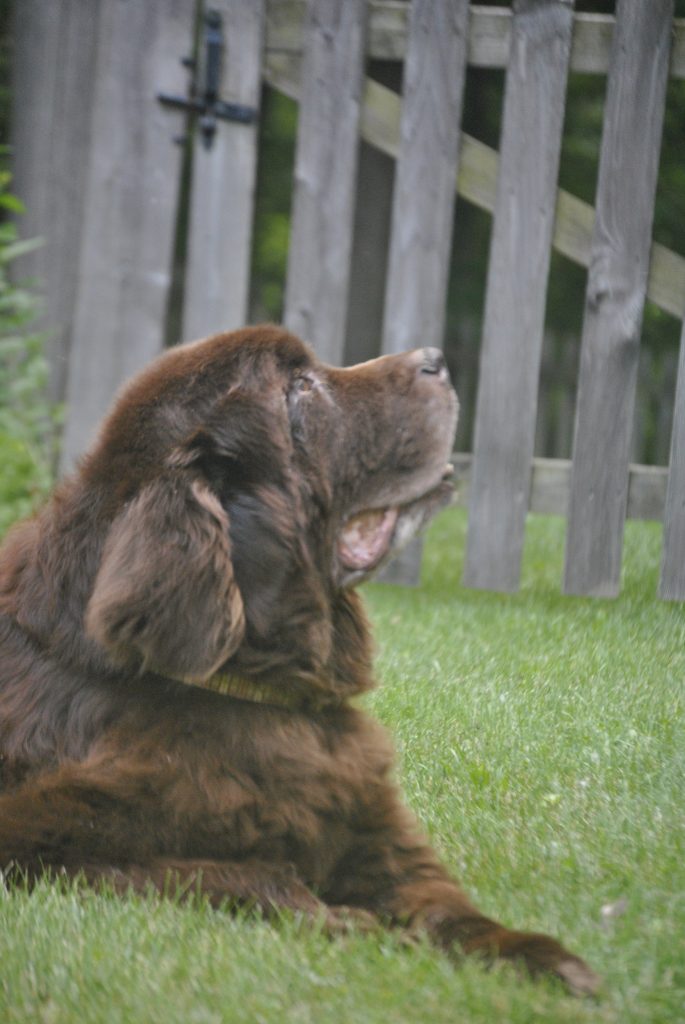 He can’t walk without total support of his backend at the moment.

He’s knuckling with his left rear paw. If you’re unfamiliar with what knuckling is, I’ll go into more detail in a future blog post, but it’s basically when a dog’s paw folds over and he walks on top of his paw instead of on the bottom. I have video of it and I’ll  show you later.

This knuckling is causing him to fall when he walks because he’s so weak.

Why is he knuckling?

We don’t know at this point but it could be that it’s from the muscle wasting that the steroids have caused or it could be something more serious. 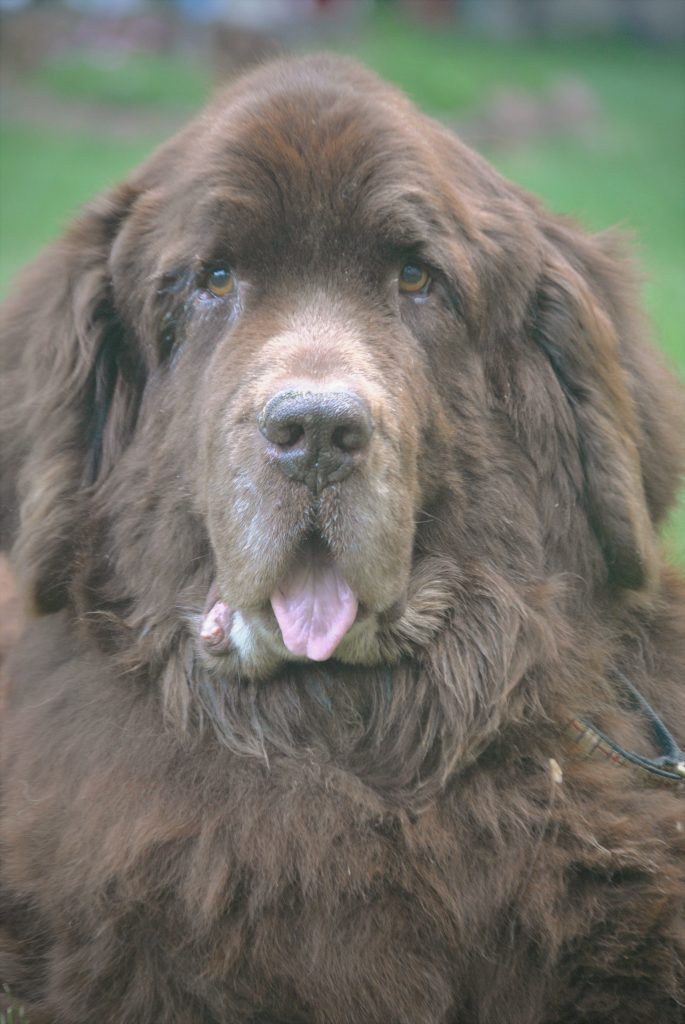 Getting Leroy off of Pred is key to seeing if he’s going to recover. The Pred is compromising his immune system right now and while it did the job of healing his gut, it’s destroying the rest of him and he’s wasting away.

I don’t know what the outcome is going to be.

Right now, Leroy is about the same, maybe a bit better. He’s still eating well and he’s more alert but he’s weak, needs assistance walking and is fighting an infection. He’s mad too. He doesn’t like being like this.

I spoke to the vet yesterday and we were both hoping to see more of an improvement by now but we have to wait and see what happens when he gets off the Pred and on the other medication.

If Leroy responds well in the next week, he’ll have a long road ahead of him which includes getting muscle and weight back on all while being on a low-fat diet.

I wont lie to you, he’s getting tired but he still has some fight left.

If he continues to knuckle, we’ll have another obstacle that we may or may not be able to overcome. We are getting to the point where we have to decide when is enough.

Thank you so much to everyone for all the messages, prayers and hugs. I’m happy to answer any questions that you have.

I’m sorry it took so long to give you details. I’ve been recovering from a bout of pleurisy and between that and Leroy I’ve been exhausted.

p.s. All the pictures in today’s post were taken last week. If you’re wondering why his head looks weird, he has “pred” head or “cone” head caused by muscle wasting. He could still walk to the garden then. He can’t now, but I’m hoping he will.

p.p.s If you’re wondering why we didn’t put Leroy on the Budesonide sooner, I was told that Leroy was in a critical state with his albumin being so low and pred works better in conditions like that.

I admire your tenacity in caring for Leroy and hoping there was a cure. I have a friend going through the same disorder . My wish for you this new year is a cure for Leroy.

I just read this post today because our dog was throwing up rocks this s.m. I pray that Leroy is well. You have clearly been an incredible, compassionate pet parent.

Connie - Tails from the Foster Kittens

Sending purrs of healing and comfort to you both. I hope you have wonderful news in the coming days but if it is not to be I hope you have lots of quality time before that comes.

Thank you very much for the sweet words Connie <3

Sending you and Leroy power of the paw to heal and get strong again.

Thank you KB. We are sending that right back to sweet Shyla <3 I hope she is feeling better soon.

He is so beautiful. Love the profile pictures. Sending hugs and prayers.