I’ve had a few people over the years ask me how I get pictures with the dogs wearing a hat and since today is St. Patrick’s Day and I just got done taking pictures of Odin with his hat on I thought it would be a great time to share!

Before I get started I’ll state the obvious.

Sherman was one of those which is why he rarely made an appearance wearing a hat. He didn’t mind bow ties but hats weren’t his favorite.

Despite that, I was still able to get a handful of him pictures wearing a hat but they were mostly when he was older and he determined that wearing a hat for 1 second was worth the treat at the end. 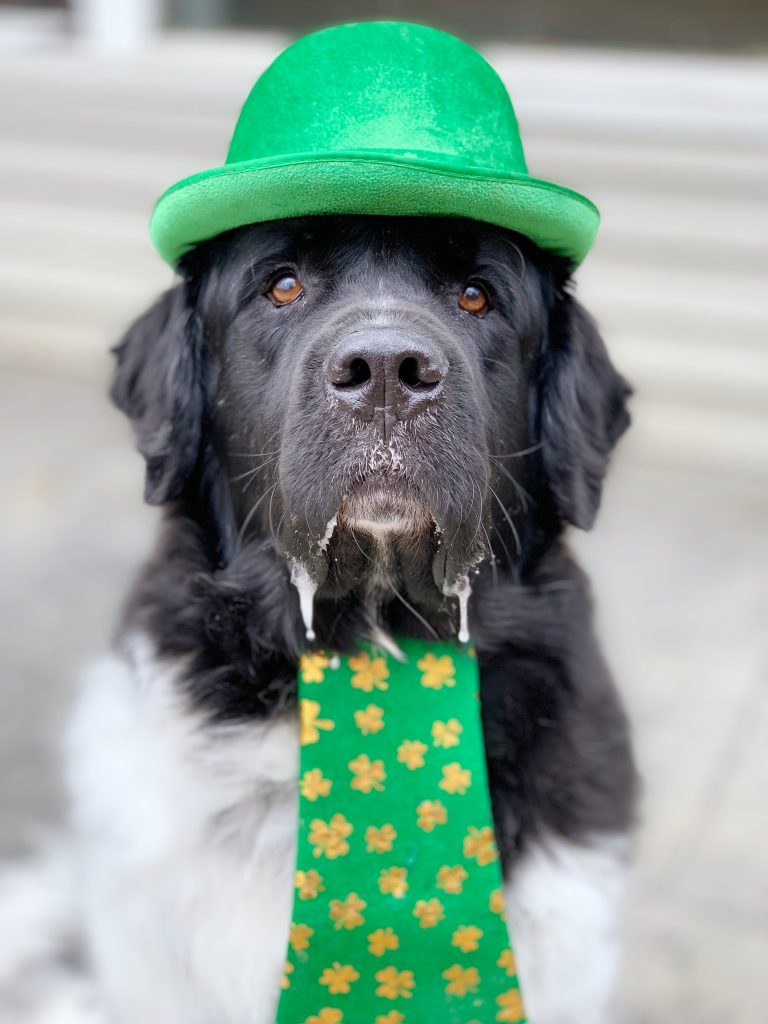 Your Dog Should Know Basic Commands.

If your dog knows basic commands such as sit, stay and down it’s going to make this a lot quicker for everyone.

If they know these commands and actually practice them, you’ll be able to get that perfect picture within seconds.

If you have a dog that has not mastered sit and stay just revisit this when they do.

A hat is not an everyday object to a dog so instead of just pulling the hat on and placing it on your dog try introducing it over a period of time.

Let them know that it’s not something that is bad.

Put it in front of them.

Reward them when they sniff it.

Take it away and do the same thing the next day.

Place it on their head. If they leave it, reward them.

The Shape Of The Dog’s Head Matters

Sherman had a massive round head so most hats didn’t fit him and whenever he would move it would just fall off. 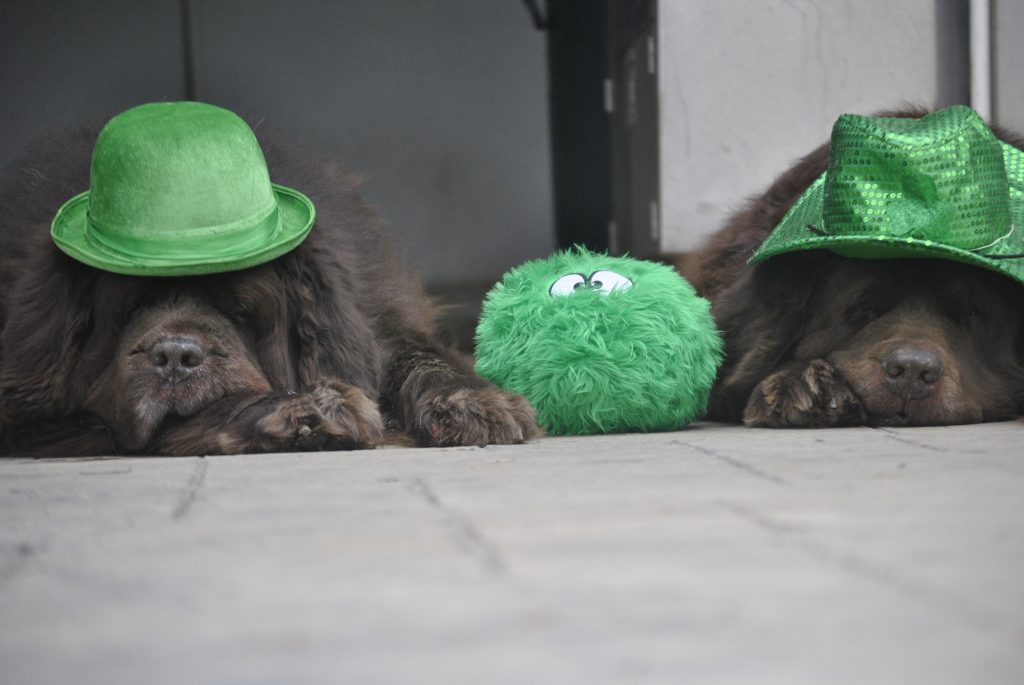 Leroy had a massive head but it was also more blocky so it was pretty easy to get a hat to rest on his head even when he moved.

Odin has a small more blocky head which makes him the perfect candidate for wearing a hat!

The Hat Matters Too!

Baseball hats have worked well for all of my dogs.

The shape and the flexibility just work well not to mention the rim helps to balance it out.

Top hats also work but the size has to be just right.

I’ve found that the smaller the top hat is the better.

Cowboy hats have been the hardest for me to use. They’re just an odd shape and don’t balance well on a dog’s head. 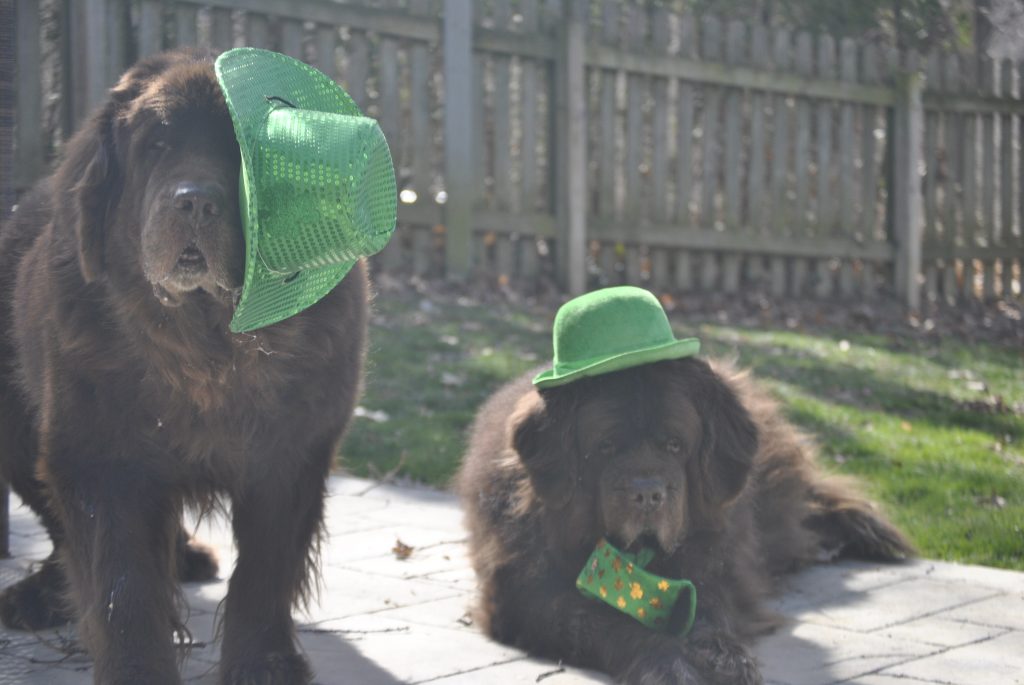 Hats that have an elastic band to keep it in place don’t make that much of a difference with a Newf as Leroy demonstrates in the above picture.

They can knock anything off with their paw and once they’ve been doing this for a few years they will know that all they have to do is flip their head down and the hat is off no matter what.

Position the hat where your dog can see

Don’t put the hat so low on the head that your dog can’t see. 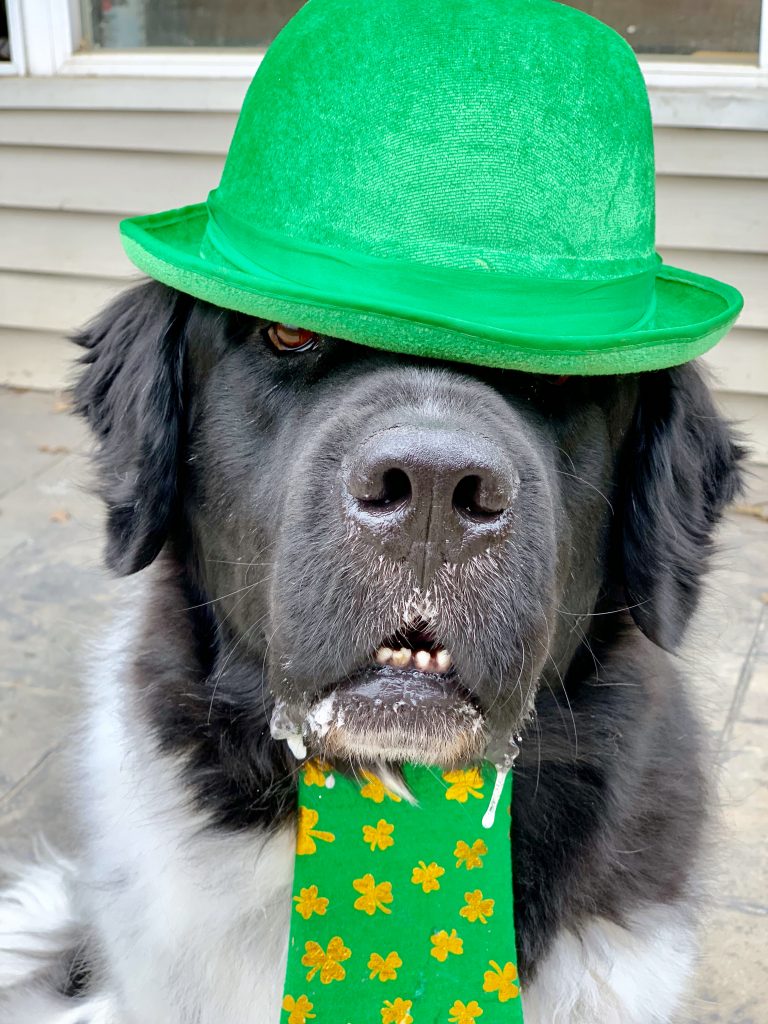 They want to know what’s going on and they want to see that treat so don’t cover their eyes!

The 2 positions that have always worked for me are being eye-level with the dog and above the dog.

You want your dog looking straight ahead so the hat doesn’t move.

Place the hat, take a few steps back, kneel and take the picture. 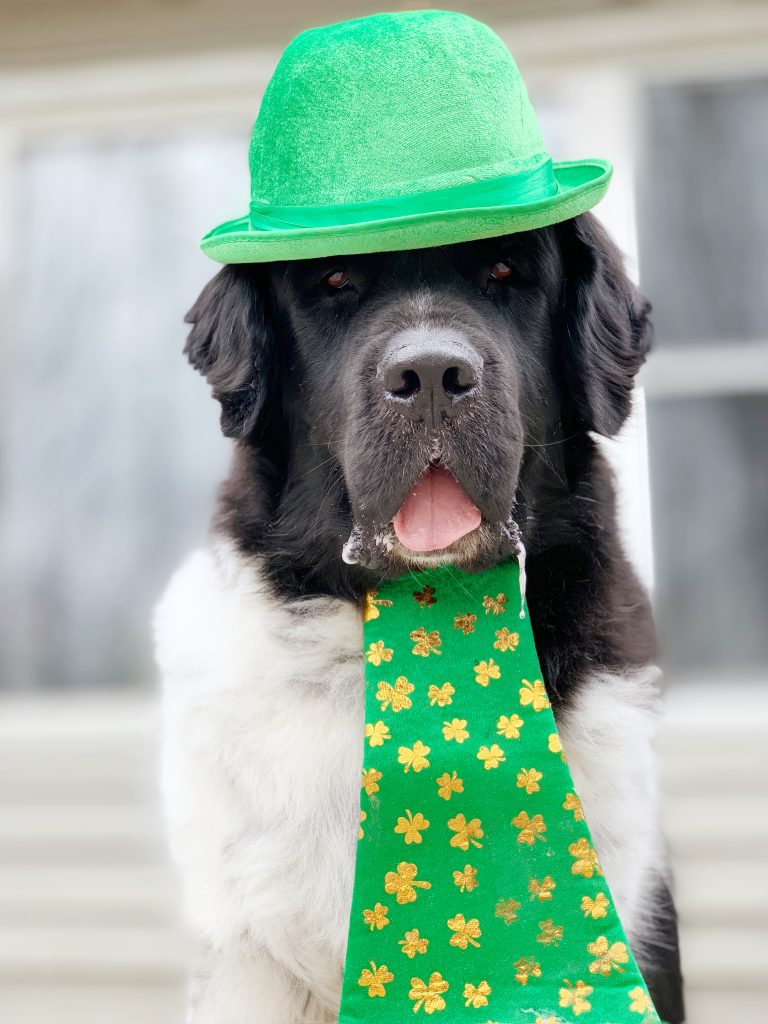 If you’re feeling dangerous, stand up, hold the treat in front of, but above your dog’s head, and take the picture.

The hat might move or you may have the luck of the Irish and it won’t!

The quicker you can get the picture the better.

Most dogs are only going to sit there for a few seconds so you need to snap and treat as fast as you can.

It doesn’t have to be straight!

Some of my favorite pictures with the boys in hats are when the hat is crooked or almost falling off.

It gives the picture character and it’s always going to be cute! 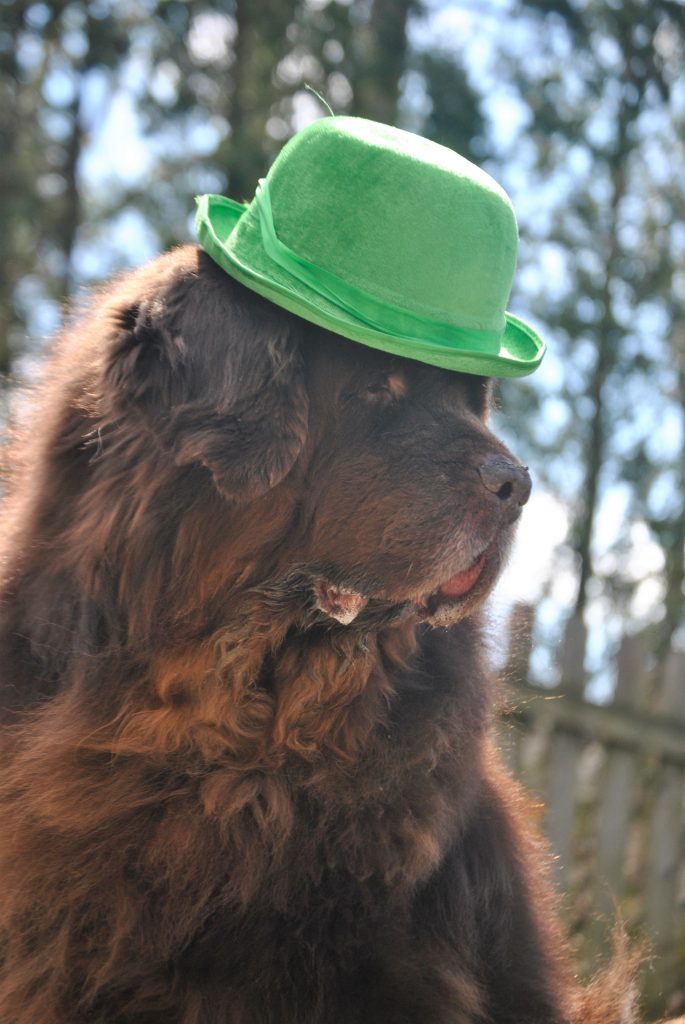 Know When To Give Up

If you are getting frustrated and so is your dog, give up.

Try placing the hat next to your dog and go with that.

A Few other tips

Obviously use praise or a treat reward for your dog.

Let them know that you have the treat but don’t keep the treat in the hand that you are adjusting the hat with.

I did this yesterday with Odin and every time I would adjust the hat he would try to sniff my hand with the treat and the hat would fall off. 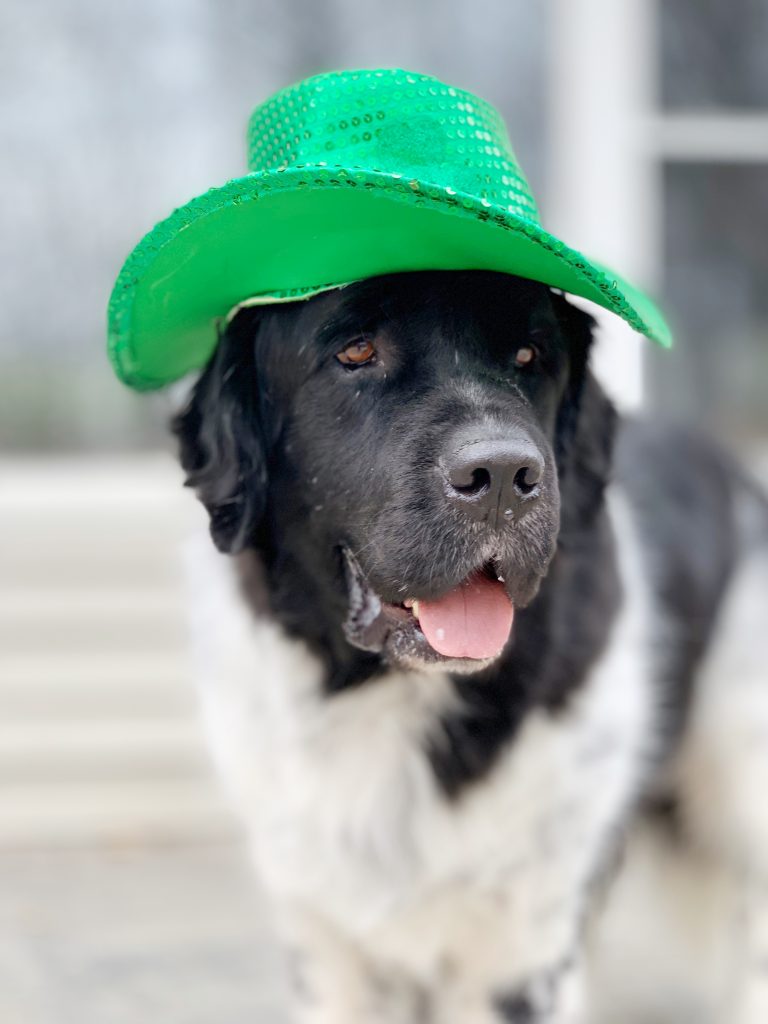 It seems like common sense but when you’re trying to move fast you can forget.

Instead, put the treat in the hand with your camera and try to hold it right at the top part of the phone so your dog knows where it is.

And last, remember that for every good picture that you take, there will be a hundred that weren’t that good!

Those are my tips on how to get a hat to stay on your dog for a cute picture.

It sounds more involved than it looks for sure and I want to make it clear that I work on things like this over a long period of time.

Let me know if you have any questions!

p.s. I had thought about not using the green top hat for Odin since I had used it with Sherman and Leroy for so many years but I think it’s kind of cool that it has now been passed down to Odin. <3

Such adorable photos. Yup, whenever photographing dogs, you need LOADS of Irish luck!

Great photos of Odin wearing the green hats! I think it's wonderful that Odin now wears Sherman's and Leroy's hats - they look so natural on him!