Well, we did it and I’m so excited to introduce you all to our newest addition-Lou!

Before I get to all the “Lou” things I want to tell you how hard it was to keep this a secret from you.

I’ve never been a good secret keeper and this was more painful than you’ll ever know but I wanted this little brown nugget in my hands so that I wouldn’t jinx a single thing because I’m a paranoid freak like that.

Lou has been in the making for quite some time.

There was always going to be another brown boy but I had no idea when that was going to be a reality and if I’m being honest, I wasn’t sure when I would be ready. 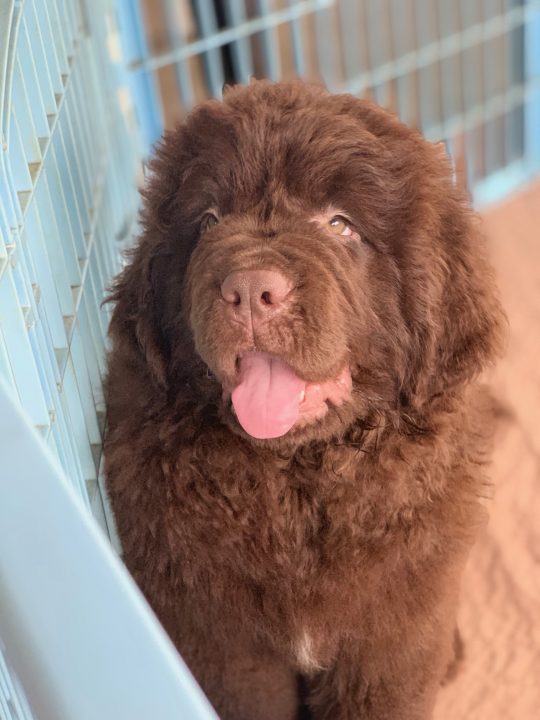 His registered name is Majestic Trail’s U Have The Right To Remain Silent.

Lou was born on April 14th and he was 1 of 4 brown puppies and the only male born in the litter. 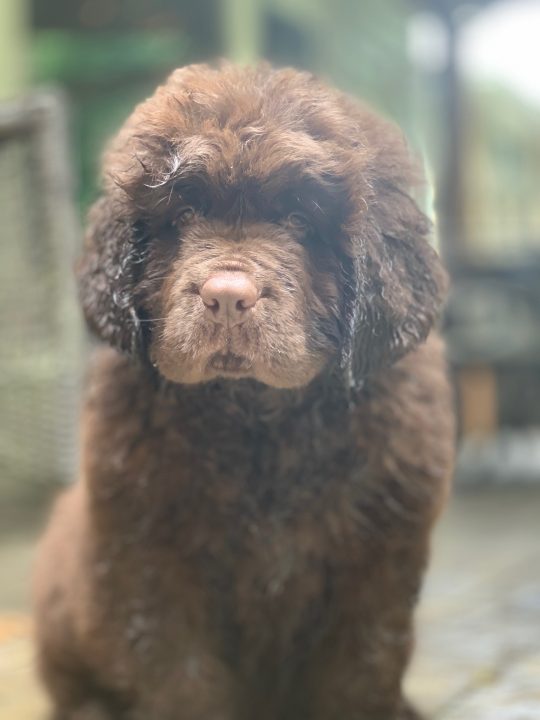 Finn is obsessed with him but Odin has yet to interact with him.

I know that Odin will come around on his own time.

Lou’s current weight is 28 pounds. (as of yesterday afternoon) 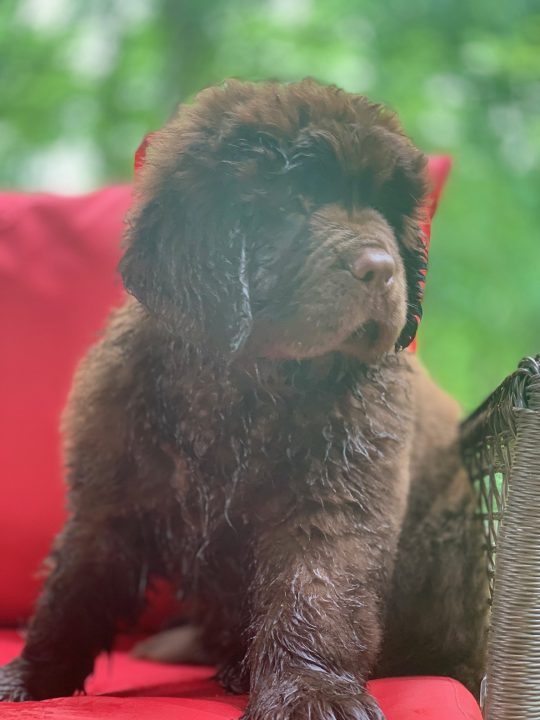 He’s also a floor vent hog and he didn’t waste any time finding all the vents in the house and plopping his chunky brown body on them.

When he’s not sleeping on top of an air vent he’s sleeping in the water bowl. 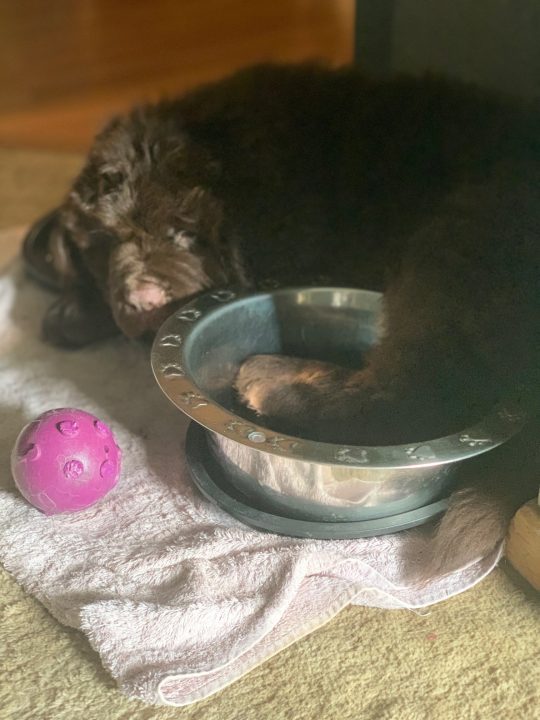 Lou’s personality is all Newfie.

He’s goofy, sweet, clumsy, outgoing and he knows how to use his weight to his advantage.

He seems very adventurous, not afraid of much and he’s smart because in less than 48 hours he’s already picked up on a lot.

Crate training is in progress and I’m working on trying to have a good system-Finn is an obstacle because he likes to bark which leads to Lou barking/whining/mooing….etc. 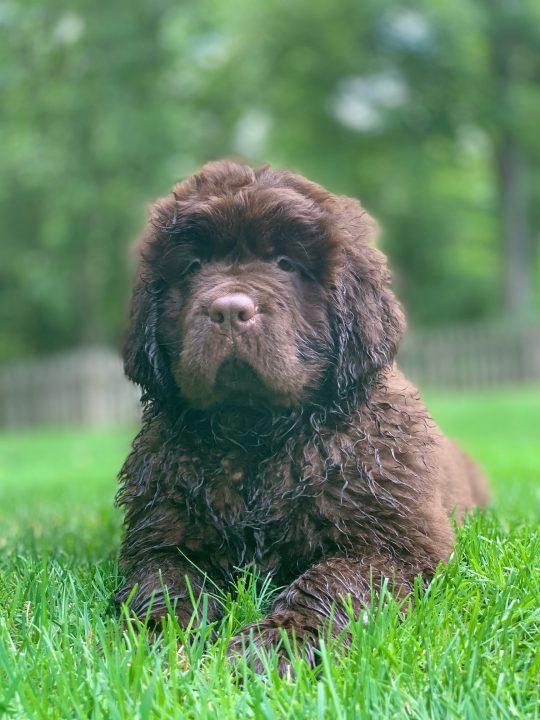 And yes, Lou can bulldoze Finn and Finn knows it.

I’m so excited that Lou is here and I’m excited to bring you along on this journey with us!

Now onto some of the most frequently asked questions that I’ve seen come through:

Lou is from Majestic Trail’s in Pennsylvania, however, I do not believe that there are any brown breedings planned for the next 1+ years. (check the NCA breeder’s list or reach out to a Newfoundland Ambassador if you’re in search of a brown Newfie breeder) 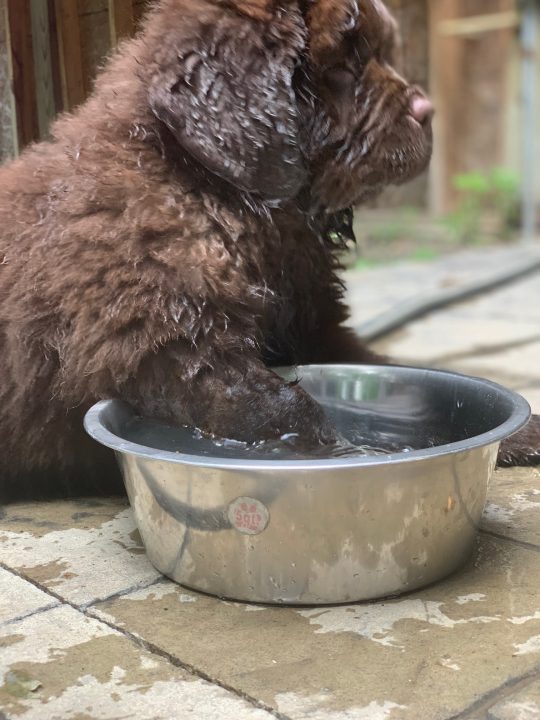 Yes, Lou and his littermates were cleared by a cardiologist before they went to their new homes.

Yes, we plan on competing in conformation with Lou.

We are feeding Lou what his breeder was feeding him which is Royal Canin Large Breed Puppy.

I’ll keep him on that at least until he’s done with all his puppy vaccines because his poop is great right now and I don’t want to mess with it!

I learned of Majestic Trail’s when I attended Newfoundland Nationals in 2019.

I saw a gorgeous brown boy walking the grounds and tracked and had to find out who it was.

From there, a friend reached out, pointed me in the right direction and I finally made contact with the breeder last year. 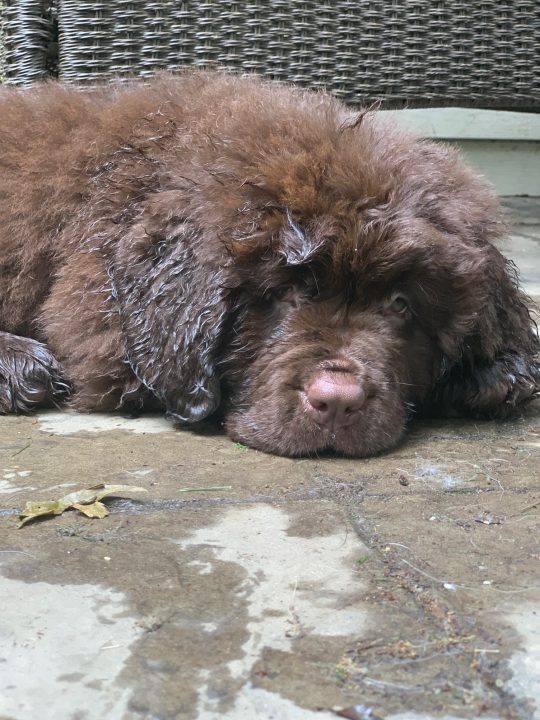 I’m currently doing all the puppy things: introduction to the grooming table, paw and ear handling, short grooming session and even a little nail trim….etc.

For the rest of the week(month), we’re going to work on setting a routine, establishing a positive team dynamic and of course crate and potty training.

I’m tired, a little overwhelmed, soaked with water but so damn excited and in love <3

If you have any questions that I didn’t answer, please feel to reach out or ask here!

I've been following the puppy journey on your Instagram. Congrats on the new guy. I'm right in the thick of puppy training with you. It's so tiring and stressful. Sometimes I wonder why I do this to myself? haha! I will be interested in reading about you showing Lou in conformation. That's not something I'll be doing with my current dogs but I find it interesting.

Looking into getting another newf this sept. Max will be 17months old and my only fear is how the heck will the puppy and I get any rest because I know max won’t leave him alone 🤪

I’m so happy for you!! He’s just so handsome and floofy and wet! Congratulations!

I'M SOOOOO EXCITED!!!! Lol. So, you kinda stalked that brown newfie to find out where it came from-did I read that correctly? :)