With the addition of Lou, I’m finding myself investing in even more dog products than I have before.

Not only am I looking for puppy products but I’m now I’m also looking for slow-feeder products, dog bowls that don’t tip, fun but also durable dog toys, and anything else that catches my eye.

One of the most daunting searches is finding a dog toy that is suitable for a puppy but will also hold up to an aggressive chewer that resides in this house (Finn).

Finn is the most aggressive chewer that I’ve ever had and he’s gone through more toys than I want to remember.

Plush toys are definitely out and from here on out, any plush toy that I buy for Odin or Lou will have to steer clear of the Finn monster. 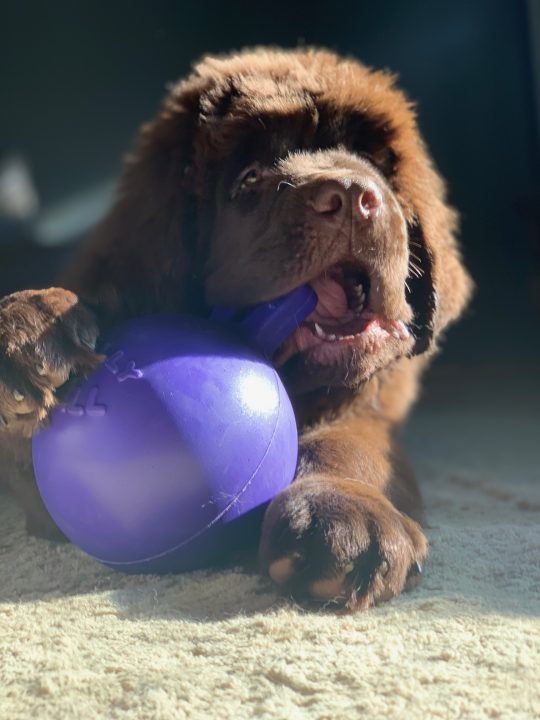 As far as non-tip bowls go, Lou seems to have already outgrown this stage, at least for now but after hours of searching for something I thought might work, it was a big fail.

The concept was great, it just didn’t work for us.

Slow-feeder bowls were somewhat of a challenge too because they were either too small or too big for Lou, but I find one that works really well.

I purchase from Amazon a lot due to the ease of it, so I thought it would be fun to share some of the wins I had over the last month and some of the fails.

Let’s take a look at some of the wins in the Amazon dog product category.

The wins definitely outway the losses which is good for me and hopefully good for you if you’ve been searching for some similar products.

I think I’ve finally found a decent and durable toy for Finn and they’re made by a company called Monster K9 Dog Toys.

So far I’ve purchased the ring and the kettlebell ball and they’ve held up to Finn’s chewing.

I purchased the ring so Finn and Lou could play tug and once I saw that it was going to hold up to Finn, I got the kettlebell.

I liked the kettlebell because Lou likes to carry things so he can carry it around and Finn can chew on it.

Finn tried REALLY hard to destroy it and he focused on the seam.

He was only able to get a few very tiny pieces off despite the hours of chewing time he’s already put into it but I’m happy with it so far.

They have a handful of products to choose from and their products come with a lifetime guarantee.

They also aren’t overpriced compared to other durable toys on the market.

The fetch disk and the boomerang are my next purchases.

As I mentioned before, Lou loves to carry things so I’m trying to offer him things that he can carry inside the house and outside the house.

He loves the Jolly Balls but Finn has already chewed the handle off the ones we have.

I decided to buy 2 more. 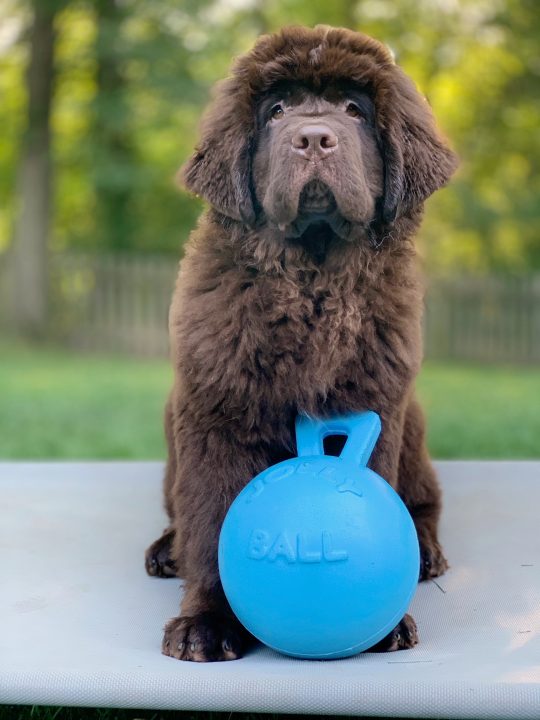 Finn is allowed to play with these but he’s not allowed to chew on them.

I ordered the large light blue one because it smells like blueberry and I also got the medium purple one for inside use.

I ordered these from Amazon but they’re available at a lot of other places like Chewy and Tractor Supply.

Some of you may remember that last year I ordered the electronic flapping fish for Odin and Finn and it was a big hit.

Of course, it didn’t survive Finn but Lou needed a fish too so I ordered him the Clownfish. 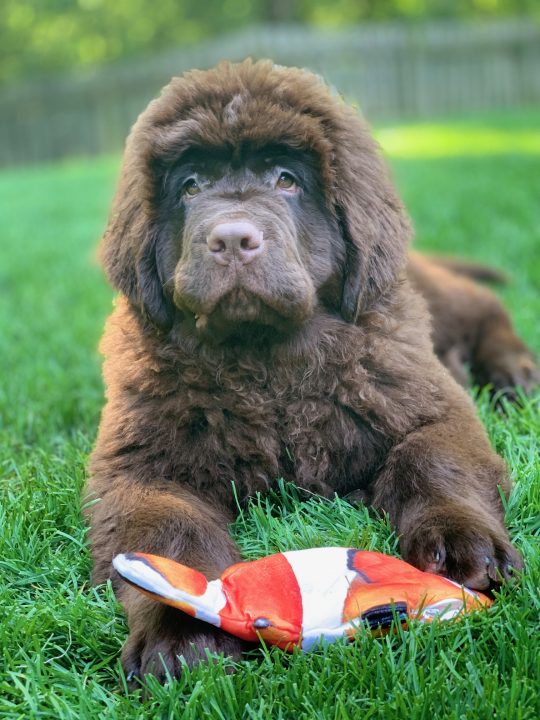 Finn doesn’t know this toy exists in our house.

Lou only plays with it when Finn isn’t around.

We’ve had an issue with Lou inhaling his food so fast that he was vomiting.

Don’t worry, a $700 vet visit ruled out any sinister causes so Lou earned a slow-feeder bowl.

It’s not easy finding one for a growing Newfie puppy but I was able to track one down at Petco and it was on clearance.

This is the perfect size for Lou right now and it works well for him. 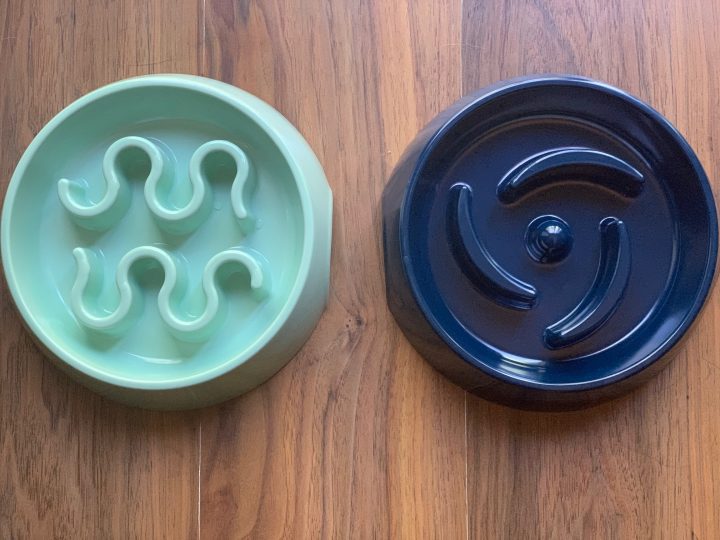 We started with the mint one.

I like the material it’s out of and it’s held up really well over the past month.

I went back to buy another one, a different design, but they were all sold out but I found them on Amazon.

I ordered the navy one so Lou has some variety. (size large).

Lou will of course become a Duo Gear harness dog just like Odin and Finn but not until he’s done growing.

So until he can fit into one of the smaller larges that we have, a different harness will do.

At the recommendation of Lou’s breeder, we ordered the WonderPup Soft Mesh Dog Walking Harness in a size large for under $10. 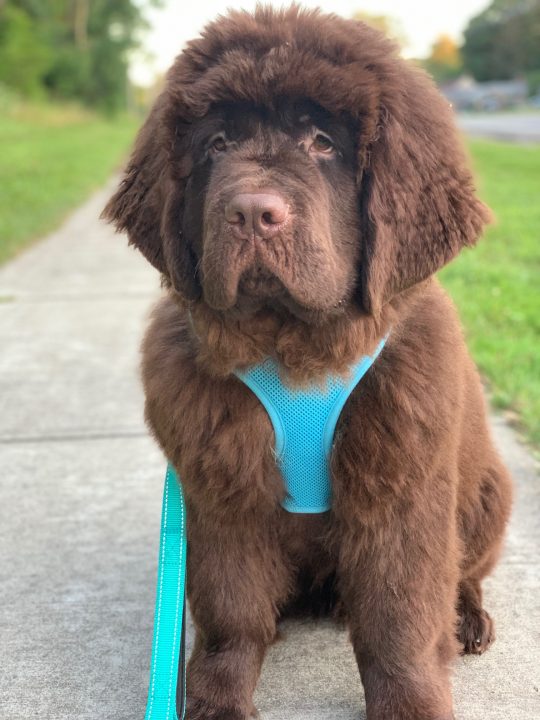 Surprisingly the one that I bought to bring Lou home in, still fits so I think it’s a great and affordable option for a fast-growing puppy.

I got Lou the Large and he still fits in it at 45 pounds but he probably won’t fit in it at 50 pounds.

I wrote about this topic a few months ago and it’s worked pretty well to repair the urine burn patches in our backyard.

It’s easy, affordable and specifically made to repair pet spots. 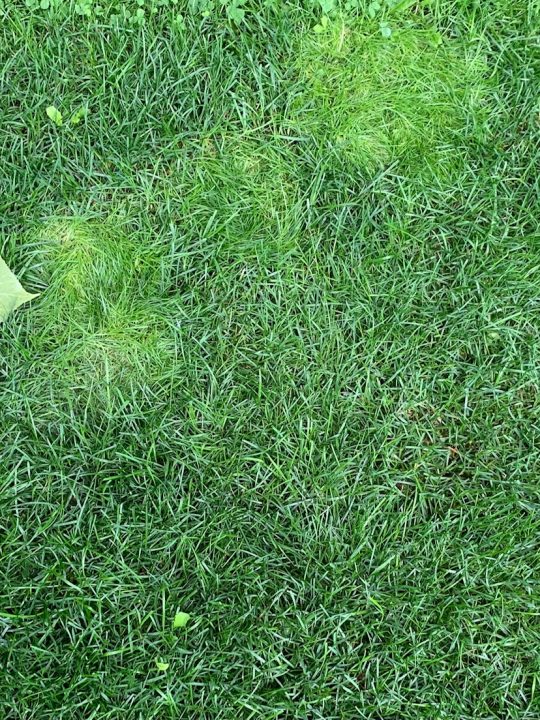 I could not find this specific type in any stores around us which is why I ordered it off of Amazon.

Works in a pinch!

I was looking for an easy and cheap way to try and stop the water spills.

I have a ton of different style dog bowls but I just needed one for this phase of Lou’s life.

Nothing I had done up until this point had worked so I was desperate.

This looked like a great idea but it was not. 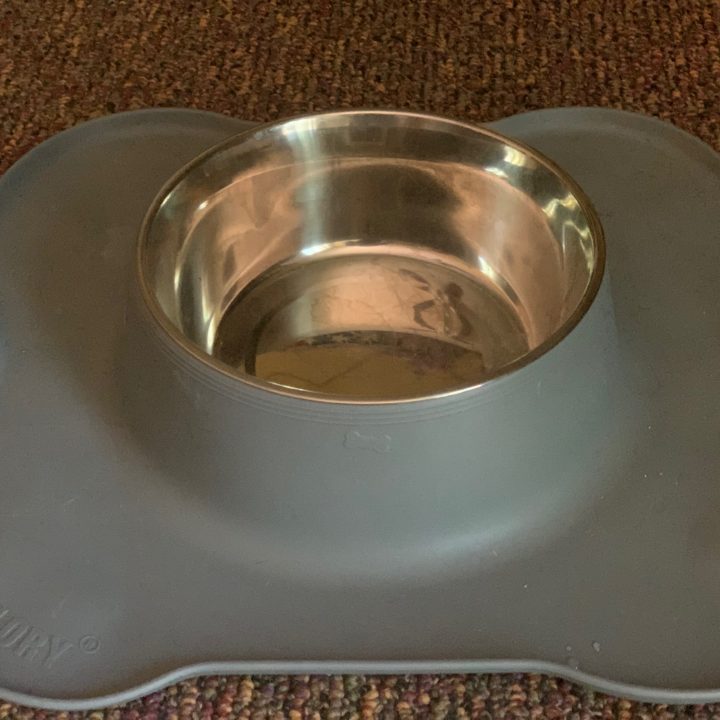 Lou picked the mat up (filled water bowl and all) and carried it across the kitchen.

Next, he just lifted the water bowl out of the mat.

I really like the concept of this but it didn’t work for us.

I love the concept of the Slow Feeder Insert For Dog Bowls.

I thought that this would be a great option without having to change Lou’s bowl set-up. 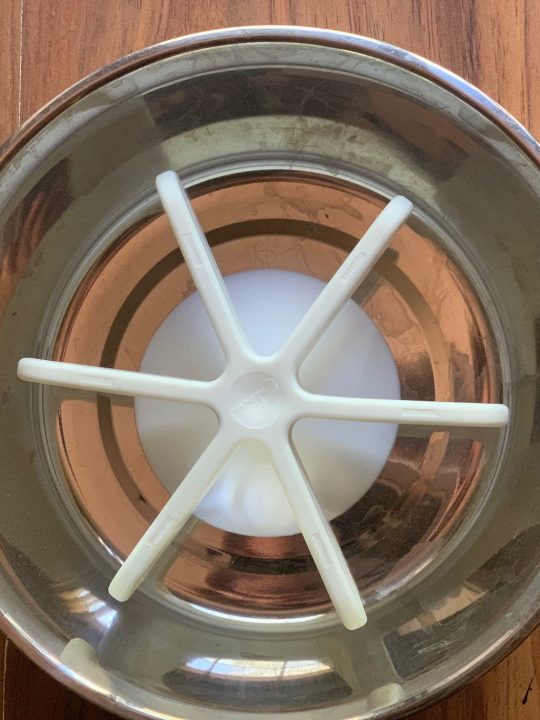 It has suction so it’s supposed to stay stuck to the bottom of the bowl.

Lou picked it up and threw it across the room.

There were of course, many other fails that I purchased from local pet stores like the Tonka Tug.

It’s” durable as the Tonka brand name” but apparently, Finn is tougher.

Not Amazon-related but I did stumble across a new Jack-o-lantern Furballz when I was placing my Chewy.com food order.

I’ve seen only seen it available on Chewy and I’m not sure if it’s a limited edition or not so I snagged one.

It’s more for me than for the dogs but I’ll let Odin and Lou play with it under supervision.

I can’t vouch for its durableness just yet.

So there you have it, my wins and losses over the last month!

Maybe my wins will also be your wins!

Hi Barb, I sent you an email!

Hi again! When you brought your puppy Lou home, he fit into the Wonderpup Large harness? How old was he and how big? I want to make sure I'm getting the closest size so I can put it on him for going to the airport and on the plane and especially for the relief areas. Our boy will be 10 weeks, will the Large be the right size or should I get the medium?