In general, corn kernels that are cooked are safe for most dogs to eat in moderation but the corn cob itself is not.

Corn kernels, the corn that has been removed from the cob after it’s cooked, it is safe for dogs to eat.

The corn cob itself is another story and it is not safe for dogs to ingest.

But thousands of dogs a year are given a corn cob to chew on or they find one in the trash and the outcome is an expensive one.

Corn cobs are one of the leading causes of intestinal blockages seen in dogs and if ingested, they need to be removed because they will not break down in your dog’s stomach.

If the cob is not removed, it can turn into a fatal bowel obstruction. 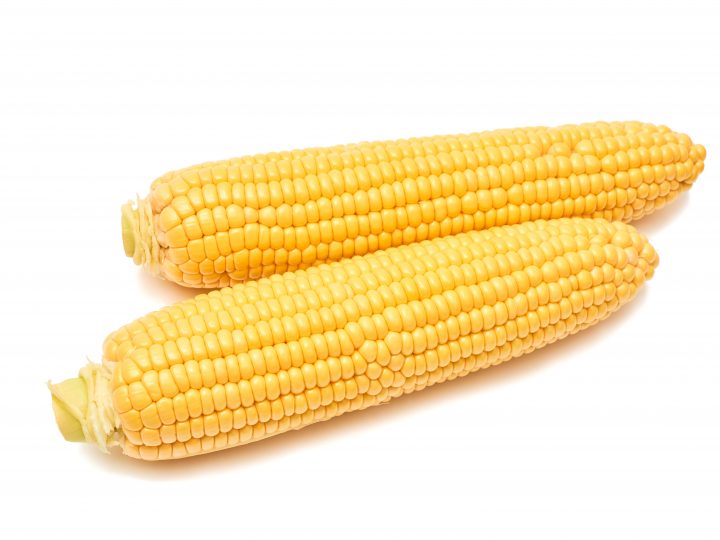 Ohio sweet corn is hitting the farm stands right now and I couldn’t be more excited to get my hands on a few dozen ears of corn.

If you’ve never had Ohio sweet corn you are truly missing out on a delicious side dish for your cookouts.

It’s the sweetest, crunchiest most scrumptious corn and it’s only around for a few short months.

My mouth is watering right now just thinking about it! 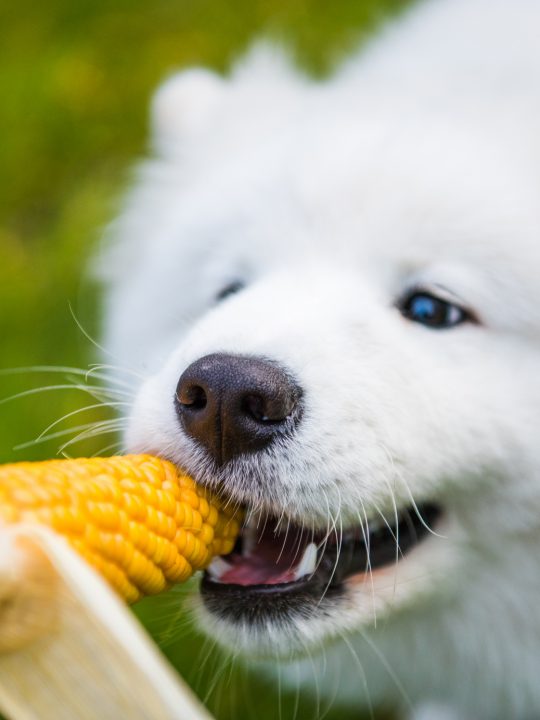 However, having corn on the cob has always made me a little nervous with dogs around, especially Leroy who has been known to eat things like rocks and other items that don’t digest.

The fear of dogs and corn cobs was put into me several years ago when I worked at the vet clinic and one of the receptionists brought her dog in that was very ill.

After being examined by the veterinarian and having x-rays done it was determined that the dog had an obstruction in his stomach.

Off to surgery they went and within 30 minutes a 2-inch corn cob was removed from the dog’s stomach.

They weren’t sure exactly how long it had been in there but the lining of the stomach had begun to rot.

Thankfully after months of setbacks, loads of medications and several rechecks the dog made a full recovery.

This wasn’t the last corn cob I would see be pulled from a dog’s stomach, for some reason that summer they just kept coming. 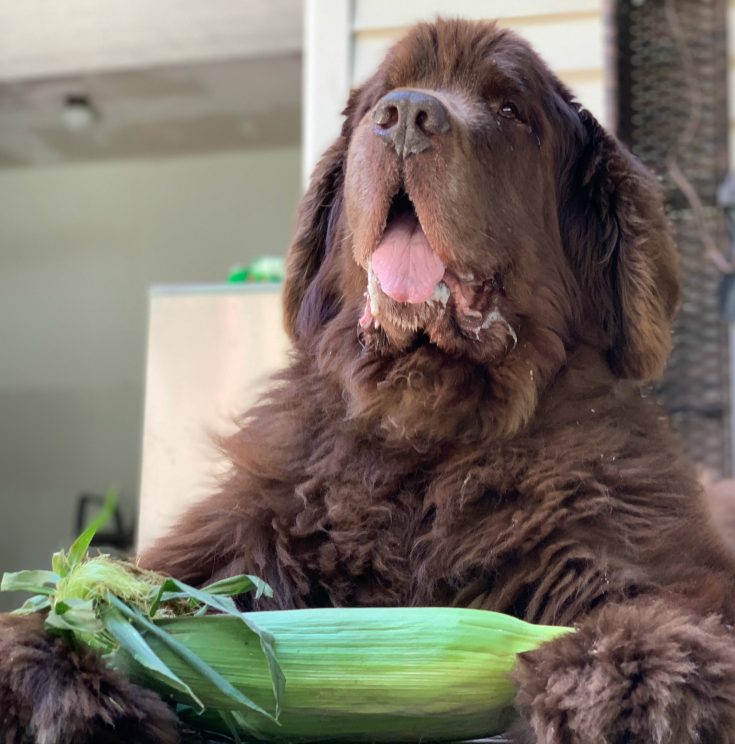 Can Dogs Eat Corn On The Cob?

Corn alone is a carbohydrate and contains several vitamins and minerals depending on the type of corn.

It’s low in fat and calories but whole corn isn’t as easy for dogs to digest as other carbohydrates.

Most dogs can eat plain corn in moderation but the core of the corn should not be given to dogs.

The core is not digestible and if swallowed in big pieces it can be a choking hazard or it can become lodged in the intestines creating an obstruction.

Dogs can get ahold of corn cobs and consume it fast so if you’re going to give your dog some corn off of the cob you should remove the corn and feed it plain without butter and salt since this can cause pancreatitis in some dogs.

Signs Of a Cob Corn Obstruction

When your dog eats, it usually takes between 10-24 hours for the food to move through the entire digestive tract.

Some bigger objects,  like corn cobs, can take much longer.

Signs of a corn cob obstruction can be:

How Long Can A Corn Cob Stay In A Dog’s Stomach?

If a corn cob is not stuck in the intestines but resting in the dog’s stomach it will be there until it’s surgically removed.

This can be weeks or even months if a dog isn’t displaying signs of being sick and if their owner doesn’t know that they ate the cob.

The longer the corn cob sits in a dog’s stomach the more serious the situation can become.

If you know that your dog ate a corn cob but seems fine after a few days, you should still contact your veterinarian.

Just because your dog isn’t showing signs of being sick after swallowing a cob, doesn’t mean that the cob isn’t doing damage to your dog’s intestines.

How To Help A Dog That Ate Corn On The Cob

If you know that your dog ate a piece of the corn cob, contact your veterinarian immediately.

Since a corn cob can be a choking hazard for dogs, it is not recommended to induce vomiting unless instructed by your vet. 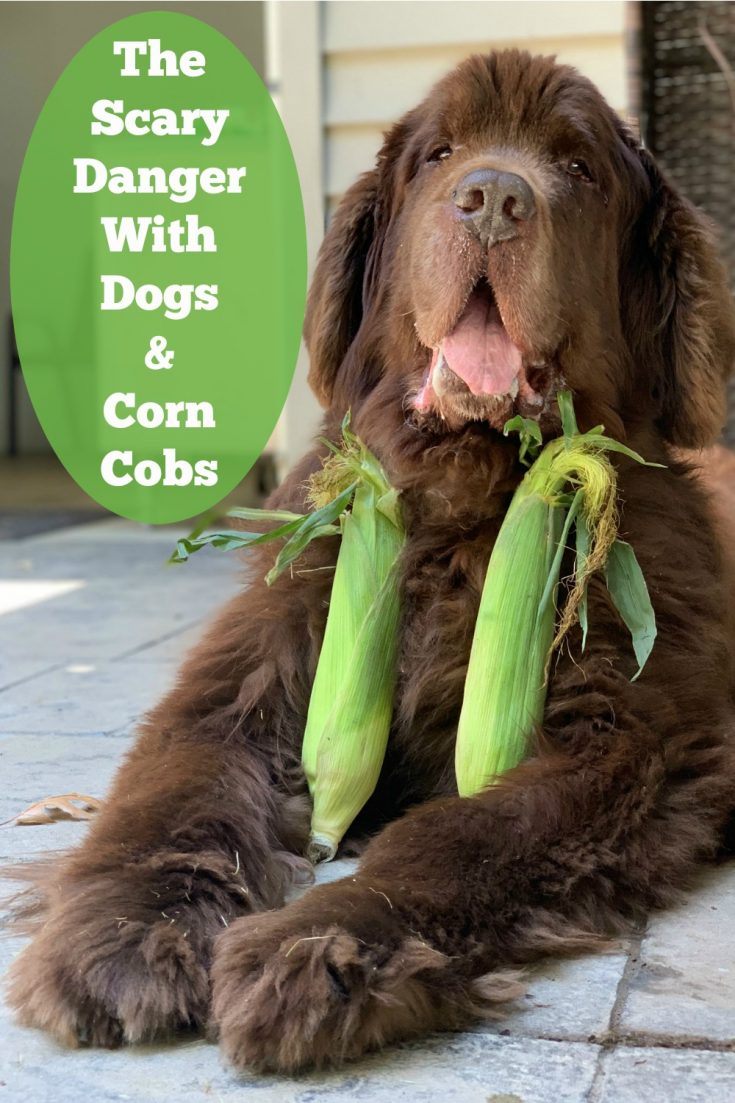 If you have a dumpster diver (garbage can diver) it’s best to dispose of the corn cob in another trash bin that your dog doesn’t have access too and that has a locking lid.

Sherman and Leroy don’t try to get in the trash anymore but just to be safe we place our eaten corn cobs in a small bag and then place them in a sealed garbage can in the garage. 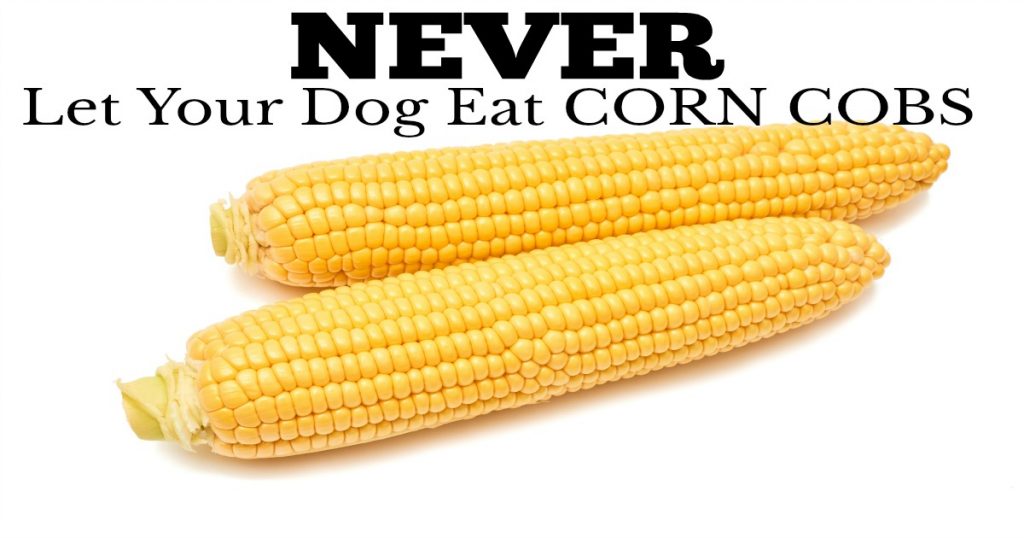 I try not to place them in outside trash bins where raccoons may be able to get them because then there’s a chance that we might encounter that somewhere down the road on our walk.

Watch out for falling corn cobs.

Don’t leave corn on the cob for the birds or squirrels.

There’s a chance they could grab the cob and drop it in your yard.

We don’t have a bird feeder in our yard but our neighbor does.

One day I realized that they were leaving corn on the cob out in their feeder and I politely asked if they would mind not doing that.

They had no problem with my request and didn’t realize that it could be a hazard for dogs.

How Long Can A Corn Cob Stay In A Dog’s Stomach? - The Whole Portion

[…] Vet Warns Dog Owners To Not Feed Your Pet Corn On The Cob https://www.vets-now.com/2017/02/dogs-corn-on-the-cob-dangers/ Help! My Dog Ate A Corn Cob! https://doggiedesigner.com/my-dog-ate-corn-cobs-what-to-do/ The Scary Danger With Dogs And Corn Cobs […]

Top 15 Human Foods That Can Poison, Choke Or Harm Your Dog- Explained - SwankyPaws

[…] It Affects Dogs- According to mybrownnewfies.com, the big risks in a dog eating the core of a corn cob is getting stuck in the intestines, choke the […]

Knowing my Ninja knucklehead, I wouldn't put the snarfing of a corn cob passed Elsa. Luckily corn on the cob is hardly likely to grace the Ranch premises; there are other tasty treats we all prefer that aren't as dangerous.