I used to always get asked for tips on how I taught Sherman and Leroy to get up and stay on the grooming table.

I taught them when they were puppies so I never had any solid tips to give to someone looking for advice.

It’s easy when you have them as puppies but what about a dog that you adopted or a dog that is full grown and has never been on a table but now you realize that it will make life easier for you both if they were on a grooming table.

Well, due to me not being consistent with getting Odin on the grooming table,  I now have a few tips that might help some of you struggling in this area.

So Odin isn’t new to the grooming table.

I know he was on a table at least once before we adopted him because I have pictures of him on one.

We also built a DIY grooming table in the spring and he was on it. 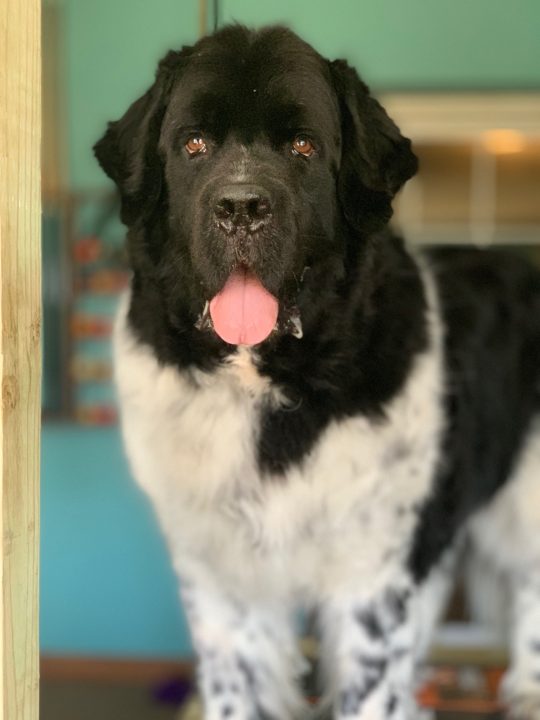 However, after spring I just got out of the habit of putting him up there and when I tried, he would put up a fight, so I the opposite of what I should have done and I just let it go.

But now, he really needs a good trim, blowout with the dog dryer and it’s just about time for him to blow his coat so it’s in both of our best interests for him to get up there and get comfortable with being up there often.

Why Should You Use A Grooming Table For A Large Dog? 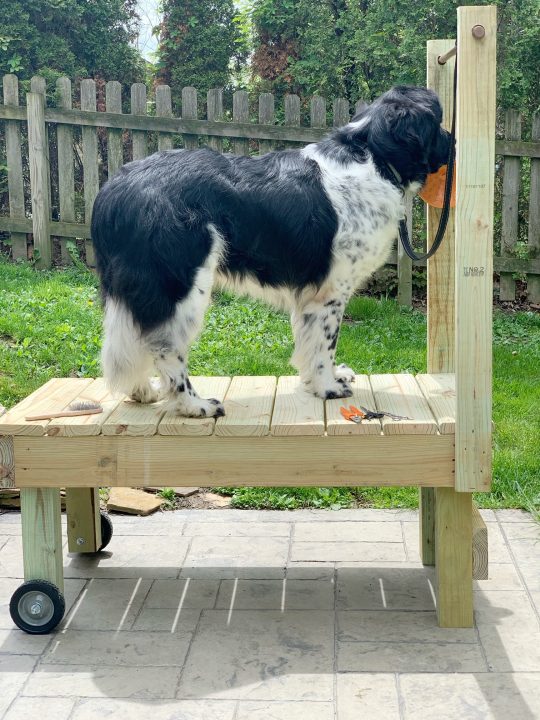 It’s fine to have grooming sessions on the floor with your dog here and there but it takes longer and you can’t get all the important places.

Having a grooming table makes grooming so much easier and quicker.

First, it’s easier on your back and legs.

Second, when you have a dog such as a Newfoundland with a thick double coat that needs regular grooming, it makes getting areas like the pants (butt) and undercarriage a lot easier.

Even if you plan to take your dog to a professional dog groomer, it’s a good idea to have a grooming table at home.

Believe me, your groomer will thank you if your dog is comfortable on the table!

Give Yourself And Your Dog Time 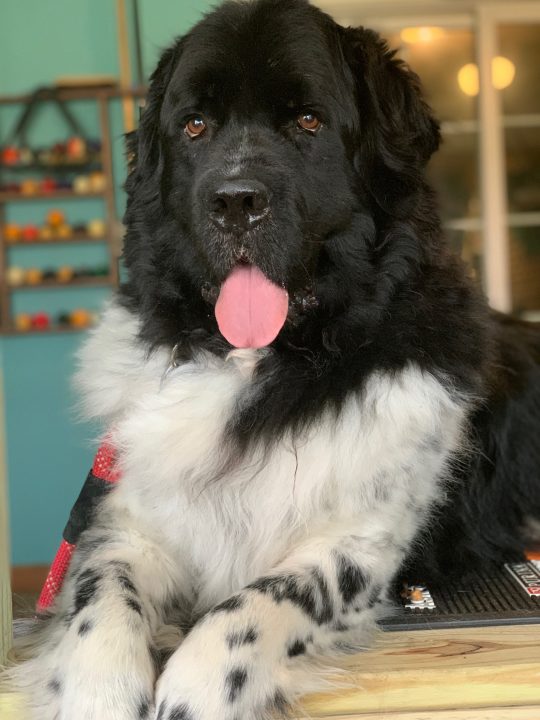 If being on a grooming table is new to your dog then give yourself time to work with your dog.

For instance, I knew in the middle of February that Odin’s coat needed more attention than I was giving it.

I brought the table inside and slowly introduced him to it for over a week.

I wasn’t expecting him to get up there on the first try but I wanted to work towards that a bit each day.

Don’t expect to whip out the grooming table and actually groom on the same day.

Give your dog time and be patient.

I was giving Odin 7 days and he did it in 6, so set your goal reasonable. 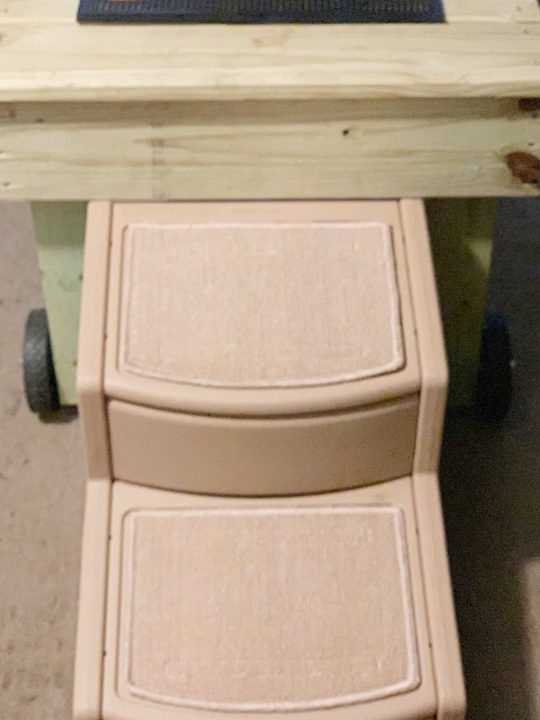 With small dogs, you can easily lift them up and place them on the grooming table but for dogs over 100 pounds, you need a safer way to get them up there.

If you don’t have a grooming table that has an adjustable height and your dog doesn’t want to jump there on its own, you might need to invest in dog stairs or even a dog ramp.

I’ve never had to use stairs or a ramp with Sherman or Leroy for the table.

Odin doesn’t like to be lifted, at all, so that wasn’t an option for us.

He also showed no interest in getting up on his own so I purchased these pet stairs on Amazon for under $30.

They have a weight limit of 150 pounds and I figured if they didn’t work, I could always use them for Finn.

Thankfully, they worked and they were the perfect size for the grooming table. (they even have removable carpet runners so they aren’t slippery)

A ramp is a good option also but if your dog doesn’t already use a ramp, you’ll have another obstacle to overcome. 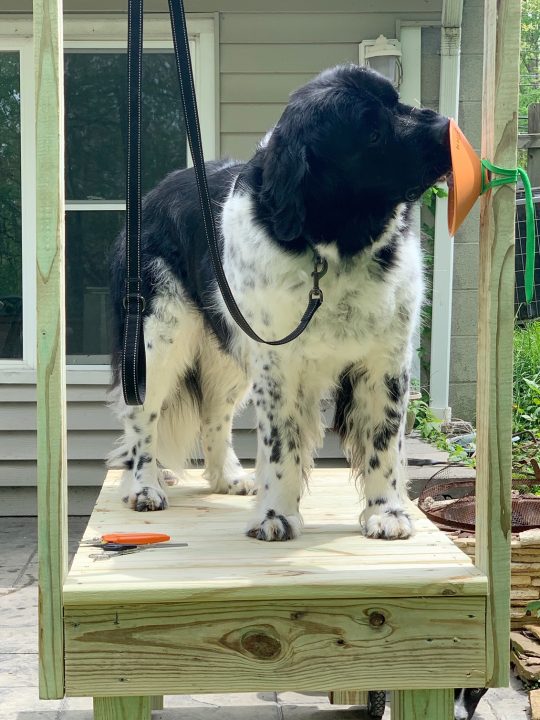 Dogs love to be motivated and some need more motivation than others!

What motivates your dog?

Odin is motivated by food and praise so I used a lot of that!

The treats I used were high-value treats that he doesn’t get every day and I used my most happy “good boy” voice that I could without hurting my own ears.

As soon as they do something positive with the table like putting a paw on it or even sniffing it, reward! (you can also use clickers)

Keep doing this day after day.

If your dog needs constant motivation you can also try using a Lickimat mounted to the table to keep them occupied. Try putting it in the freezer for extra-long use!

Show Your Dog What You Want

On day 4 I realized that Odin and I were struggling.

It was as if he heard what I was saying but didn’t know what he should do.

That’s when it hit me to show him so I walked up the stairs with his favorite treats and placed them on the steps and across the table.

As soon as he saw me up there, it clicked in his head and he walked right up the steps and onto the table!

Dogs are great visual learners so don’t be afraid to show your dog what you want them to do and get up on the table if you can. 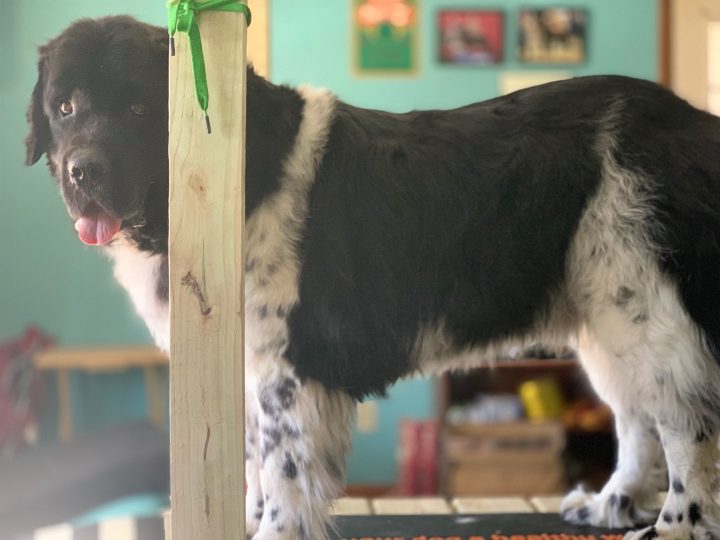 In the beginning, keep your grooming sessions short, sweet and to the point.

Start off with 5-10 minute sessions and gradually increase the time.

You want this all to be positive so make sure to praise your dog and treat your dog as needed.

I started Odin off with 10 minutes sessions and increased 5 minutes each day. 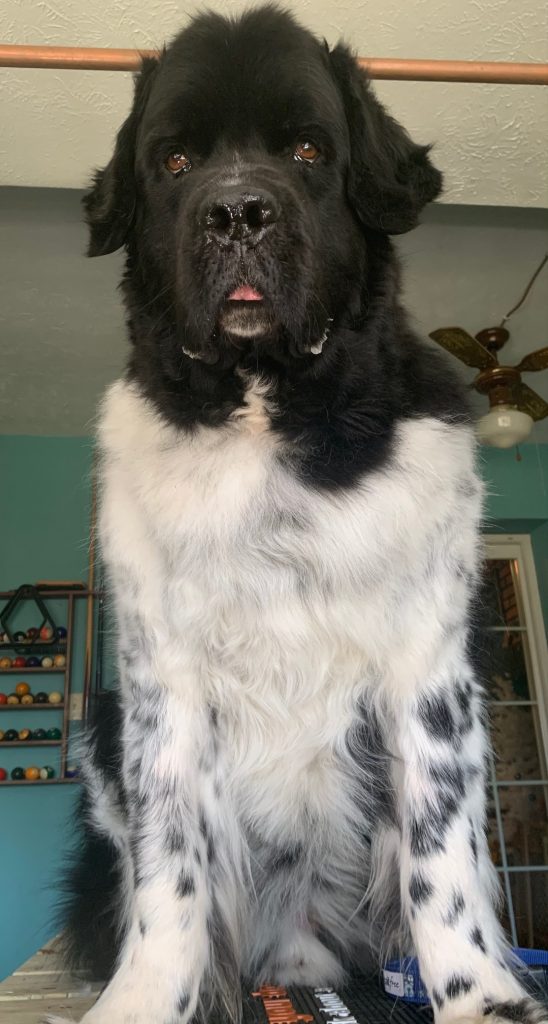 Dogs live by a routine so be consistent with getting your large dog on the grooming table.

Do it every day for at least a week so that they get into a flow.

After a week you can start to back off a little bit but I would still do it at least 3 times a week until they are comfortable.

As I mentioned at the beginning of this post, it’s always best to start your dog on a grooming table when they are puppies but if you’ve adopted your dog or didn’t realize how important grooming was for your dog until later on in their life, it’s still possible to get them up there and comfortable! 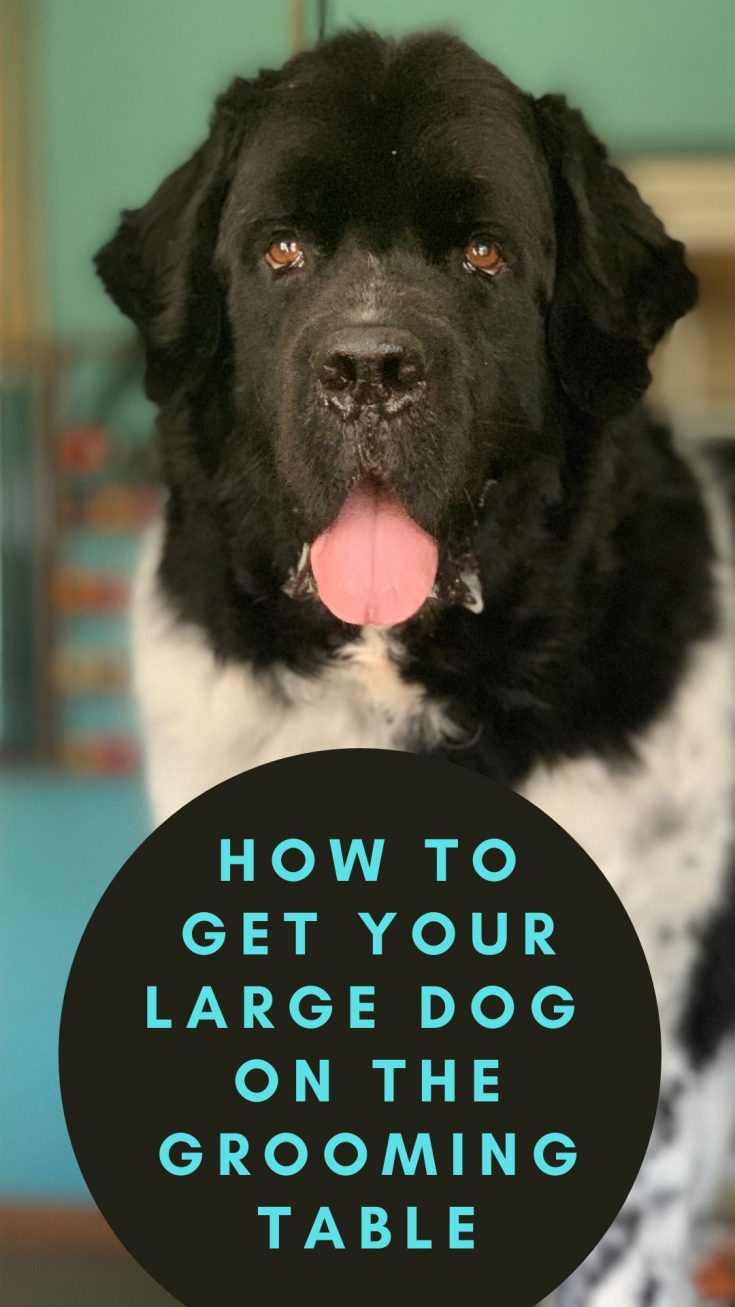 Hi to all, Iam a grandma to 2 rescued newfies. My mail is a landseer, my female is black. They are now 3. I am having trouble finding them a harness so it’s easier on there neck. They dont really pull but i want to make it easier for them.they are wonderful extra large babies , and for there size picky eaters and dont eat that much. They love veggies/ fruits. And only small cookies even the ones i make, they have to be small( what babies they are). My male had a bad experience at the groomer so he is now afraid of everything. My female will get in the tub with you and just lay down, so you have to move over. Trying to find a groomer for them is a real pain, and harnesses. There about 140-145 lbs each. Suggestions would be helpful. HELLO TO ALL YOU FLUFFY BABIES OUT THERE AND US OWNERS( no they own us).