Last week I took Odin and Lou for their second walk together at our local ballpark.

I’ve been going here for walks for many years because it’s a nice area with a walking path.

I was so happy walking behind Odin and Lou with their fluffy wiggling butts.

It brought a huge smile to my face because it’s been a long time since I’ve walked 2 Newfies.

Unfortunately, our walk was cut short because about 1/4 of the way through, I spotted an off-leash dog running wildly through the park.

My anxiety immediately kicked into overdrive.

My palms were sweaty as I gripped the 2 leashes tighter and my heart raced as I tried to determine if the dog was a stray or if an owner was nearby.

After a few seconds passed, I spotted the owner about 600 hundred feet away from the dog.

I moved the dogs off to the side and watched the dog for several minutes.

I decided that it was best if I just headed back to the car but then I noticed the dog running through the parking lot.

Again, I looked for the owner and she was nowhere to be found.

We continued to hang out where we were and I carefully watched the dog as my heart raced.

Finally, the dog went to another area of the park so we quickly headed to the car.

When I had Odin and Lou safely in the car, I drove to the front of the parking lot to look and see if I could find the owner.

As luck would have it, she was rounding the track by the entrance of the park.

I stopped the car and rolled down my window, the dog came running up to my car.

The owner and I exchanged a few words and I drove off.

Thankfully, nothing bad happened but I was fuming.

Because of someone’s lack of respect and not abiding by the leash rules clearly stated at the park’s entrance, my dog’s walk had to be cut short. 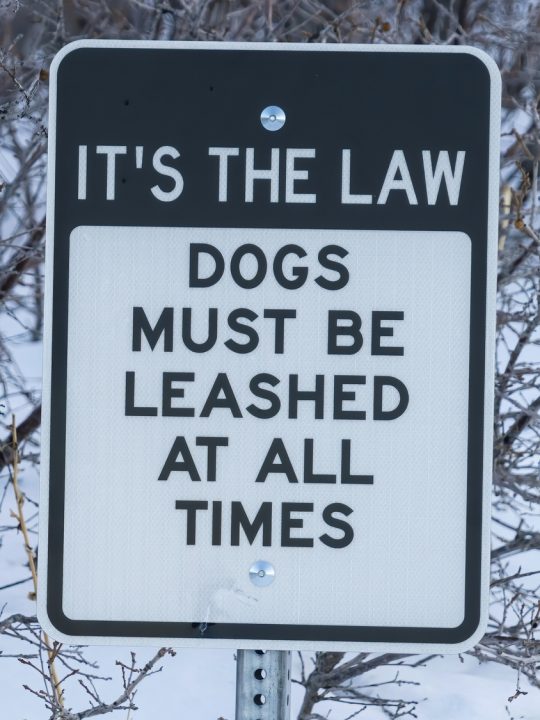 When I got home I thought about things I could have done differently.

I thought maybe I should have kept walking.

I had my Pet Corrector and Mace with me and I could have used it if necessary but then I thought no, I did the right thing by removing my dogs from a potentially unsafe encounter.

That’s my job as a responsible dog owner, to set my dogs up for success and not failure.

But now my dog walking anxiety has returned and I probably won’t walk Odin and Lou together by myself for a long time.

I’m too afraid that something bad will happen.

It’s Not Your Dog, It’s You

Dogs don’t give me anxiety, people do.

I have nothing against your dog because they are in fact a dog.

You, however, should do better.

If you’re 100% certain that your dog won’t do anything incorrect, you are wrong and that makes you the problem.

Dogs are animals and they react instinctively, no matter how well that they’re trained.

You can not guarantee that your dog will disregard their first instinct and if you do, you are putting MY dogs at risk and I don’t take that lightly. 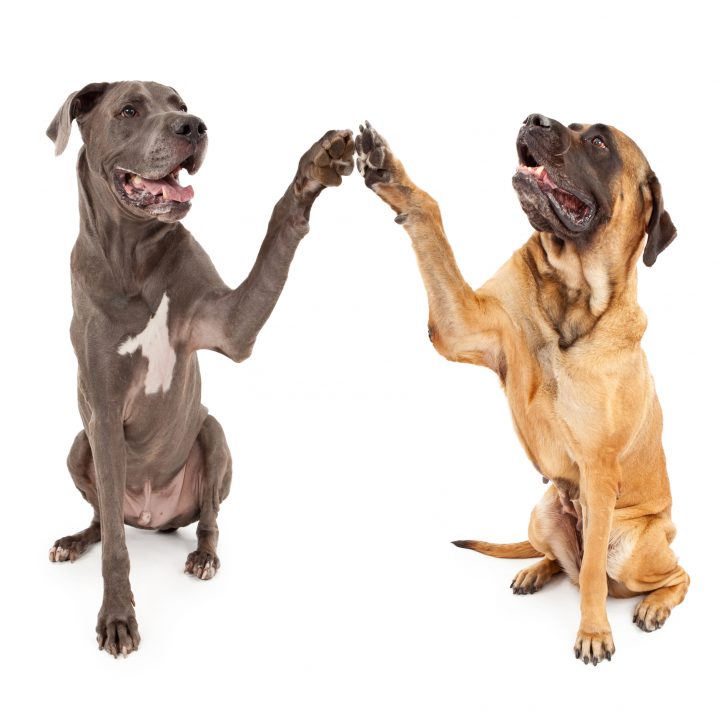 My Big Dogs Are Strong

I get that you think that your 80-pound dog is strong and I’m sure they are which might be why it’s easier for you to have them off-leash.

However, I’ve spent many hours teaching my big dogs to walk correctly on a leash because I know that they could pull me down.

In fact, I have been pulled down before which is why I have anxiety about being pulled down again.

Newfoundlands are strong enough to pull in lifeboats filled with people so pulling one person on a leash is nothing for them.

They, of course, won’t mean to do it but when your exuberant dog comes running towards them, they are probably going to try and run in the opposite direction.

This is why my big dogs wear escape-proof walking harnesses so that they won’t slip out and get away from me when they’re trying to get away from your dog.

When I saw your off-leash dog, I’ve already had 50 different scenarios play out in my head and none of them ended well. 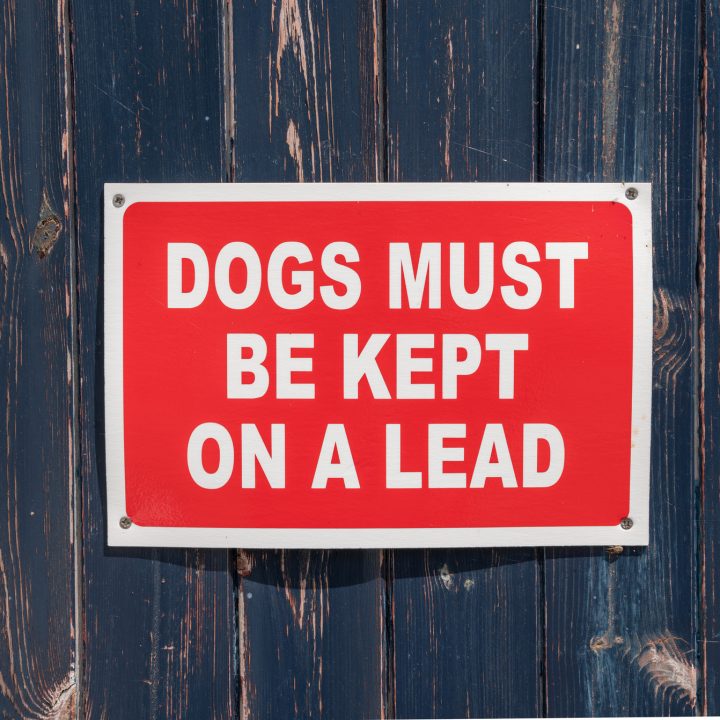 Big Dogs Get Anxiety Too

Not only do people suffer from anxiety when they or their dog are attacked, but dogs do too.

Newfies are big-ass sensitive dogs and they take things personally.

Your lack of respect for other dogs just broke my dog and now he’s terrified to go for a walk.

It’s going to take months, maybe even years to get his confidence back but you go ahead and keep living your care-free life.

I can’t speak for other big dog breeds but Newfies love their family and while they are not aggressive they are protective.

If you see a Newfie, don’t just assume that it’s a sloth taking a stroll.

We train our dogs to walk nicely beside us, on a leash.

You’d be surprised how fast a Newfie can be when it wants to and while they are most known for saving the life of someone in distress in the water, they will put themselves in harm’s way to protect their owner. 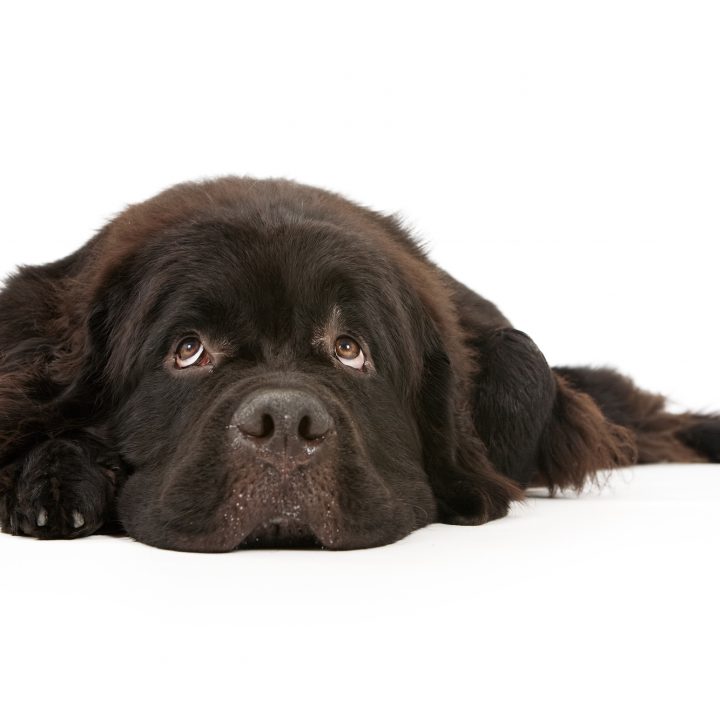 I don’t care how friendly your off-leash dog is, they are always a threat to me and my dogs.

Big dogs are always blamed if someone gets hurt no matter who started it.

It’s the reason why there are separate areas for big dogs at dog parks and at doggie daycare.

It’s the reason why we can’t spend the night in a hotel with our big dogs-because your small dog does all the damage.

It seems to be o.k., even laughed at sometimes when a small dog tries to attack a big dog but do you know what owners of big dogs are thinking?

Get your dog away from my dog before it gets hurt.

I’m not even talking about getting hurt by a bite but since I brought it up; a Newfie isn’t going to bite to kill but their bite is huge and powerful.

They could do a lot of damage.

Their paws are huge and powerful too.

A paw to the face, a paw to the head is going to hurt your 5-pound dog.

Do you know what Lou does to Finn when he’s biting his ankles?

He sits on him.

Sure Finn wiggles his way out but your dog might get sucked up into his asshole.

And what about those big dogs that drool?

I mean, we are in the middle of a pandemic so do you want your dog exposed to the spit of another dog?

(I’m being sarcastic-but you get my drift).

And speaking of the pandemic, if your dog gets hurt by my big dog, are you going to be able to get into the emergency vet?

Most vets are turning emergencies away because they’re understaffed and overbooked which is why I’m trying to be a responsible dog owner and lighten their load.

If not for your dog’s safety, for mine.

I feel your anxiety. I am a small human with a large 6.5 yr old female Newfie. We’ve worked very hard to train her so leash walking is fun and easy. She’s good at it. Seems once weekly I am confronted with an off-leash dog (usually small) running at us barking. My hackles go up, luckily not my Newfie’s, unless the dog lingers and doesn’t leave her alone or worse, nips at her. Off-leash dogs in inappropriate areas are an accident waiting to happen. There’s a time and a place to let your dog off leash- unless designated off-leash area- keep them leashed up. My large dog is scared of small barking aggressive dogs. And it’s not cute or funny. It’s dangerous.