If you’ve made the decision to trim your dog’s nails at home but you’re a little nervous to do it for the first time, don’t worry, we’ve got some simple tips that can make trimming your dog’s nail from home easier on the both of you.

A good rule of thumb for knowing when a dog needs its nails trimmed is when you hear them hitting the floor.

Long nails can do more harm than good like getting snagged on the carpet, collecting snow and debris and it can even affect the joints in your dog’s paws and legs because it alters the way that they walk.

Long nails can also cause a dog to slip on floors and ice because they can’t get the traction that they need.

You can do this!
You just need a little bit of time, patience, a few nail trimming supplies and some good dog treats to help you along the way!

Make Nail Trimming a Positive Experience For Your Dog

First, we want to make sure that trimming your dog’s nails at home is a positive experience for them.

This is a step that is often overlooked by many people but it’s one of the most important parts of trimming dog nails.

Let’s keep in mind that if you normally take your dog to a groomer to have their nails trimmed or if the vet does it, this is a totally different experience for your dog.

They are in an unfamiliar setting so their reaction will be different than if they’re having their nails trimmed at home.

We want your dog to be used to having their paws touched in their own home so start playing or touching their paws as soon as you can and reward them each time that they let you do it. 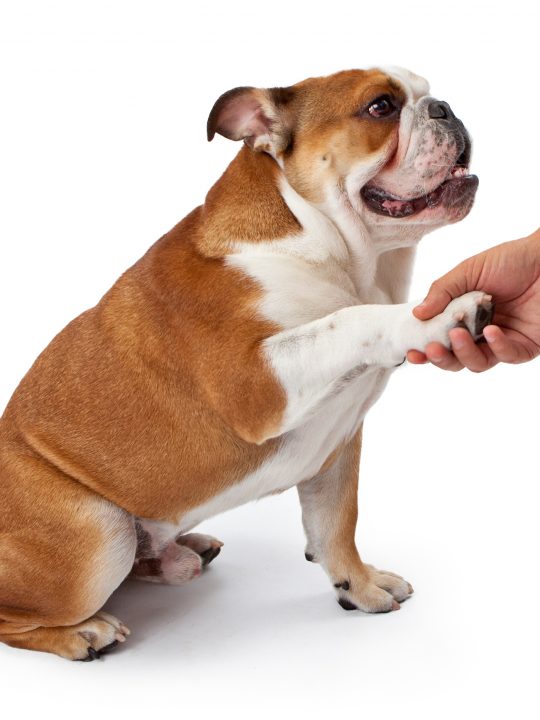 Next, you’ll introduce the nail clippers to your dog.

You’re not going to actually trim the nails but just show your dog the trimmers and reward.

Next, you’ll touch the nail clippers to their paws and reward them.

For instance, you don’t want to invade their nap time by trimming their nails in their dog bed.

You’ll also want to make sure that the flooring isn’t slippery.

These steps should be done over several days or weeks, not on the same day you plan to trim your dog’s nails.

When you start trimming his nails for the first time, do it slowly. 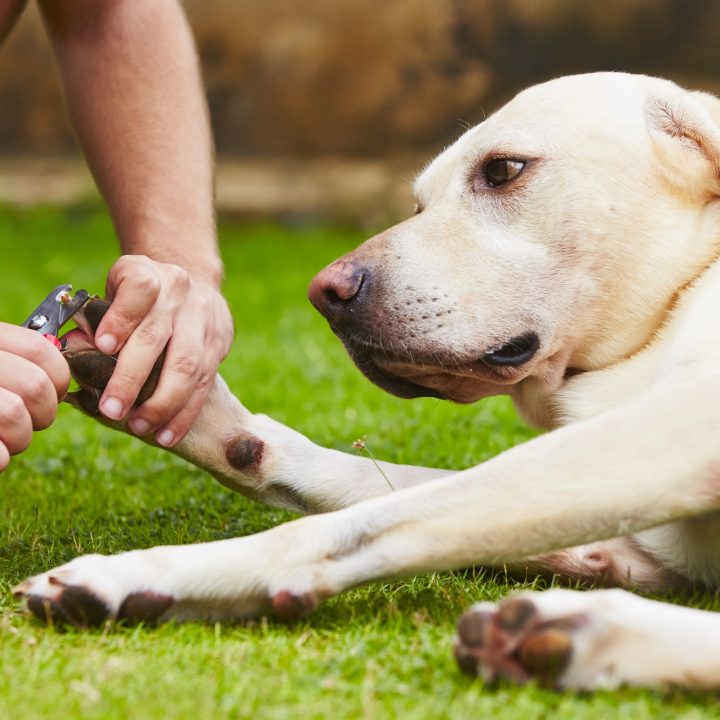 Trim just one nail a day, barely cutting off the end.

Your goal is to get all nails even with the corresponding paw pad and then keep them that way with regular trims.

Trim every two weeks to maintain the optimal nail length.

The more you trim overgrown nails, the more the blood vessels will retreat back into the claw.

A step that’s often overlooked when trimming dog nails is to actually take some time to prepare your dog’s paws.

If you have a dog that has long hair, you’ll want to make sure that the hair on the paws is neatly trimmed so that you can see their nails better.

If you’re trimming your dog’s nails after a bath, do it while their paws are wet. 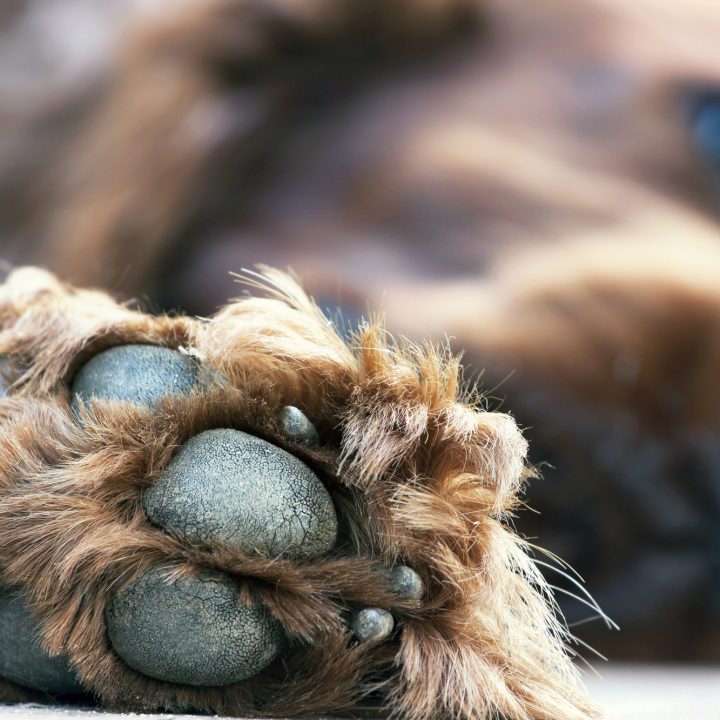 Wet nails are softer and easier to trim than dry nails and if you didn’t trim your dog’s hair, you can easily move it.

Also,  make sure to check for any cracked nails before you start trimming.

How to Trim Your Dog’s Nails With Clippers

Look for the Quick

The first thing that you want to do is locate your dog’s quick in their nail.

If your dog has dark nails, you will not be able to see the quick.

We have a really easy guide on how to identify the quick in a dog that has black nails right here.

I see so many people that recommend clipping a dog’s nail from the top of the paw.

STOP TRIMMING YOUR DOG’S NAILS FROM THE TOP.

As a former vet tech, we were always taught by the vet to trim from the bottom of a dog’s paw.

You can see the quick a lot better this way and it’s a more natural way for the dog’s leg to bend.

Keep in mind that the quick inside a dog’s nail curves so if you’re cutting from the top you’re not seeing the entire quick and this is where most owners end up cutting the quick and in turn, the nail bleeds.

So to get a better cut and less risk to cutting the quick, you should bend the paw so that you’re trimming underneath rather than on top.

You should also make the cut before the quick and not at the quick.

When you feel that you have a good grip on the paw and you’ve located the quick, it’s time to make the first cut.

You’ll want to cut from bottom to top and not side to side because that will cause the nail to crumble.

It’s best to trim the nails at a 45-degree angle and squeeze the handles of the clippers to cut the nail.

Praise and reward your dog for their cooperation.

If you accidentally do hit the quick and your dog’s nail starts to bleed, don’t worry, you can get it to stop in no time!

If your dog will stand for its nail trim, it will be faster and quicker.

When trimming the nail on the front paws, simply stand off to the side (parallel to your dog’s leg) and bend their paw gently backward and trim.

For back paws, stand behind your dog or over your dog.

And to end, since many dogs are sensitive to having their paws touched, you want to be touching their paws as much as you can be from a young age.

If the only time you touch your dog’s paws is to trim their nails, they aren’t going to respond well.