If you’ve accidentally cut your puppy’s nail a little too far and now it’s bleeding, don’t worry, here are some easy and fast ways to stop your puppy’s bleeding nail.

It’s time for your puppy’s first nail trim and you’ve decided to do it yourself!

Congratulations! Trimming your puppy’s nails is not only a big part of taking care of them but it’s also a great way for both of you to bond.

However, trimming your puppy’s nails can be intimidating especially if it’s your first time.

If you’ve landed here because you cut your puppy’s nails for the first time and now one is bleeding, it’s ok!

From using styptic powder to creating your own DIY solution, here are the easiest and fastest ways to stop your puppy’s nail from bleeding. 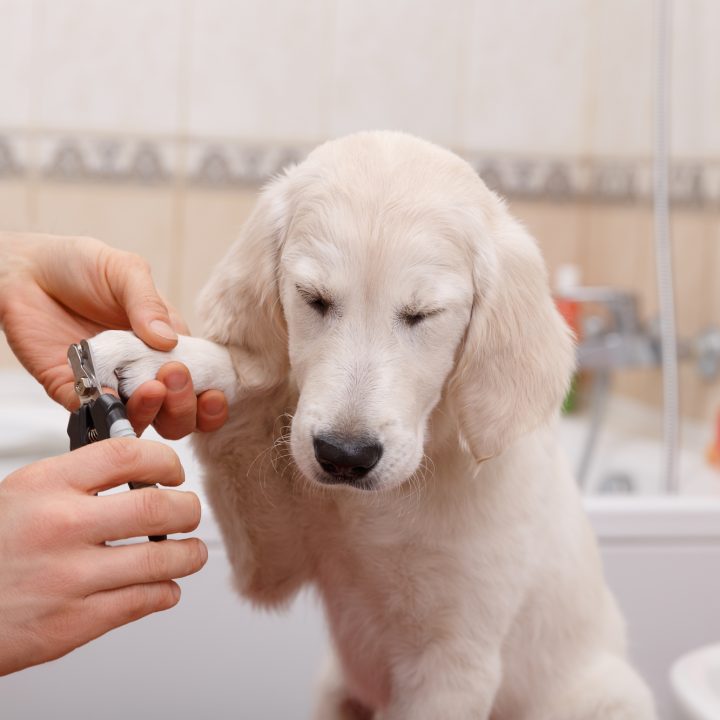 Stay Calm If Your Puppy’s Nail Is Bleeding

The first thing you need to remember after you cut your puppy’s nail too short is to remain calm.

If you’ve cut your puppy’s nail too far they will let you know instantly by pulling their paw away and letting out a loud cry.

Try your best not to panic when you see the first drop of blood.

Since the quick in dog’s nail is a blood vessel, the amount of blood coming from it will look worse than it is and the pain is normally gone in a few seconds.

Most nail trimming accidents are minor and can be treated at home with a little TLC and some clotting powder.

If you have another person available to help you out, that’s perfect because another set of hands can help hold and calm a squirmy puppy while you stop the nail from bleeding. 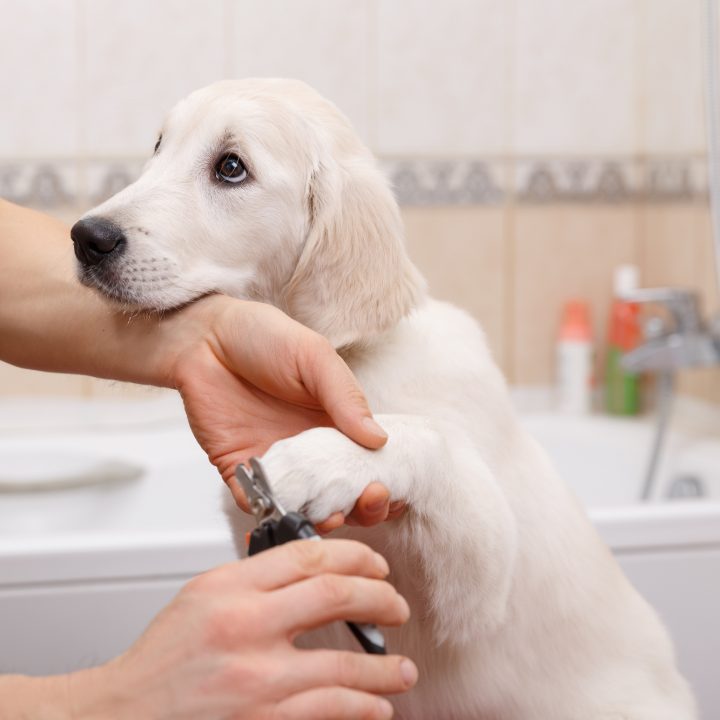 A clotting powder called styptic powder is the most common and fastest way to stop a dog’s nail from bleeding.

This is what veterinarians and groomers use to stop bleeding nails on dogs and puppies.

Styptic powder has a magical ingredient called Benzocaine which works as a topical anesthetic to help alleviate pain.

It also has another magical ingredient called Ferric Subsulfate which helps to stop bleeding.

These 2 ingredients together make it the easiest and fastest way to stop a puppy’s nail from bleeding.

The most popular brand of styptic powder is called Kwik Stop.

You can get Kwik Stop from most pet stores or you can order it online and it’s an important tool to have in your first puppy first aid kit.

They even sell Kwik Stop in convenient pre-soaked pads now! 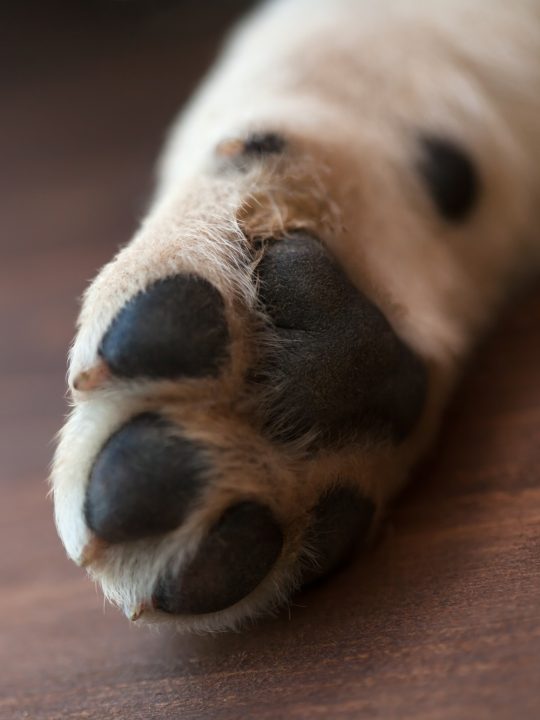 You can use styptic powder to stop a dog’s bleeding nail in a few ways.

First, apply gentle but firm pressure to the nail with a clean towel.

Styptic powder will usually stop a bleeding nail in under a minute.

If the bleeding doesn’t stop after about 60 seconds reapply the powder.

How to Use a Styptic Pencil to Stop a Bleeding Nail

Another way to stop a puppy’s bleeding nail is to use a styptic pencil.

You can usually get a styptic pencil at most pharmacies and they’re usually found in the shaving aisle.

The only downside to using a styptic pencil to stop a puppy’s bleeding nail is that they sting and they are messy.

If you opt to use it, keep in mind that it will stain your skin, carpet and anything it comes in contact with.

How to stop your puppy’s bleeding nail with a styptic pencil:

Styptic pencils are commonly available in most drug stores or pharmacies.

If you don’t have styptic powder or a styptic pencil on hand, don’t worry, there are a few things you can use that are in your kitchen cupboard to stop that nail from bleeding nail fast.

The above methods will work in a pinch but it may take a little longer.

You’ll have to apply moderate pressure for several minutes and make sure that your dog doesn’t lick it off. 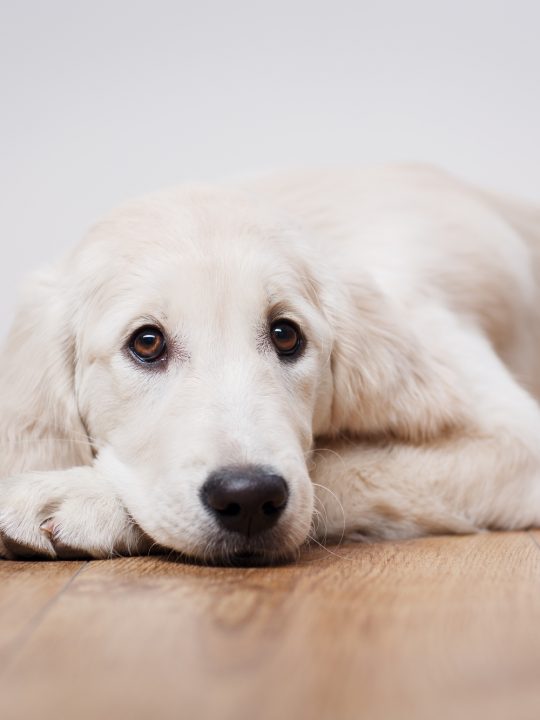 How to Use Flour, Baking Soda, or Cornstarch to Stop the Bleeding

One home remedy to stop your puppy’s nail from bleeding is to use flour, baking soda, or cornstarch.

How to stop your dogs nail from bleeding with baking soda, flour or cornstarch:

If you can’t dip the puppy’s bleeding nail into a bowl, you can grab a pinch of the flour, baking soda or cornstarch and apply it to their nail that way.

How to Use Soap to Stop a Nail From Bleeding

If all else fails and you don’t have flour, baking soda or cornstarch on hand, check to see if you have a bar of soap.

How to stop a puppy’s nail from bleeding with a bar of soap:

You can also break off a small part of the soap and dip your puppy’s nail into it.

An important step that is often overlooked is keeping your puppy from walking and running for at 30 minutes after the nail has stopped bleeding.

Keeping your puppy from running will ensure that the nail has had plenty of time to clot and that it won’t start bleeding again.

Most bleeding nails will stop bleeding after a few minutes with these home remedies and your puppy will be just fine and back to itself before you will be!

If for some reason your puppy’s nail does not stop bleeding after 20-30 minutes you should reach out to your veterinarian for guidance.

And finally, when you trim your puppy’s nails at home always make sure to have your dog nail trimming supplies close by! 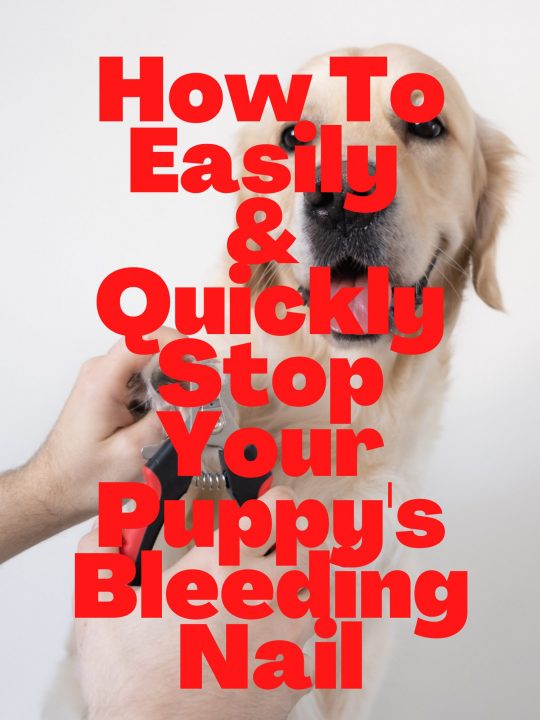