Signs and Symptoms Of Dog Bloat or GDV

Bloat is a serious condition that can happen to any dog but it is more commonly seen in large or giant breed dogs that have deep chests, such as the Great Dane, Newfoundland, Boxer, Great Pyrenees, Irish Wolfhound, Irish Setter and several other large, deep-chested breeds.

This life-threatening condition is usually seen in adult dogs over the age of 4, and some studies have suggested that male dogs are more at risk than female dogs of getting bloat.

Bloat is the combination of 2 conditions-gastric dilatation where the stomach fills with gas and fluid, and volvulus, which is where the gas-filled stomach twists (GDV).

Once the stomach twists, the blood supply to the stomach is cut off and the stomach begins to die which can lead to shock and death of the dog. 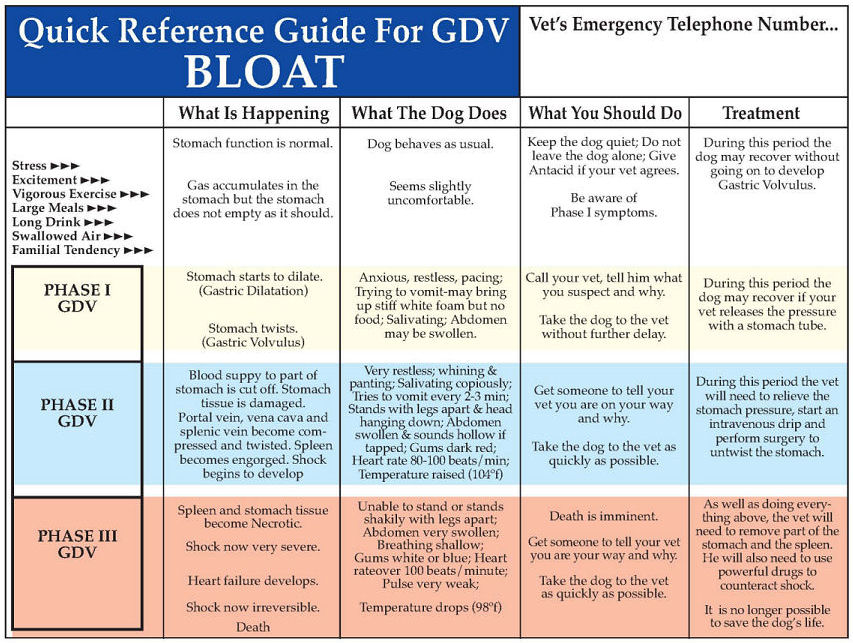 Veterinarian Dr. Jason Nicholas says, “Bloat/GDV can kill a dog within an hour if untreated.

This is why we vets can’t stress it enough:

If you notice that your dog is bloated, it is officially the time to get them to the nearest open veterinary hospital ASAP.”

Early Signs Of Bloat In Dogs

The first signs of dog bloat can vary from dog to dog but these are the most common symptoms reported:

How Quickly Does a Dog Bloat?

The timeline for a dog that is experiencing bloat moves pretty quickly.

In the first stages of bloat, gas begins to accumulate in the stomach, the dog begins to feel some discomfort.

Next, the stomach begins to dilate, and the dog becomes stressed. They may begin to pace and vomit up foam. Their stomach will usually be visibly enlarged.

In the last phase of GDV, the stomach twists, cutting off the blood supply to the stomach. The dog is normally in a lot of obvious pain, panting and drooling, shallow breathing, pale gums and the stomach when tapped on sounds hallow.

The dog will die shortly after this if emergency care is not already in progress.

Bloat can go from one stage to another within minutes.

Here’s a video of a dog experiencing bloat:

Why does canine bloat happen?

Genetics may increase a dog’s risk of GDV.

Some recent studies have suggested that dogs who suffer from IBD are at an increased risk for bloat.

There is no evidence that ice cubes cause dog bloat.

How can you prevent dog bloat in dogs?

That’s a great question and one that doesn’t seem to have a straight answer.

There seem to be several studies that contradict each other and I’m not a vet so the best advice I can give is to talk to your veterinarian about bloat and ask them about ways that you can try and prevent it.

A few things that I personally do to try and prevent it are:

Some people will tact (gastropexy) their dog’s stomach to prevent torsion.

Tacking a stomach does not prevent bloat but in most cases, it will stop the stomach from twisting.

There are also dog bloat kits that are available but most veterinarians do not recommend home treatment for bloat since most pet owners will not feel comfortable putting a tube down their dog’s throat and it can be dangerous for the dog and for the owner. 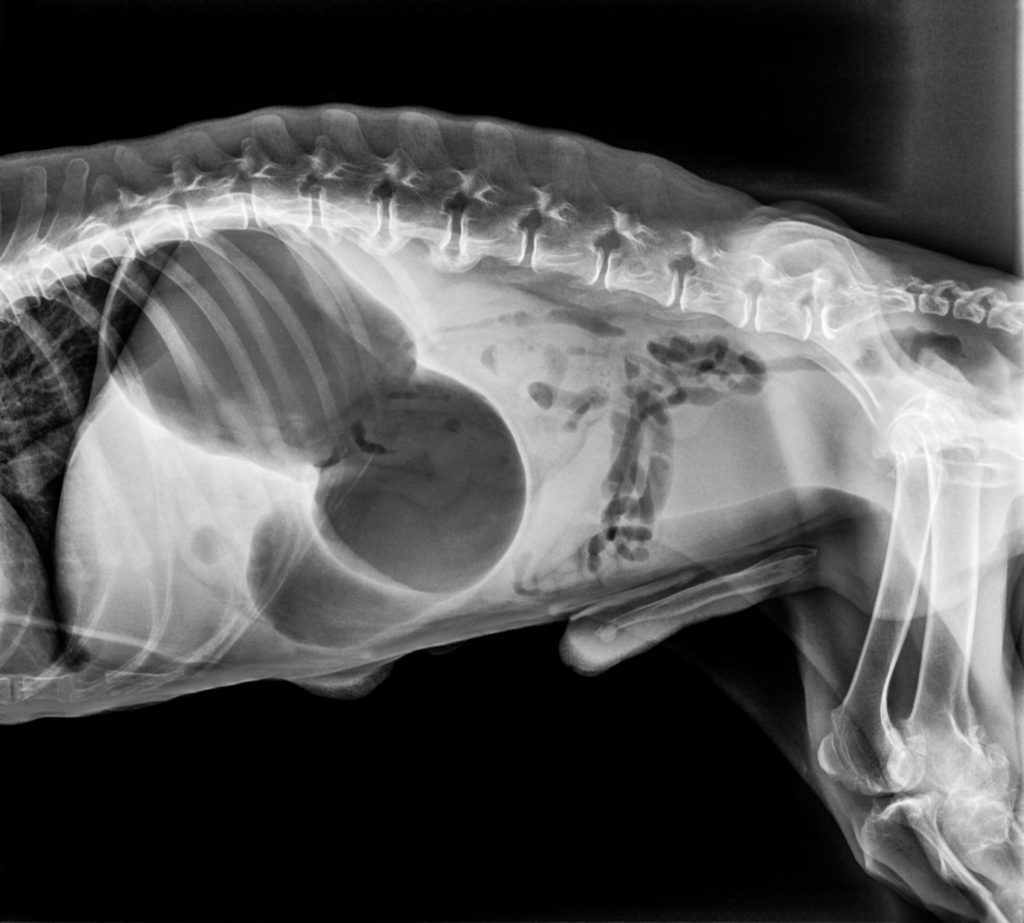 Above all, getting your dog to an emergency clinic as soon as possible is the best option.

Having a bloat chart available in your home is also a great idea.

“Owners of deep-chested breeds can elect to get their dog a gastropexy, or they can minimize the risk of bloat by limiting strenuous exercise after eating and drinking, slowing the rate of food consumption, and feeding frequent small portions rather than infrequent larger portions.” – OSU College of Veterinary Medicine

Can Bloat In Dogs Resolve Itself?

For true bloat/GDV in a dog, it will not resolve by itself and there are no home treatments.

A dog that is experiencing a gastric torsion needs to seek emergency care or it will not survive. 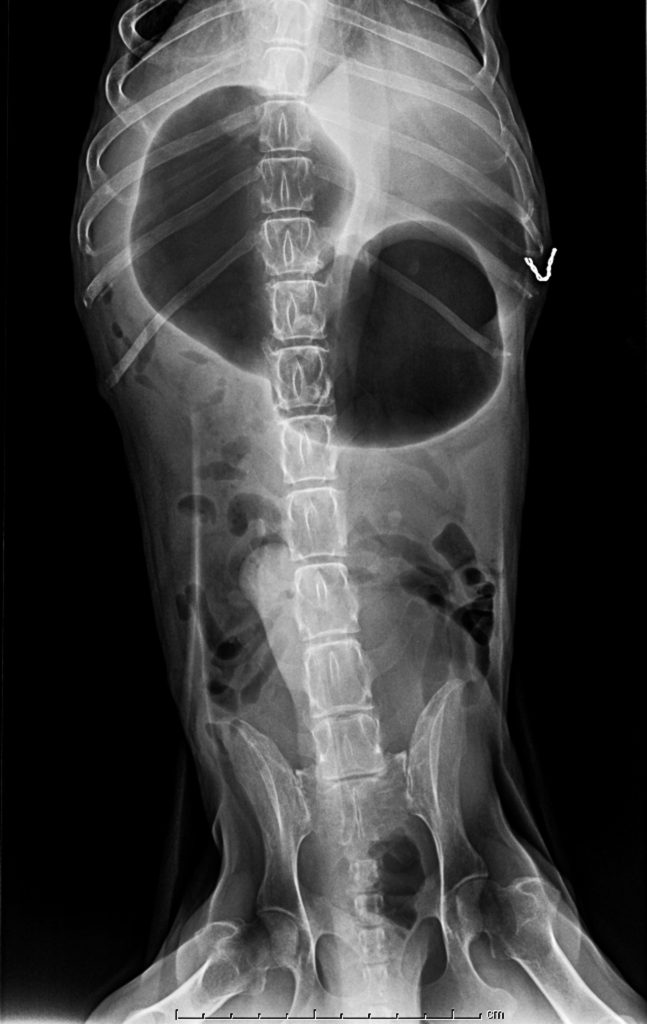 So how about you? Do you have a breed that is prone to bloat? Do you know the signs? Any tips you can share?

Bloat-The Mother Of All Emergencies

**On a side note I’ve discovered that the link to the official Purdue study is broken which is why there is not a direct link to it.

If you suspect that your dog is suffering from bloat it is best to seek treatment at the first signs of distress. Do not wait for symptoms to progress as bloat happens fast.

You can use the below area to monitor your dog's vitals.

831 shares
Trying To Catch A Dog's Urine Sample In The Snow Is Not Easy
← Previous
Why Buying Paper Towels In Bulk Is Important When You Have a Dog
Next →
Click here to cancel reply.

Glad it wasn't bloat, thanks for sharing your story. Hope he feels better now!!

Bloat scares the crap out of me and I was sure Lola was experiencing it on a number of sleepless nights... but alas, she was not... and as you said, there are some very key signs. I always worry about it though... So scary.

Whew - so glad Leroy was okay!

Poor Leroy! I'm so glad he is doing better Jen. We had a scare this past summer with Bea. Some of the same symptoms and off we went to emergency Vet services (a Sunday of course). She was filled with gas and they gave her something to get rid of it so we lucked out.

We have always fed our Newfies three times a day. They basically eat when we eat. They always have their big jug water dish so excessive drinking afterwards has not been a problem. They did like to go outside after dinner and run around but since they are both older now, that has diminished.

Bea has bone cancer (diagnosed in January). We switched to Raw feeding (cancer likes carbs) and this has helped out tremendously with their overall health issues including tummy troubles. It ain't cheap but she is still here with us so we hope it is buying her some time.

Vicki-I had no idea that Bea was diagnosed with bone cancer. I'm so sorry, but I'm glad to hear that she is doing well!

Thanks for the feedback on the raw, I've been thinking about that for quite some time....

That is a scary stuff! Yes, our guys are one of the breeds at risk. I hope that fate can safe me this type of scare, though.

It's always in the back of mind and I hope it never actually happens, for any dog!