Leroy continues to improve each day. We have a long way to go especially in the weight gain category but even though it gives me ulcers, it’s awesome to see him returning to his old mischievous self, especially when he stole a cooked pork bone off the table the other day when it was left on the table for 0.02 seconds.

Luckily, he was just as shocked as we were that he had a ginormous pork bone in his mouth and the recovery of the bone was done quickly and without incident, except my Leroy ulcer grew a bit bigger. 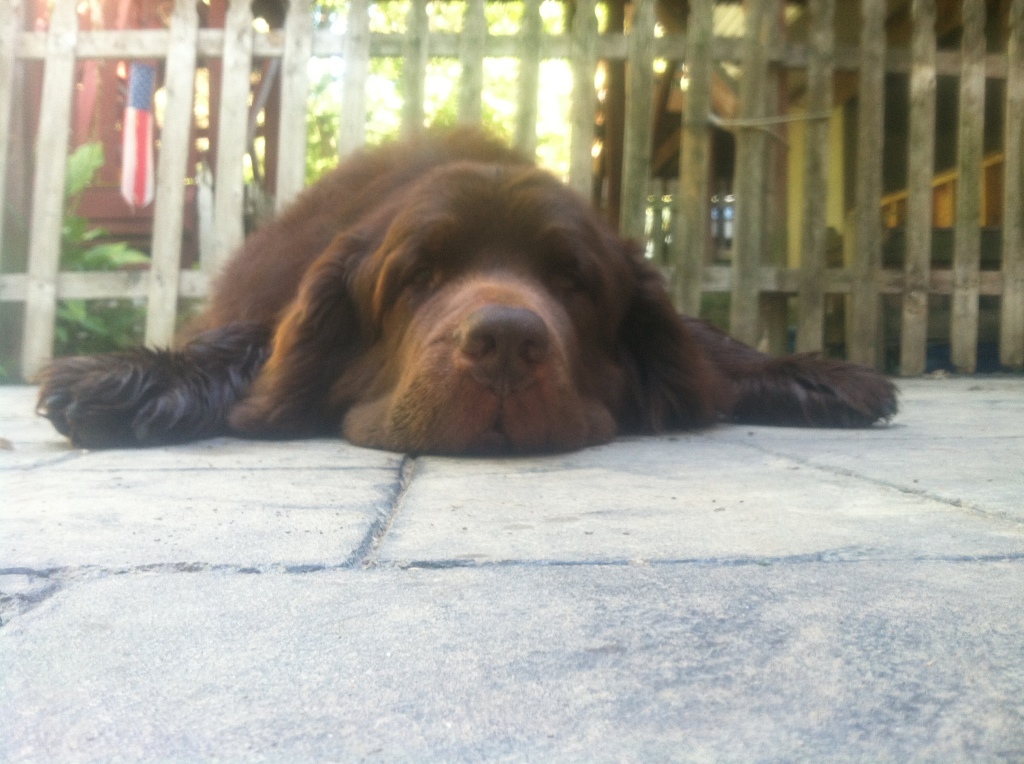 Besides being a an unsuccessful thief, Leroy’s illness has contributed to several small conditions over the past few weeks and one of those conditions is a bit delicate and a bit private because it involves his manly dog parts.

We like to refer to those manly parts as his chicken nuggets.

It’s a long story and one you had to be there for but in this house they are called chicken nuggets.

Anyway, Leroy has some issues with his nuggets.

I won’t go into great detail about it but his chicken nuggets are red, swollen and a bit ulcerated and they seem to be causing him discomfort so the issue needs to delicately be addressed.

Let me tell you, the easiest thing about this is noticing there is problem. The hardest thing is actually getting to the problem.

There’s no easy way to do it and Leroy most definitely does not want me investigating or applying medication to his nuggets and I don’t blame him, but I have to do what I have to do.

We’ve played ring around the rosy several times for several hours over the past week. I was able to get a little of the condition addressed but we had to stop because I got dizzy.

Then I tried to enlist an assistant but more wasn’t better in this case.

I get it but I still have to figure something out.

So next I tried putting a little nose cozy on Leroy. This was for my protection.

I had suffered a minor injury a few days prior dealing with the nuggets and I decided I would like to keep my arm and hand.

The nose cozy worked well and I was able to get the area addressed more than previous attempts but when I turned my back for one second Leroy ever so easily slipped the nose cozy off and glared at me.

So then I felt like a big pile of poop.

Since I was able to accomplish a lot by that point………………. the following days a new method arose.

Close your eyes and hope for the best.

Whenever the opportunity presented itself where I had a clear shot of his chicken nuggets, I would close my eyes and squirt the ointment.

I closed my eyes because I figured I would have a better shot of hitting the target.

The target being Leroy’s chicken nuggets.

And now we have chicken nuggets that are well on their way of being all healed up.

[…] of health problems involving their boy dogs and their *ahem* nether regions. Imagine trying to wrassle a newf to address his delicate “chicken nuggets”…if you catch my drift. *wink wink* Try not to laugh while you read Mrs. Taleteller explain […]

My cats sometime have problems with "crusties" (ew!) so I hold a cat while my husband helps clean them up - I know this is not enjoyable for anyone involved, so I feel your pain :)

Jen, I may never eat another chicken nugget again BOL. Happy to hear through all the pain and laughter that things are slowly turning around. Keep the stories coming!

Poor Leroy!! He's so lucky to have a great mama!