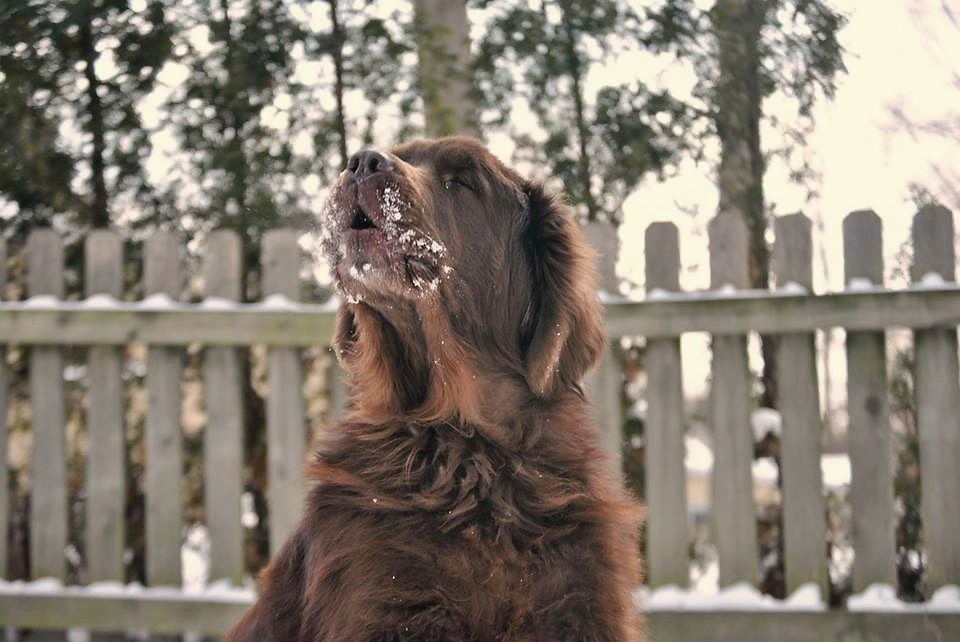 They are known for having a sweet and gentle temperament which hints that they are wonderful companions for children and adults.

Newfies are an amazing breed and one that is very close to my heart, however, there are can some behavior problems that new owners of the breed might not be aware of.

The first time that these problems popped up in my Newfoundlands, I was totally caught off guard.

Many of these behavior issues begin to appear during the adolescent stage and if not caught and corrected they can turn into big problems in adult Newfies. 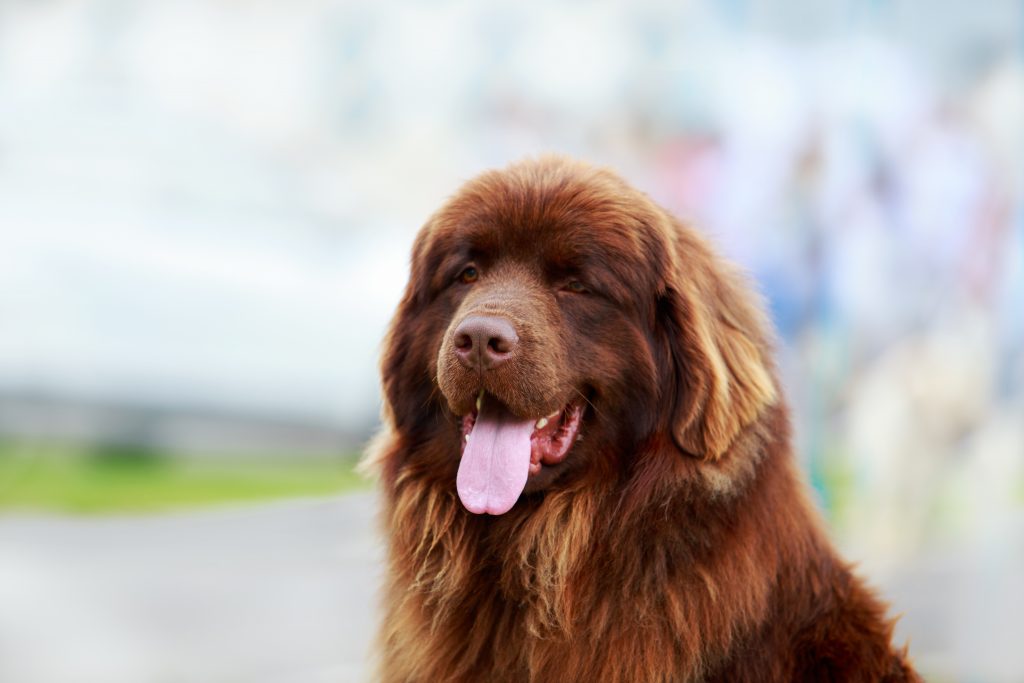 Some of the more common behavior issues that are seen in Newfoundlands are: 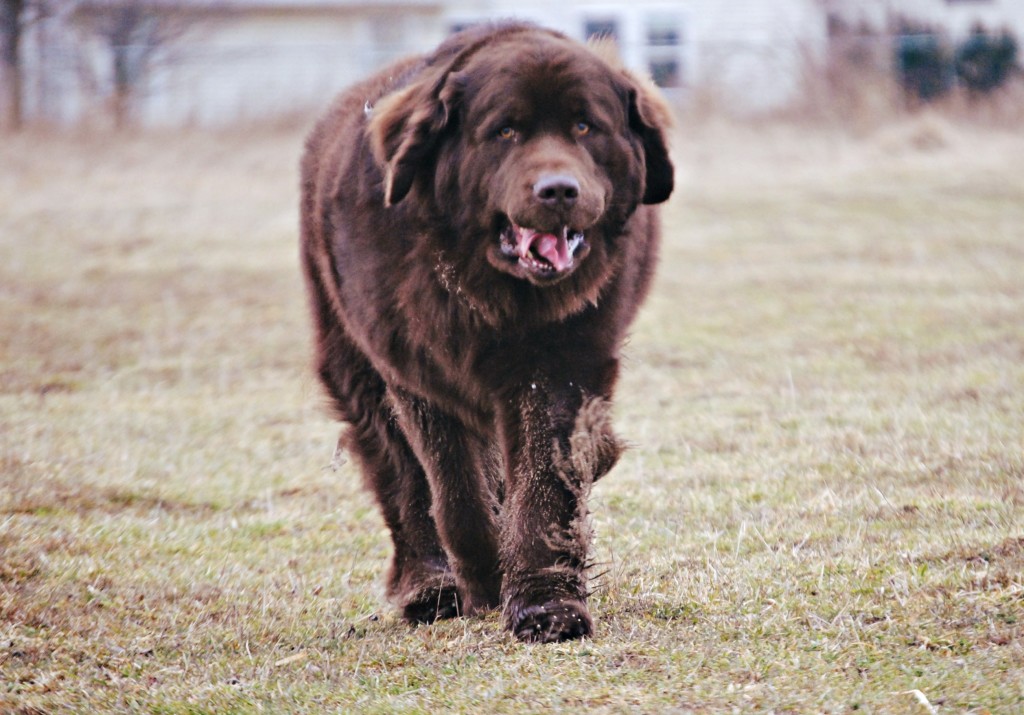 We’ll go over each of these behavior problems in a little bit but first, let’s talk about the obvious.

No dog is perfect and while many people make it a point to share how perfect their Newfie is, almost all of them have had to overcome some if not all of these problems at some point in time during their Newfie’s life.

A Newfie is a dog first, and a nanny, gentle giant, goofy newfy, best friend and lap dog, second.

This topic isn’t talked about enough in our community and I feel like it really should be.

I want every new owner of our breed to be set up for success and not failure.

We should want to share the entire Newf journey, not just the highlights.

Raising a Newfie is tough and it’s not for everyone.

We enjoy a lot of it, but not all of it but most of us will do it over and over again.

Jumping can be a frustrating behavior issue seen in Newfoundlands in their younger years.

It’s a behavior that should be addressed immediately and not taken lightly because someone, especially little children can get injured.

Leroy was our jumper. 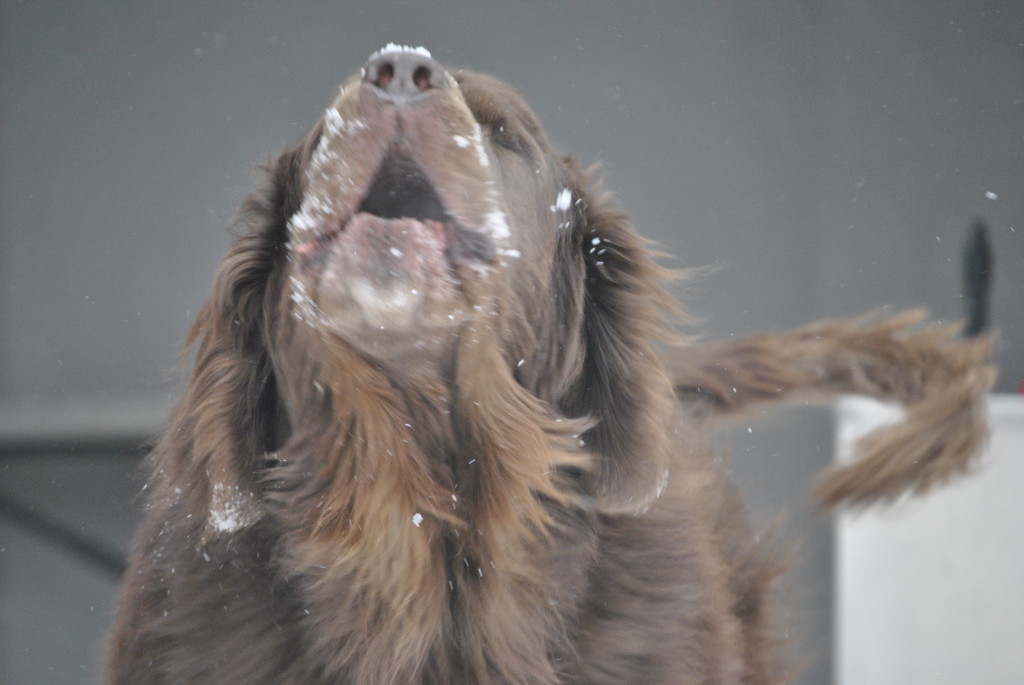 Newfies bark or they don’t.

Many things that you read online are going to tell you that barking is not a trait commonly seen in Newfoundlands and that is not correct.

Newfies are very capable of barking and are quite loud when they do it.

Many of them do it for a reason or for no reason at all.

Most Newfies bark because they are seeking attention.

They want something from you whether that be food, attention or their spot on the couch. 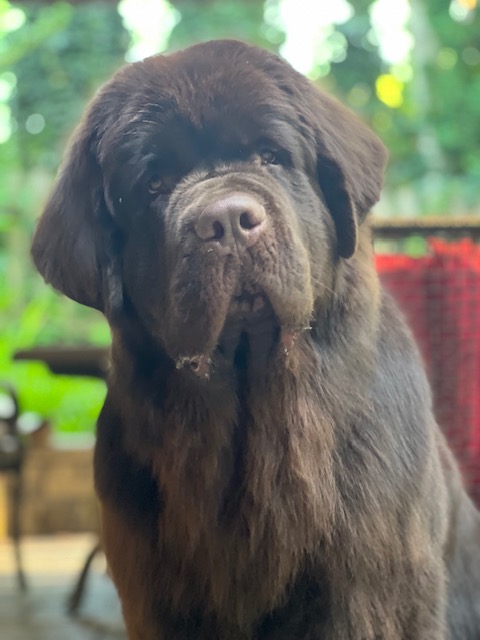 Don’t let his sweet adorable face fool you, right after this he barked and jumped on me:)

Lou is a barker. 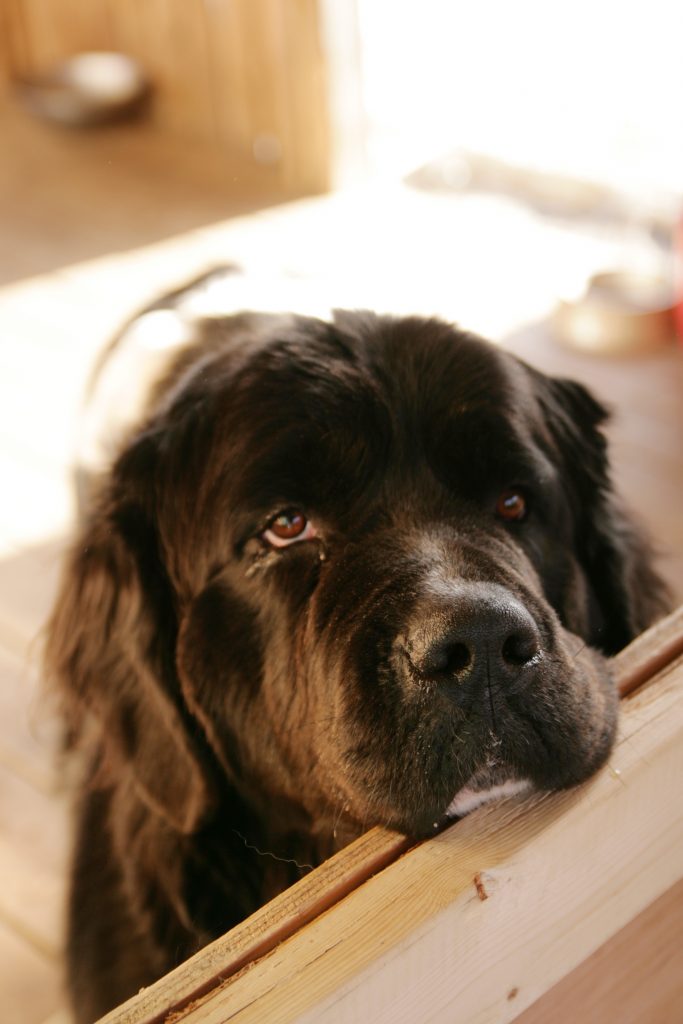 When a Newf places his paws up on a counter and gets whatever he wants that is up there.

Sometimes it’s butter and other times it’s a pot of chili.

Sherman counter-surfed once and grabbed a package of cookies.

Leroy counter-surfs but just with his head.

Lou is a counter-surfer.

We broke him of the habit by lining our kitchen counters with cookie sheets and we removed anything and everything in reach.

Newfies are working dogs and many of them have the instinct to pull.

However, they are supposed to pull a cart, not you.

Having a pulling Newfie can be very dangerous for the person on the other end of the leash and for the dog.

Not only can they pull you down if they wanted to, but the pressure of them pulling when using basic walking gear can injure their neck. 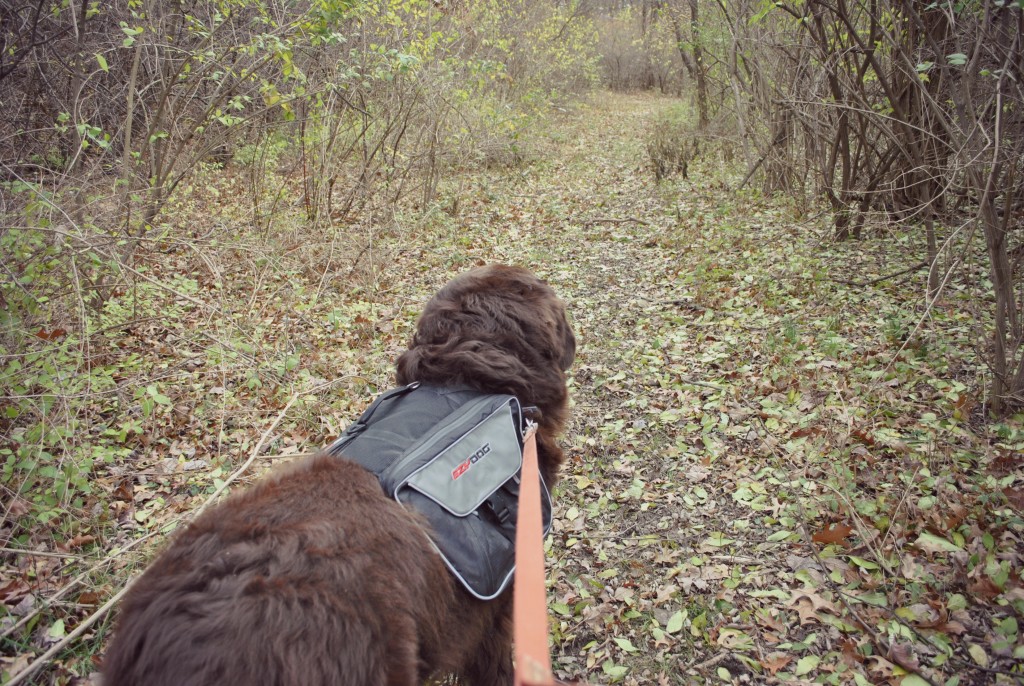 4 Reasons To Consider A Backpack For Your Big Dog

Whatever the reason is it can be a costly behavior and in some cases, it can lead to medical issues for the dog.

Leroy is a digger and getting him to stop wasn’t easy but we addressed his behavior and then curbed the digging.

Newfie’s are working dogs and are happiest when they are with their owners.

A Newfoundland who is left alone a lot and is not exercised both mentally a physically can suffer from separation anxiety and become destructive. 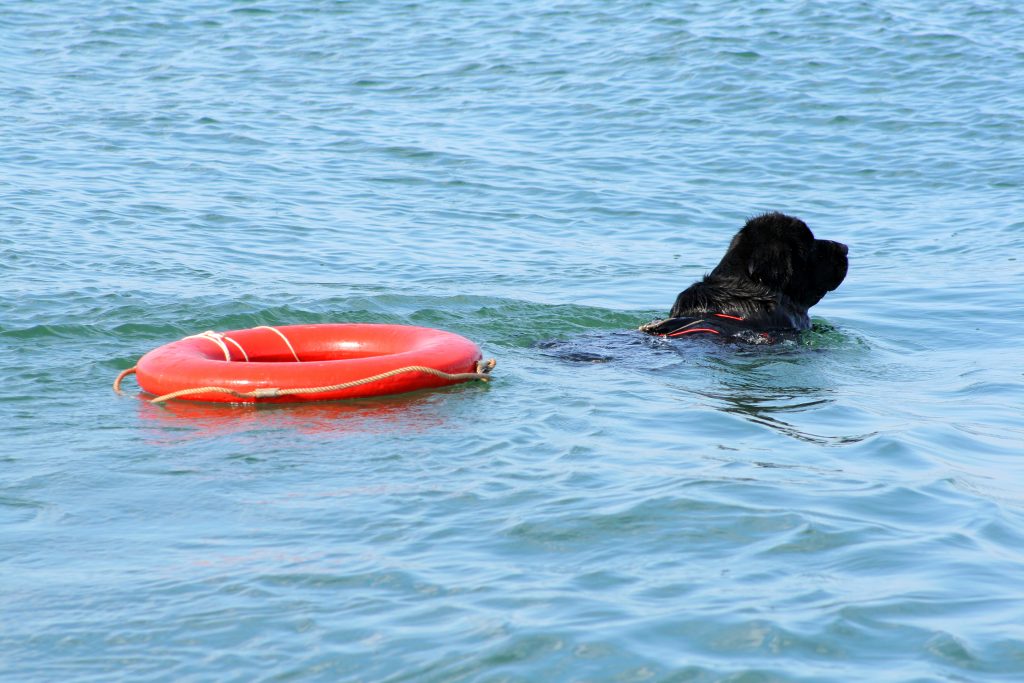 This can entail tearing up things around the house such as floors, baseboards, furniture, and anything else they can get their mouths on.

Sherman used to chew on our wooden kitchen chairs.

When they hear only what they want to hear.

I can hear you talking but you can’t come in.

Newfs can be stubborn but if they are constantly tuning you out then it might be something that you’re doing wrong.

Leroy has a severe case of selective hearing but Leroy also has a mind that goes a mile a minute.

He’s here and there and everywhere. 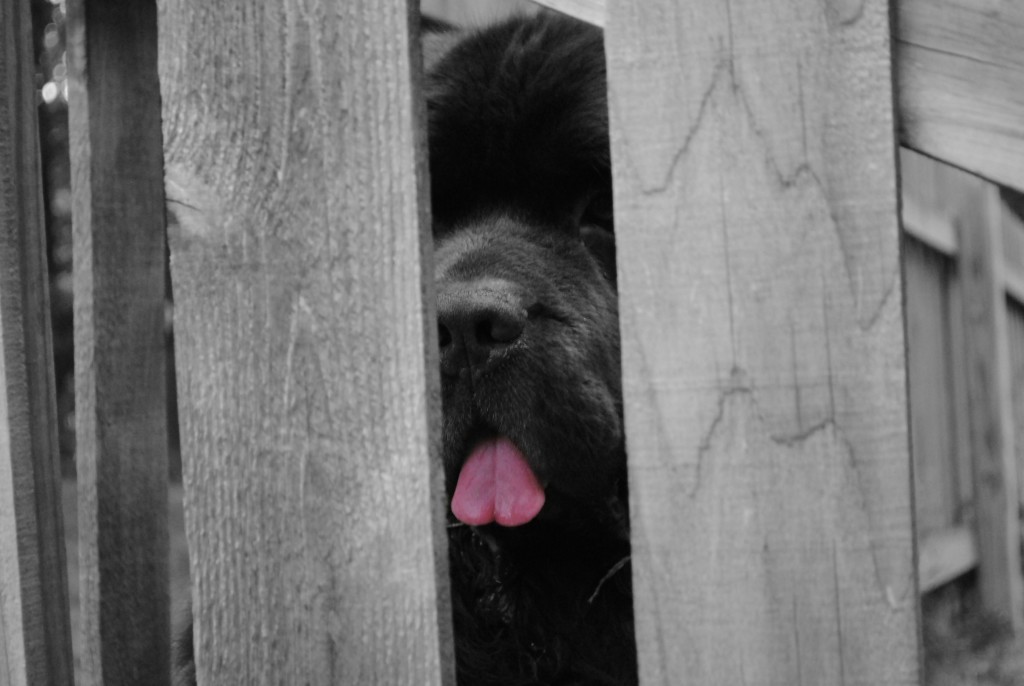 Resource guarding can happen in any breed and the Newfoundland is not an exception.

There can be a number of things that they guard including food, toys, treats, specific areas, other pets, and people.

Sherman used to resource guard me, food, and treats, and yes it caused problems. 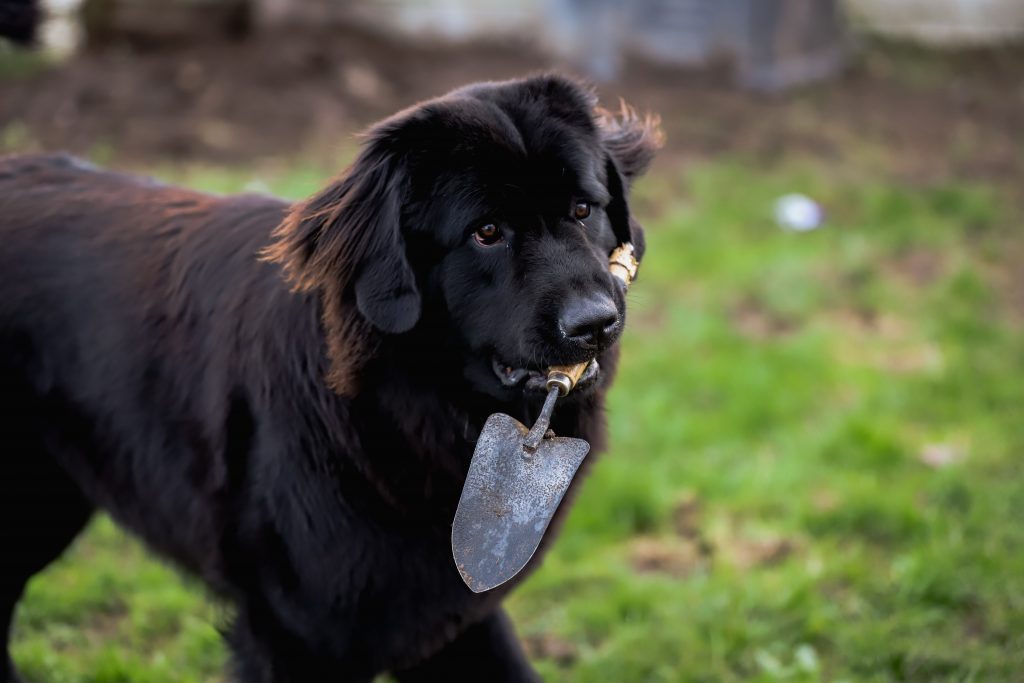 When you think of a Newfie the last thing most people think of is them chasing after a chicken or rodent and killing them but Newfies ARE dogs and some Newfies do have prey drive.

It’s a difficult behavior for many and sometimes cats are their prey.

Sherman has a small prey drive.

He’s caught a groundhog before, trapped a possum and isn’t allowed to have contact with our guinea pig.

He’s never actually killed anything that I know of so he doesn’t go through the whole prey drive sequence but I wouldn’t put it past him. 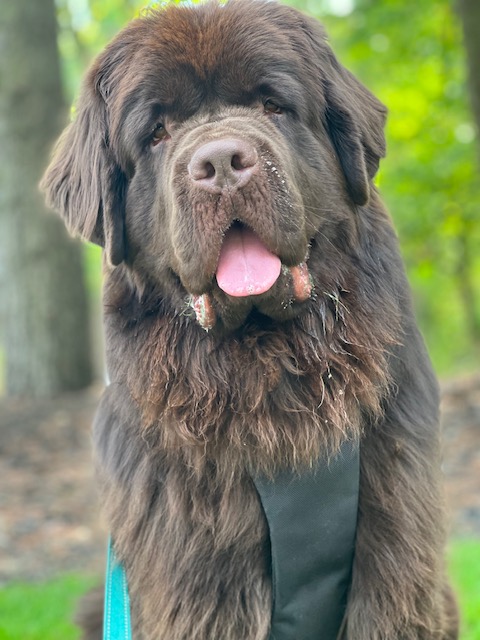 Odin had prey drive when we first adopted him but it’s mostly gone now.

I’m unsure about Lou at this time but he did make friends with a frog so I think he’s good.

I call this behavior love nibbles.

It’s when a Newf will put your arm in their mouth and nibble it on like a piece of corn. It doesn’t hurt but it can catch an unsuspecting person off guard.

I was once told that it is part instinct because when Newfies are rescuing someone from the water they grab them by the arm and pull them in.

I don’t know how much truth is to this. 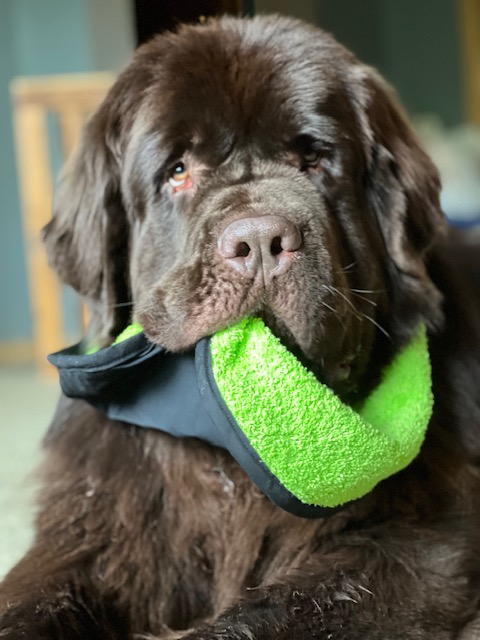 Sherman used to do this to me when he was excited, especially when I would come home from work.

He likes to have something in his mouth, especially when he’s excited.

I always try to have something handy for him to carry in his mouth because if I don’t, he’ll use my hand or forearm.

Dealing With Your Newfie’s Behavior Issues

Behavior issues in any breed of dog takes a lot of training, focus, dedication and consistency.

First, you should check out 10 Tips For Training Your Newfoundland and see if there’s anything that you can implement into your training sessions.

Next, if you can’t get these issues under control we highly encourage you to get in contact with a dog trainer in your area.

We recommend checking out the teachings of Ian Dunbar., The Newfoundland Puppy, early care and training by Judy Adler, (affiliate link)  for starters.

And maybe your Newfie is showing you that they’re bored. How To Tell If Your Newfoundland Dog Is Bored

Newfoundlands can be difficult if you don’t understand them.

They don’t respond well to harsh punishment or negative training.

They love their family and are happiest by their side.

Newfies also learn quickly and can get bored with repetitive training so it’s important to find a method that works well for your dog and stick with it.

Teenage Newfies are the most difficult and need the most guidance.

They haven’t pulled on walks in years and I found a way to keep them from digging most of the time.

The selective hearing still presents itself at times but I get it.

So you’re not alone. 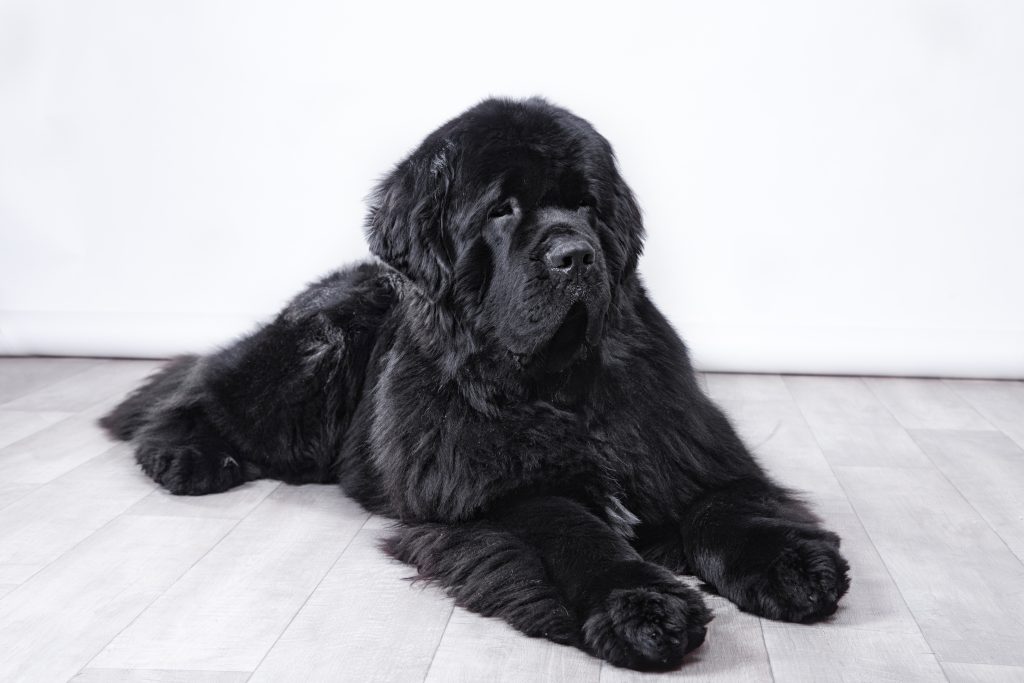 Thousands of other Newfie owners have gone through it and made it.

Not every second of having your Newfoundland is going to be wonderful.

There are going to be hard times with crying and frustrations and all of that is o.k.

There are also going to be great times, funny times and many proud moments and the hardest lesson that you are going to learn during this time is that your Newf will make mistakes and so will you. 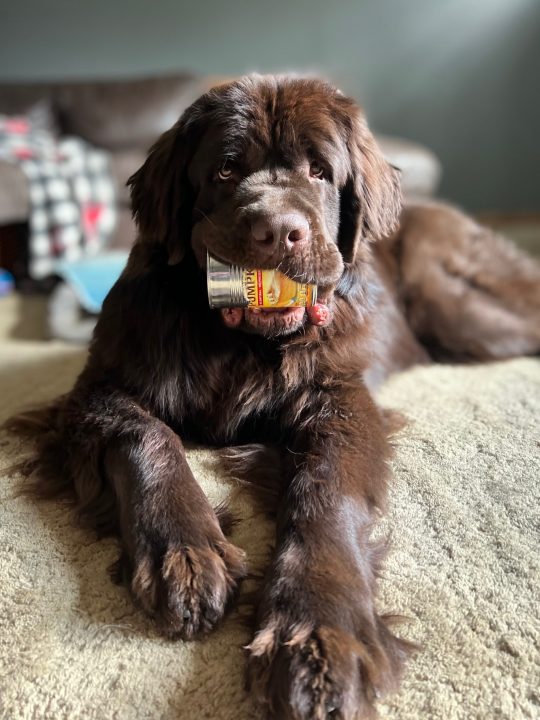 I’m raising another Newfie puppy right now and I definitely refer back to this post from time to time to reassure myself that this is just a phase.

Remember, a Newfie is a dog first and a Newfie second.

The first year of raising a Newfie can be tough, the second might be even tougher, but by the third year, you’ll see it all come together!

p.s. I realize that there may be some that believe that they have a perfect Newfie with no behavior issues, I’m happy for you.

p.p.s. Of course, it’s worth it and of course, I wouldn’t change anything.

Well……I would go back and put the stuffing bread in a safer place. 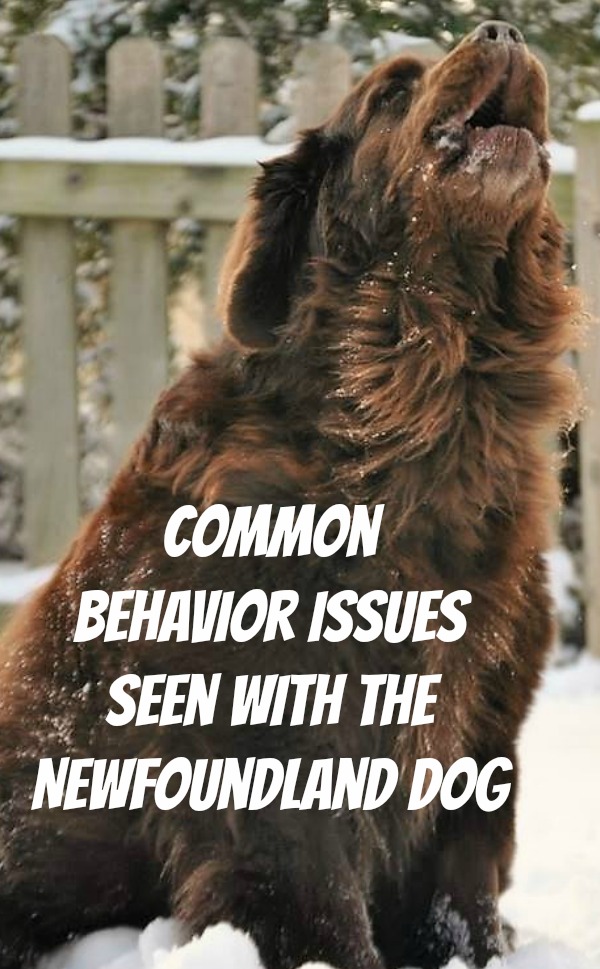 Newfies are for owners who are there for their dogs 24/7. If you only intend to be with your newfie at weekends and leave them alone during the week, then they are not the dog for you.

Being from Newfoundland myself, I smiled at everything you wrote.

I have 2 Newfoundlands and a St Bernard, my conclusion is that all giant breed dogs act similar, it is just a pup growing up. They are big and boisterous, clumsy and most of the time very naughty, but with patience and diligence like with any puppy they are 2 of the best breeds that I love and as they get older yes they turn into my lovable giant teddy bears. once they turn 3 they are very settled and sometimes very boring and you will miss their silly behavior.

I have a nearly 6 year old newfie to be fare he is good lad. However, he chews one leg (really bad) behavioural not medical, so when unsupervised has to be coned, is never alone accept for food shopping. Walks 6 miles a day over 2 walks. He harasses anyone e that comes in house, is very rude and invasive, shoving his nose in places where it does not belong, will whine and push when trying to stop him, will launch at people, have to lead him around people at home. Has been to obedience classes. Will growl when you tell him to move and he doesn't want to. Has now taken to peeing like a girl, sometime peeing where he lays (not medical) had him checked at vets, he's just lazy and this is on an evening, he refuses to go oee outside late on, would rather do it where he is, not often, once every few weeks.

Our life revolves and is controlled by him.

We've considered removing him, but won't, we are constantly working with him. We've found the more in control he is, the worse he gets so we make him work for everything, including a fuss.

Just a few not so pleasant traits, ps I am the only person he listens to literally. He has growled at everyone in house, including kids baring teeth, so not a grumble, they just asked him to move. As we will not step over him, as he ruptured my ankle doing this, he decided to stand up at the moment I was over him.

Ant advice o these issues would be grateful.

Have you reached out to a trainer or dog behaviorist in your area?

For the chewing, have you tried giving him some puzzle toys or something like a frozen stuffed Kong to help with boredom or to satisfy his licking needs? You could also try a lick mat.