Out of over 342 dog breeds known throughout the world, Newfoundlands are one of the most amazing and loyal breeds to be owned by.

As a Newfoundland owner, I get to see the expression on many faces when they first meet one of my boys.

They are certainly a sight to see and not everyone we meet is familiar with just how awesome the Newfoundland dog really is.

Newfoundlands are an amazing breed with an even more amazing history so read on to learn more!

The Newfoundland is a large, strong, devoted dog from the working class.

He is a multipurpose dog that is capable of heavy work both on land and in the water.

Not only is Newfoundland known for rescuing people from the water but they are also capable of pulling in small boats.

2. The Newfie Is a Working Breed and They Are Strong

Newfoundlands are considered a giant breed with male Newfies weighing between 130 pounds to 150 pounds.

With their sounds structure and big body, they can take on tasks such as pulling nets for fishermen, carrying boat lines to shore, and hauling wood in carts from the forest.

Due to their waterproof and double coat, Newfs are the only breed that is designed to swim all year round, even during the winter. 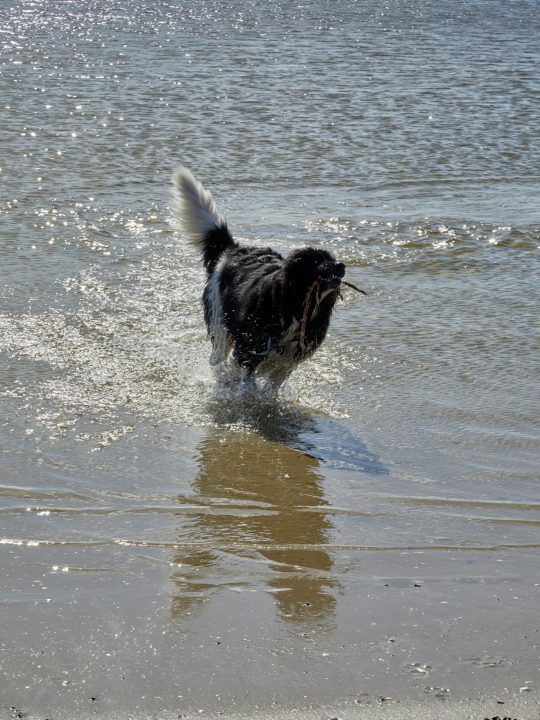 3. The Newfoundland Has A Unique Swimming Style

The Newfoundland is a strong swimmer and has webbed feet.

Instead of doing a normal doggie paddle like most dogs, Newfoundlands do more of a breaststroke which gives him more power and drive in the water.

4. Newfies Save And Protect People

Not only are Newfoundlands known for protecting their family but they also protect and rescue people and children that they have never met, from the water when they are struggling or, way back in the day, saving people following a shipwreck.

5. Newfs Are Natural Lifeguards In The Water

Believe or not the Newfie has its own techniques when it comes to pulling people to shore.

If the person is responsive the dog allows the person to grab onto them and be towed to safety.

If a swimmer is not responsive, the dog instinctively grips the person by the arm so that the body rolls on its back and the head is out of the water.

6. A Newfie Saved Napoleon From Drowning

Some reports even suggest that a Newfie saved Napoleon!

A fisherman’s Newfoundland allegedly jumped in after Napoleon and kept him afloat in the choppy waters.

Not only can the Newfie excel in the water he can equally excel on land by pulling carts with heavy loads, being assistance dogs, therapy dogs and they are also used in search and rescue. 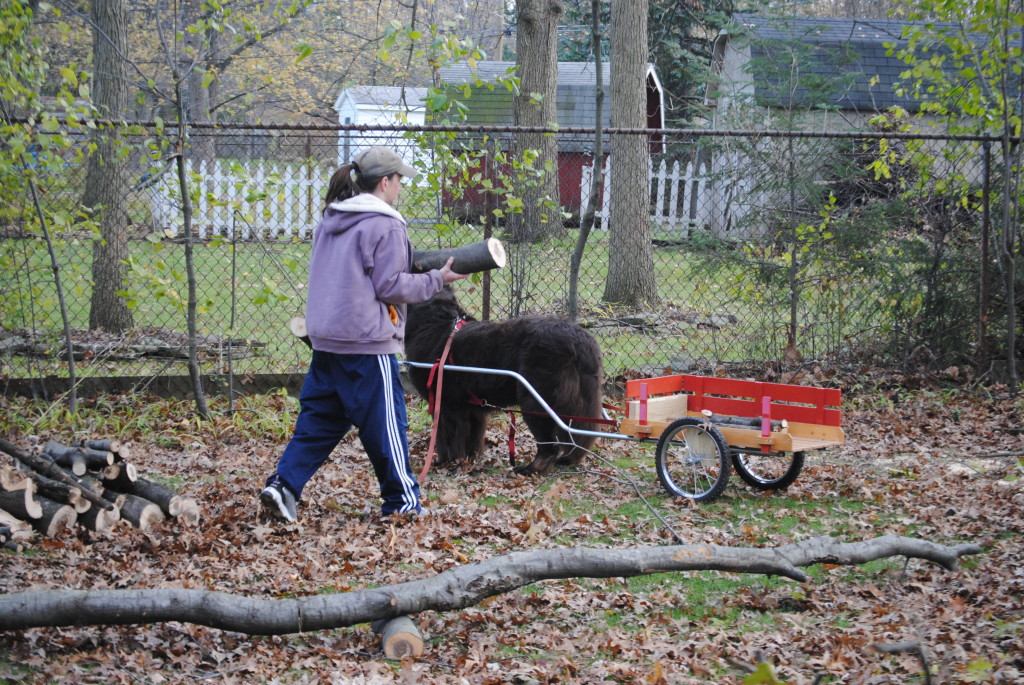 In the early 20th century, a dog that is thought to have been a Newfoundland saved 92 people who were on the SS Ethie which was wrecked off of the Northern Peninsula of Newfoundland during a blizzard.

9. Newfoundlands Served In The Civil War

Several Newfoundland dogs served in the Civil War I and World War II along with soldiers.

Sable Chief was the famous mascot of the 2nd Battalion of the Newfoundland Regiment in World War I.

Not only did he keep in step when marching, but it is said that he would invariably stand up with the opening bars of the National Anthem and remain at attention until its conclusion.”

“A large dog called “Tony” was a beautiful Newfoundland Dog lovingly cared for by the Chicago Light Artillery Battery A.

He was called the “Battery dog”. Tony was a dog of action and gave no thought to the bullets zipping all around him.

He was on the battlefields at South Mountain and the wounded at Fort Donelson.

A Newfoundland’s temperament is kind and gentle. They are devoted to their families and are often referred to as “nanny dog” due to their protective nature around children.

The dog in Peter Pan, Nana, was actually a Newfoundland. 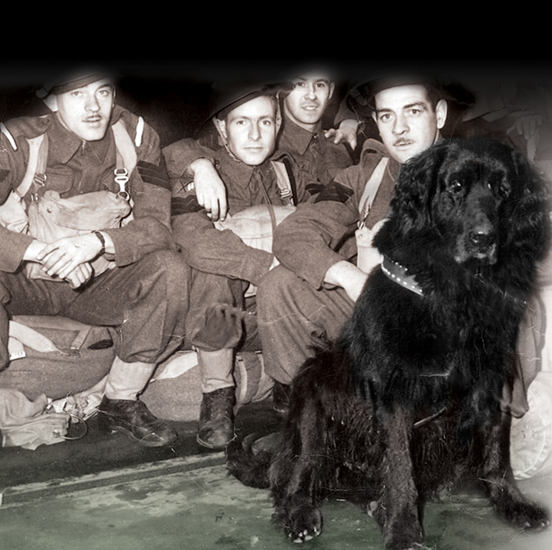 11. Newfies Are Devoted To Their Families

A famous Newfoundland named Gander was the mascot of Quebec City’s Royal Rifles of Canada.

His official name was Regimental Mascot Sgt. Gander. Gander and the Rifles covered many miles and ultimately ended at the battle of Lye Mun on Hong Kong Island.

During his time as their mascot, Gander proved his value more than once but his last heroic act would cost him his life.

A grenade was thrown towards a group of soldiers commanded by Captain Gavey.

The soldiers were unable to move away from the grenade due to intense shooting from the Japanese.

Gander ran forward, took the grenade in his mouth and continued away from his men.

Gander was killed by the explosion but the men he served were saved by their loyal Newfoundland mascot.

This last act of heroism has been memorialized for eternity by awarding Gander the Dickin Medal for “acts of conspicuous gallantry and devotion to duty in wartime.”

12. A Newfoundlands Coat Is Important

The oily nature of the Newfoundland’s double coat effectively keeps him from getting wet to the skin and combined with his webbed feet, deep, broad chest, and well-sprung ribs contribute to his swimming ability.

Despite this heavy coat, he adapts to warm as well as to cool climates. 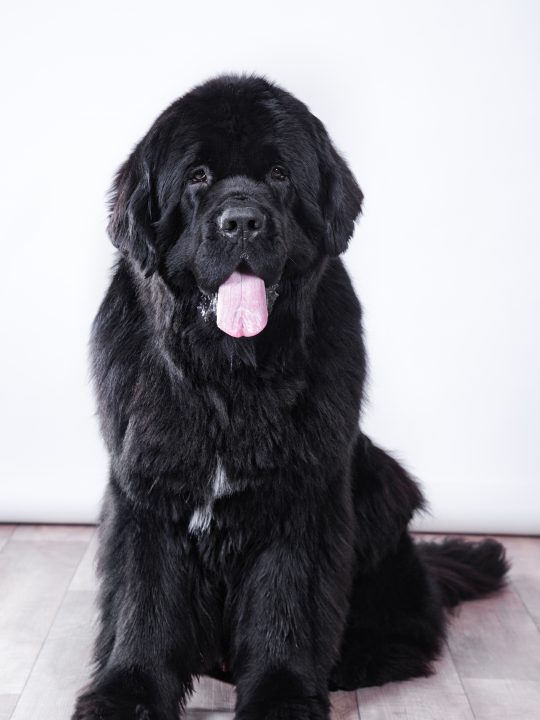 There are many conflicting stories as to the origin of Newfies.

It is said that he is one of the older breeds of dogs in existence today.

He may not have originated in Newfoundland, though skeletons of giant dogs have been discovered in Indian gravesites in Newfoundland dating from the 5th century, AD.

One of the more appealing speculations rests on the legend that when Leif Erikson arrived in North America about 1000 AD, a large black dog, resembling a Newfoundland, called Oolum, was aboard his boat. 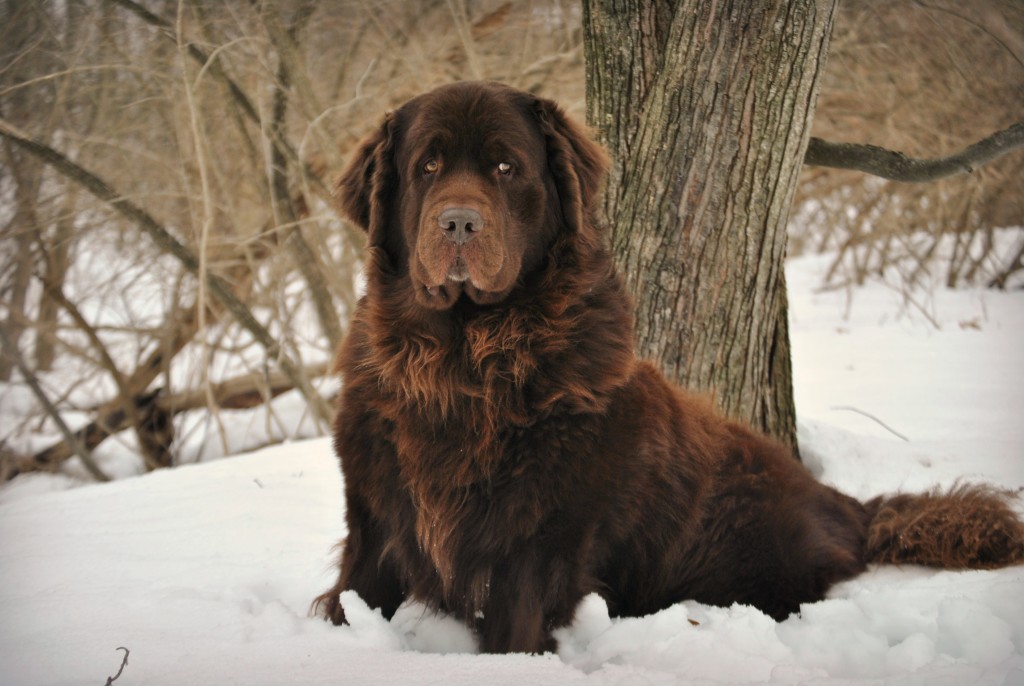 The Newfoundland breed as we know it today was developed largely in 19th century England and America.

15. Newfies Come In Colors Other Than Black

The recognized colors of the Newfoundland are black, brown, grey, and white and black (Landseer). 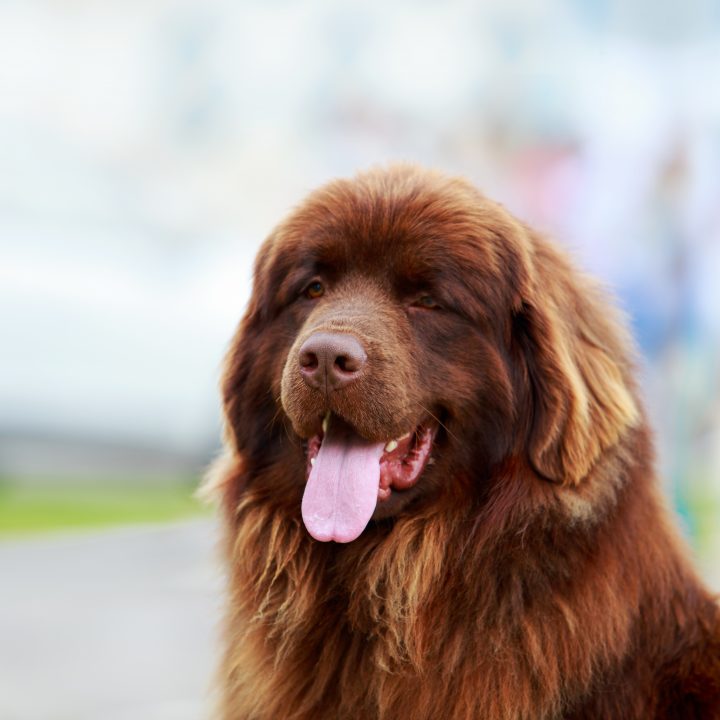 16. Newfies Are An Important Part Of History

A Newfoundland named Seaman accompanied Lewis and Clark on their expedition.

September 11, 1803  “my dog was of the Newfoundland breed very active strong and docile, he would take the squirrel in the water kill them and swimming bring them in his mouth to the boat”

17. The Newfoundland Has Been Registered For 141 Years

The breed was first registered with the American Kennel Club in 1879 and the first American Newfoundland champion was titled in 1883.

18. Newfies Are Known As a Gentle Giant

The Newfoundland is a giant breed dog.

The average height for adult dogs is 28 inches, for adult bitches, 26 inches.

The approximate weight of adult Newfoundland dogs ranges from 130 to 150 pounds, adult bitches from 100 to 120 pounds. 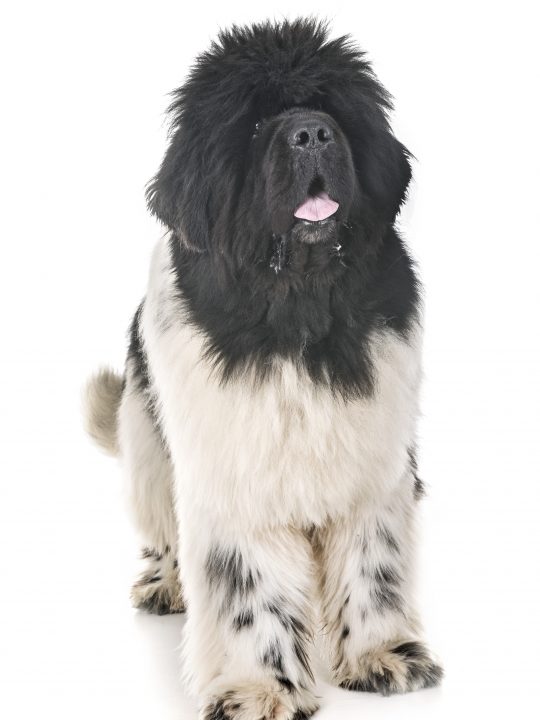 19. Four Newfies Have Lived In The White House

Read more about dogs that lived in the White House HERE.

20. The Newfoundland Dog Is Not a Dog For Everyone.

They drool, they shed. they require daily grooming, they can have hefty vet bills if they are sick and they will one day break your heart into a million pieces when they cross the Rainbow Bridge.

This hardworking loyal breed definitely isn’t the dog for everyone but it is perfect for some. If you are interested in learning more about Newfoundlands please visit the Newfoundland Club of America.

Check out So You Think You Want a Newfoundland, Here are 9 Things You Should Know.

We have a wonderful chocolate Newfie in our pet therapy group, Truffles. I adore her as does Sam. He keeps hope that someday, she respond to his flirting but she just looks at him like, 'Dude, you are such a doofus, I wouldn't be caught dead with a nitwit like you' but he still adores her. Thanks for sharing the wonderful world of the Newlandland!

Awesome post on such a lovable, giant breed! I love all dogs regardless of size & breed, but my heart beats a tiny bit faster around giant breeds! I love, love, love large dogs!! I just wrote about Combat K9s, and mentioned a few famous war dogs ~ I'll have to add the Newfoundland heroes!

I loved your post and learned so much about Newfies! One of the things that makes me saddest is the loss of the St. John's Water Dog which preceded both Newfies and Chessies. I would have loved to meet some of them as they added so much to so many breeds. Happy NPDD!

Mom loves big dogs, which is why she calls me and my 38 lbs tiny and she swears she will never have a dog smaller than me. She used to want a Newfie or Pyr, but has decided it would not be the right fit. Great dogs, but too big to do all the athletic things she wants her dogs to do. She does love watching the Newfie in our nose work classes. He is a total clown and lover boy!

Great list - I never knew about the swimming breast stroke thing - I'm going to have to go find a video of that!

Here is the best video I could find :)