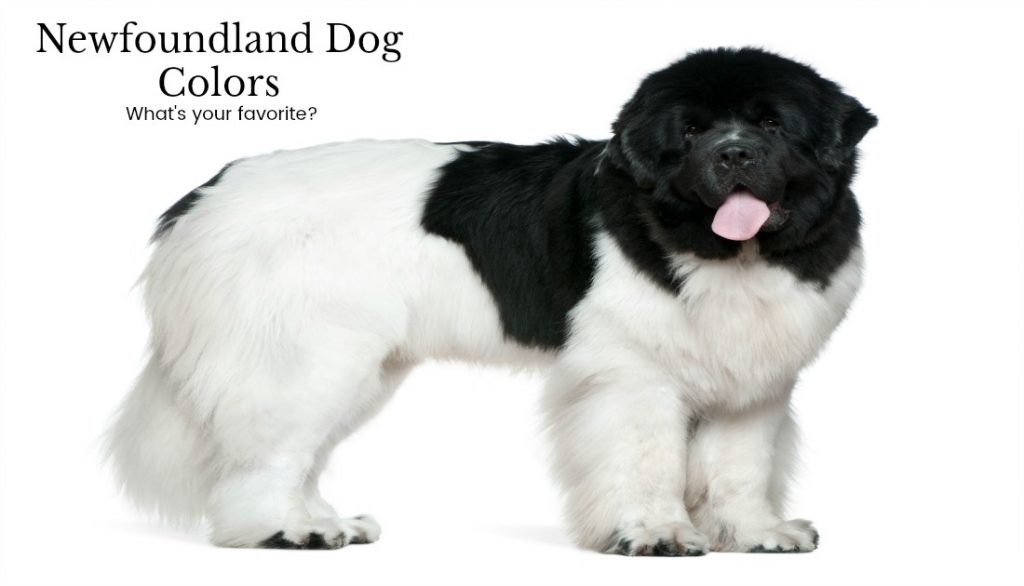 One of the most common conversations that I’ve had with people who met Sherman and Leroy for the first time was “I didn’t know they came in brown.”

Of course most people we met thought that the only color a Newfoundland could be was black which is understandable because black is the most common color seen in this breed.

People were surprised that Newfies could be other colors than black and it was always a fun conversation.

Most of us that have Newfies of other colors get this all time and because of that, our Newfs are often mistaken for other breeds.

Let’s take a look at some of the colors of the Newfoundland breed and what is acceptable across the world.

When we say acceptable it means colors that are recognized by the Newfoundland Club of America and The American Kennel Club.

It doesn’t mean that Newfies of other colors are not Newfies, it means that those colors would not be able to compete in the conformation ring.

Because all dog breeds have to have a set of breed standards.

If you don’t have a blueprint to build a house you’re going to run into a lot of problems down the road.

You need a basic set of plans for all houses for them to be built properly and for chaos not to ensue. 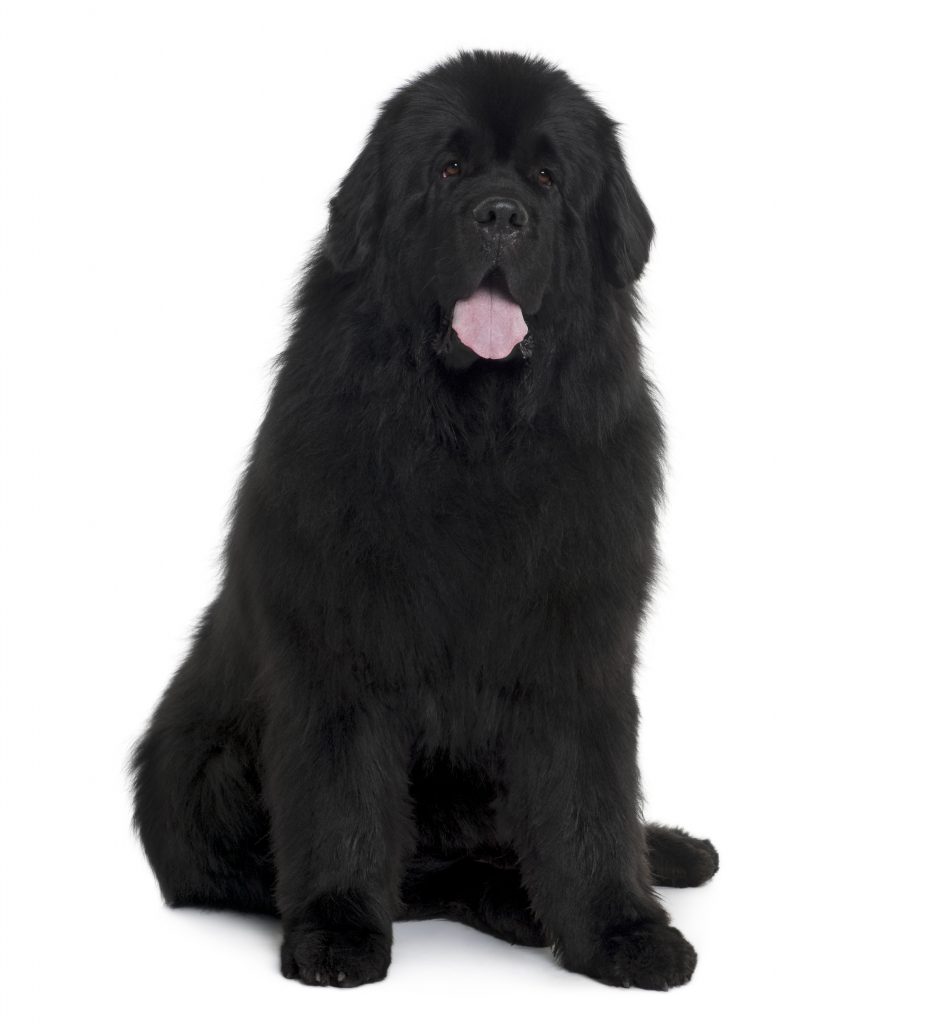 According to the Newfoundland Club of America, recognized Newfoundland colors are black, brown, gray, and white and black.

Color is secondary to type, structure, and soundness and color should not play a roll in how much a Newfoundland dog costs.

According to the Candian Kennel Club, the recognized colors of Newfoundlands are black and white & black (Landseer)

The traditional and most common color is black.

White markings on the chest, toes and tip of the tail are allowed.

In the Landseer variety, the base color is white with black markings.

The preferred pattern is a black head, saddle, rump, and upper tail.

Black, brown, and Landseer-white with black markings only.

What about those brown and white Newfoundlands?

Those are still Newfoundlands they just aren’t a recognized color in any country.

They can still be registered and compete in working and obedience trials. 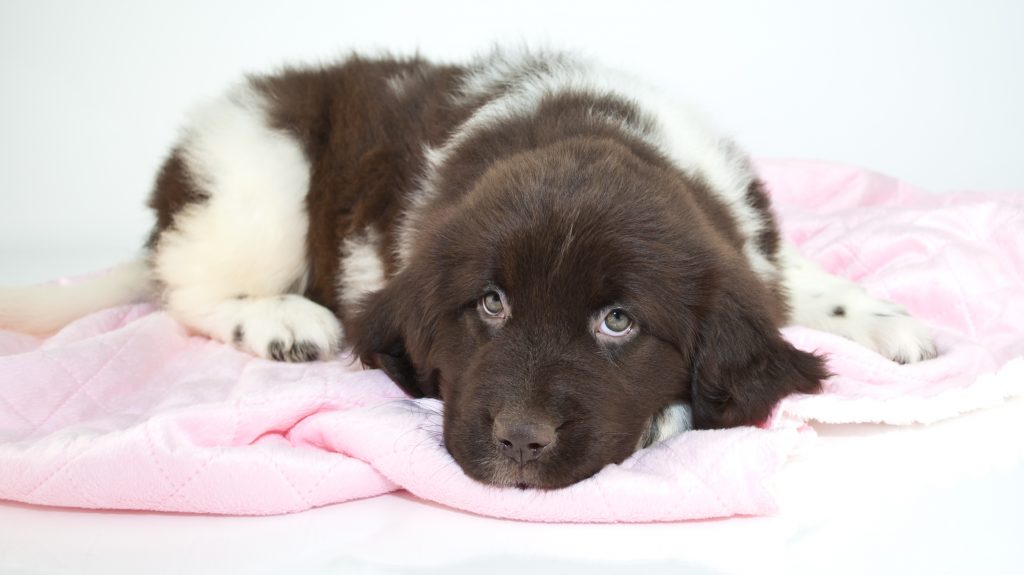 After years of research on this topic, I have no good, solid reason for this (and no one else does either)

There are plenty of opinions on the topic though.

Most reputable breeders won’t breed for a brown and white because it’s not considered an acceptable color within the standards.

Therefore, many backyard breeders or rescue groups are the only places where you will find this color.

However, if it became an acceptable color I think many brown breeders would offer this color in the United States.

What About Beige Newfoundlands?

Also known as champagne or cream.

This is not an acceptable color in any country.

What About Blue Newfoundlands?

There is no such thing as a blue Newfoundland. 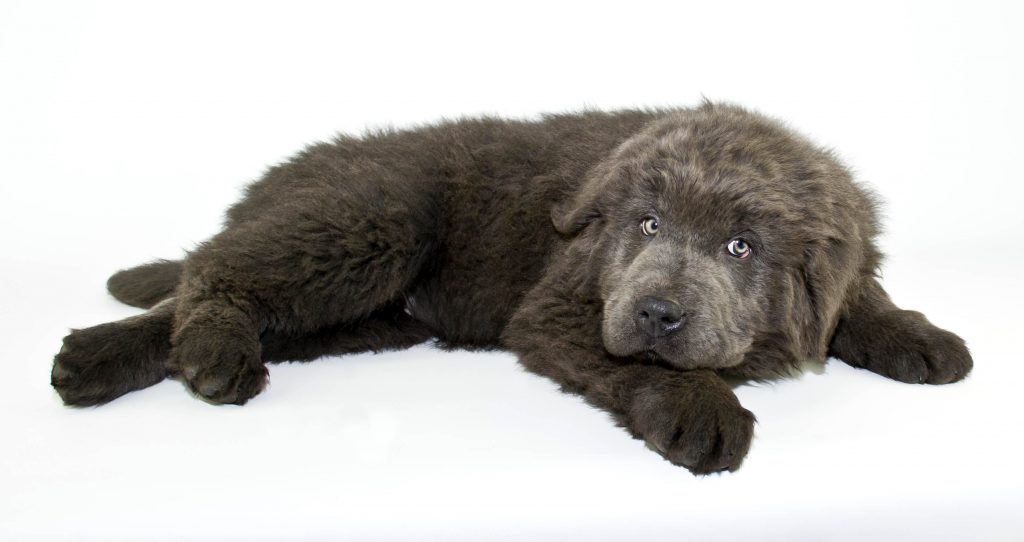 A breeder referring to a blue Newfoundland is up to no good.

White and grey Newfoundlands do exist but are not acceptable.

These white markings are on the tips of the toes, chest, and tail.

Irish spotted is just a term used, not a color.

The only Newfoundland dog color that has been proven to have health issues associated with it is grey and beige.

This is due to the dilute gene which can cause color dilution alopecia.

Color dilution alopecia “is a genetic recessive inherited condition that causes patches of hair thinning or loss, and may also include flaky and/or itchy skin.

The condition is associated with individuals who have what is called “dilute” color.”

Great question and there seems to be a lot of different opinions on this.

It seems to come down to the actual dog but many Newfie owners have said that Landseers are a bit more high-strung than other colors. 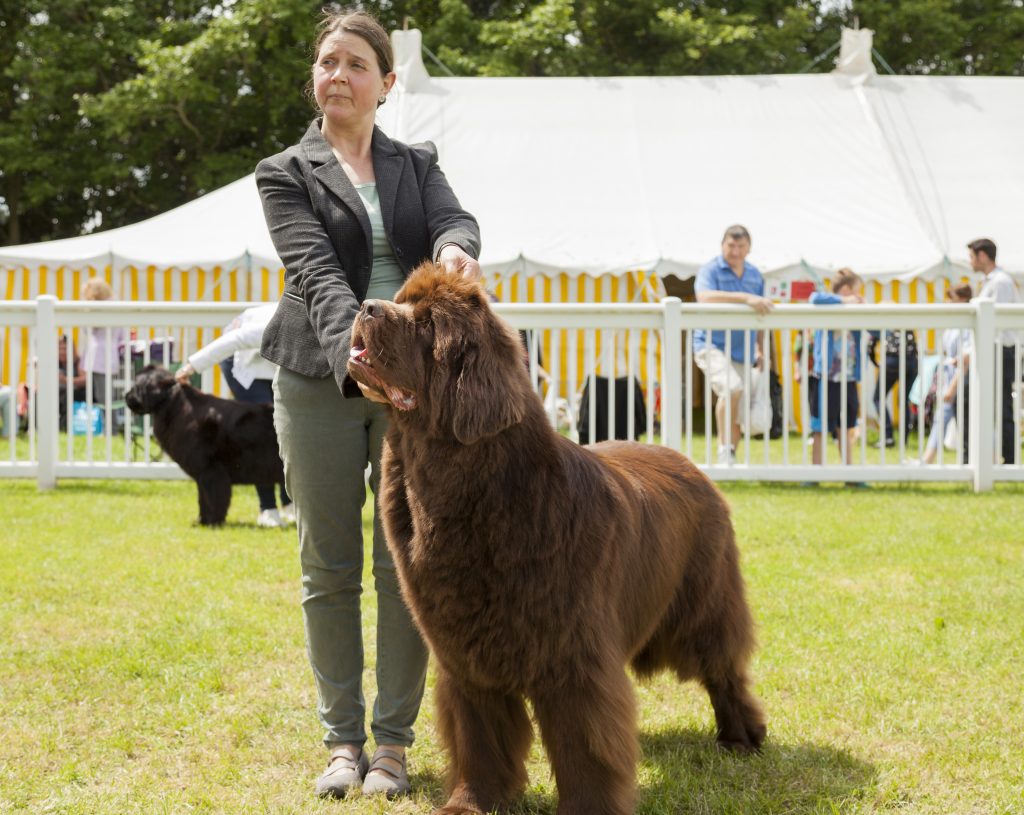 Odin is my second Landseer and I do think that they are a bit more active.

The Landseers that I’ve had seem to have a bit of a crazy side to them.

As far as browns go, Sherman was a laid back as they come but Leroy was goofier.

Here’s where things get confusing.

In the U.S. and Canada, we refer to the white & black Newfoundland as a Landseer.

A Landseer in the United States and Canada is a white & black Newfoundland. 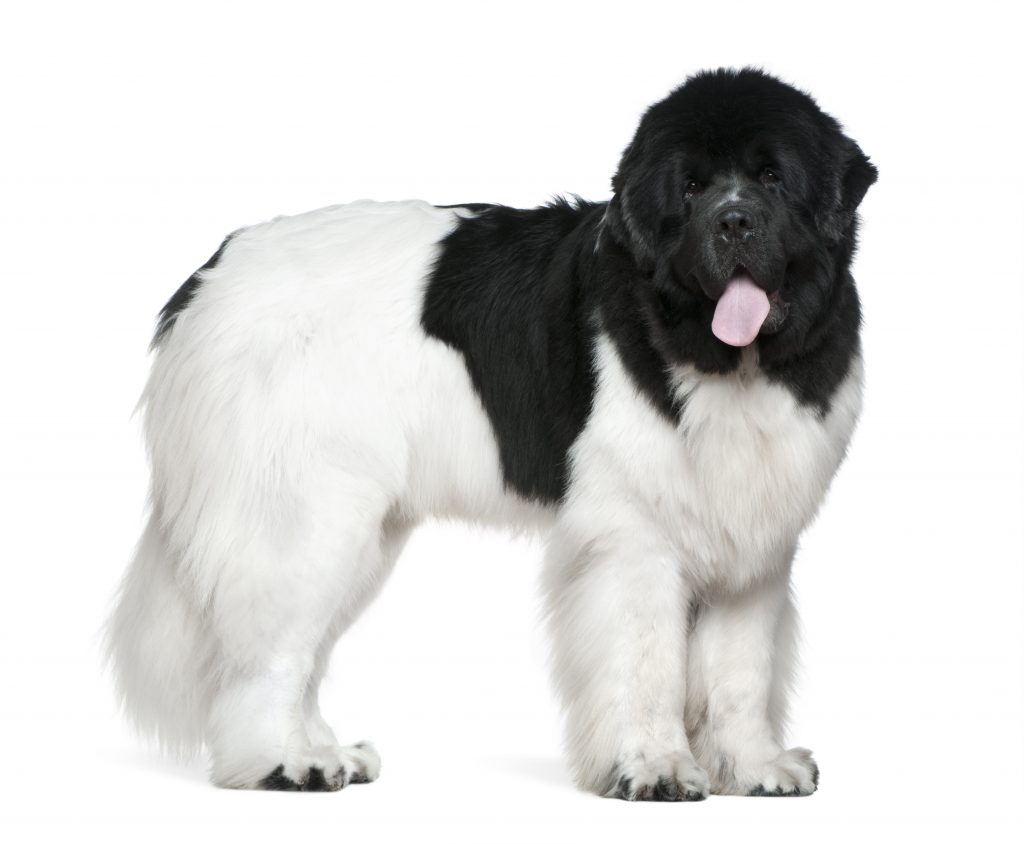 Also in Europe, there is a breed of dog called the Landseer ECT (European Continental Type).

This looks similar to an American Landseer but it is not a Newfoundland.

This breed is taller and has a different personality.

There are only 1 or 2 breeders in the United States that breed ECT Landseers and they are not a recognized breed by the AKC.

“As of 1998, every country except the U.S. and Canada recognize the ECT as a separate breed from the Newfoundland.”

Do you have a favorite color of the Newfie? Share it with us in the comment section below! 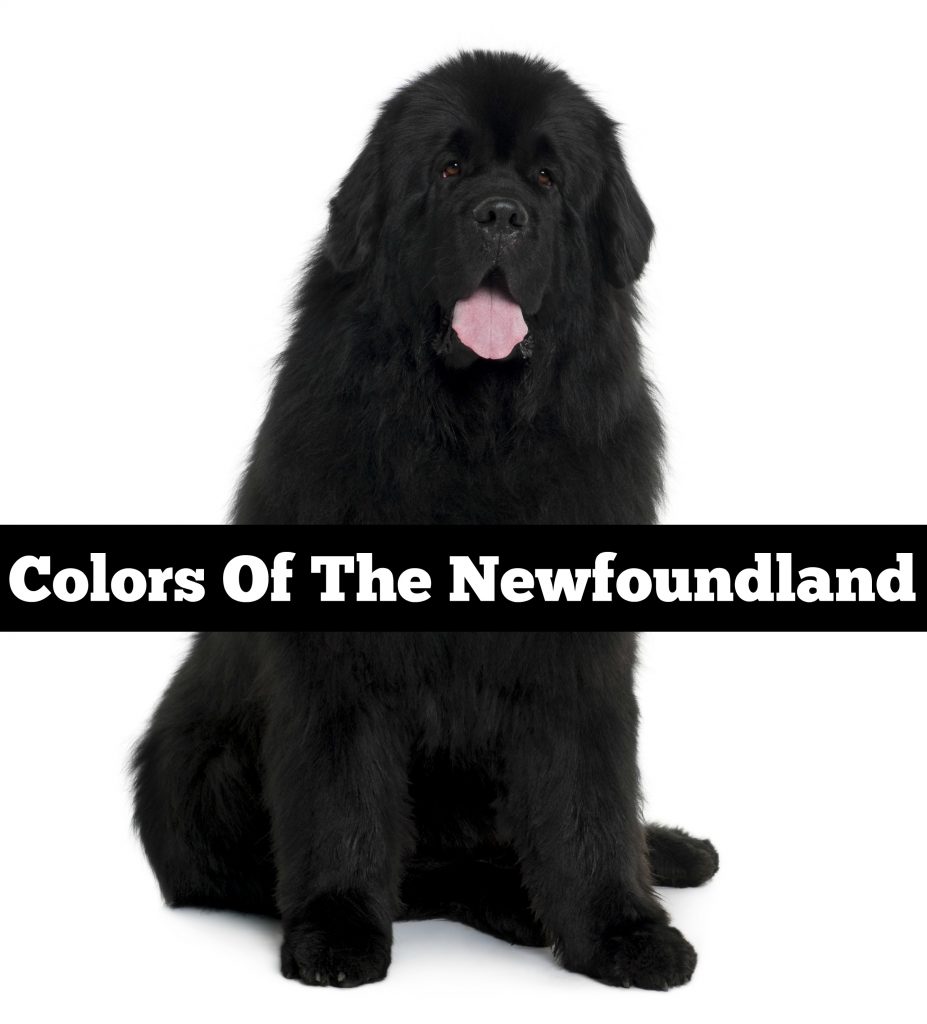 I love my brown newfs!!

This is a very interesting and informative article.

We have rescued 4 Newfies (1 being a mix with chow and lab) over the last 15-20 years In southern California. They are hands down the sweetest most loving dogs on the planet. I just don't understand the snobbiness that comes with Newfie owners.

We currently have a brown and white and a black and white. Wether our dogs are considered Newfies, Landseers or Mutts, they are the most friendly and loyal family loving dogs on the planet. Gentle Giants indeed....

I have had Newfoundlands for thirty years. I currently own a brown and white female and a brown male. My brown and white is one of the sweetest dogs I have owned. She is healthy and has all of the best traits of her breed. I do not understand the ugly comments that are made about them based on color. I believe this breed to be the perfect compliment to a family and yet people who breed for pets are being called greedy and irresponsible by Newfoundland groups if there are brown and white puppies. There is no research that I can find that supports these dogs being a health risk. (I acknowledge that dilutes are a different matter.) I bought my first Newfoundland from a "reputable" breeder. I was thoroughly vetted and could have adopted a child with less fanfare. I paid an exorbitant amount to have the privilege of full registration, drove seven hours during an ice storm, was shown 27 sets of x-rays and assured that her dogs were tested and guaranteed. When my dog was diagnosed with dysplasia, the breeder would not return my calls. In some ways these elitist practices have encouraged puppy mills as they have priced families out of a wonderful companion dog through their diligent protection of the breed and in doing so created a market outside of recognized clubs and associations. The dichotomy is that they do not consider themselves greedy when they charge 3000 to 3500 for pups. Color should not be the issue, health and temperament should be. We should breed wisely, use the option of limited registration for family dogs, ask the appropriate questions regarding pet ownership, and be a resource for the people who buy our puppies. You cannot promote the breed if people do not have access to them. Just one woman's opinion.

Your article brings me a lot of great information! Thank you!

So i found your great Newfie site. Have had 3 Newfs over 25 years. Recently lost my husband of 45 years and still have a 6 year old Newf which I will take care of forever. Recently sold the farm and moved to a gated community with lakes and forest walking trails. He has not been socialized with people(likes to hug them) and not dog socialized.. just need some advice.