Newfoundlands are a strong and powerful working dogs.

Their large size is often both an attraction and a deterrent to those not familiar with the breed.

While size is desirable in the breed it should never be at the expense of the health of the dog.

Wouldn’t it be great if we could have a magic crystal ball that could tell us exactly how much our Newfies were going to weigh when they were full-grown?

That would solve so many questions!

How Much Do Newfoundlands Weigh?

According to the AKC and the Newfoundland Club of America, adult male Newfoundlands weigh an average of 130-150 pounds.

It’s important to mention that this is just a basic guide and a dog’s body structure should also be taken into consideration.

It’s perfectly fine for an adult male Newfie to be healthy and weigh under 120 pounds. 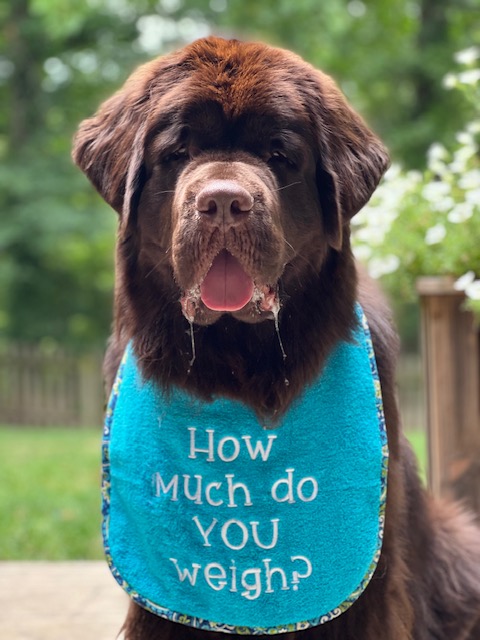 Odin has a much smaller frame than Sherman and Leroy did.

He was 117 pounds and that’s a good weight for his frame.

Any bigger and he’s at risk for being overweight and this can put more strain on his joints.

The average height of a full-grown adult male is 28 inches at the shoulder.

For a female, it is 26 inches at the shoulder.

If your Newfie is a few inches shorter than that their weight should reflect it.

How Much Do Newfoundland Puppies Weigh?

On average, Newfie puppies gain about 10 pounds per month so a 6-month-old puppy will weigh about 60 pounds.

A one-year-old male puppy on average weighs about 100-120 pounds give or take a few. 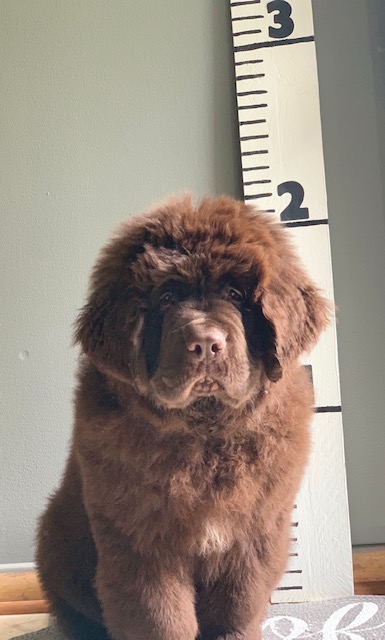 (This is a wide range, yes, but if I put 130 pounds, it’s not realistic to the Newfies we are seeing today)

I’ve seen a lot of people get nervous when their Newfie reaches 12 months and they haven’t hit the 100-pound mark.

If they are healthy and eating fine there is no reason to rush it.

I’ve tried putting together a growth chart and it’s just not accurate and I also don’t want someone comparing their Newfie’s growth to mine.

I also don’t want someone to try and pack pounds onto their Newfie puppy if they’re not in the correct “weight” range.

How much your Newfie weighs will be based on several factors including their bone structure, their gender and their genetics. 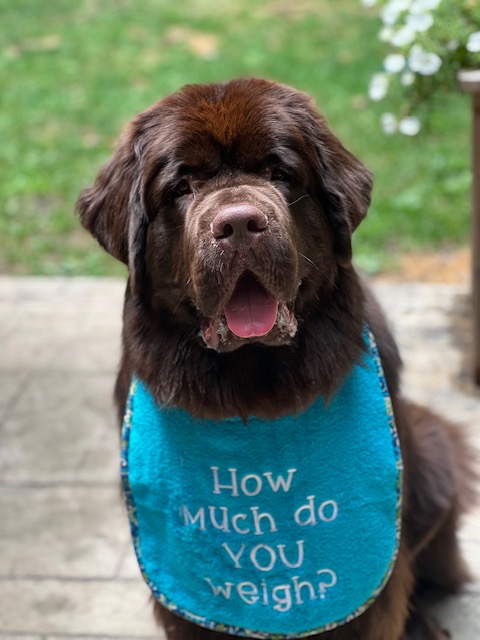 YOUR PUPPY WILL GROW.

If someone has a growth chart it will be filled with inaccuracies.

There are a few weight charts out there that say a 12-month-old male Newfie should weigh up to 130 pounds.

130 pounds is way too much for a 1-year-old Newfie to weigh and that’s putting a lot of extra weight on their growing joints.

My 18-month-old male Newfie weighs 125 pounds and he is a tall Newfie.

How Big Does A Newfoundland Dog Get?

It’s hard to judge how much your Newfies will weigh when they are fully grown.

You should take into consideration the weight of the dam and sire to give you a ballpark figure. 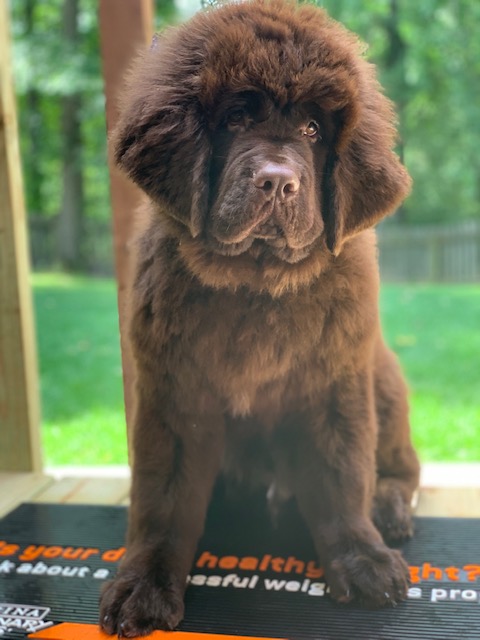 Lou is currently 4.5 months old and weighs 58.9 pounds so right now he’s a little bigger than the chart gives for his age range.

Many people are attracted to the Newfoundland breed because of their massive size however, very few healthy Newfoundlands are going to weigh 200 pounds.

That should not be a goal weight for any owners to get their Newfoundlands to. 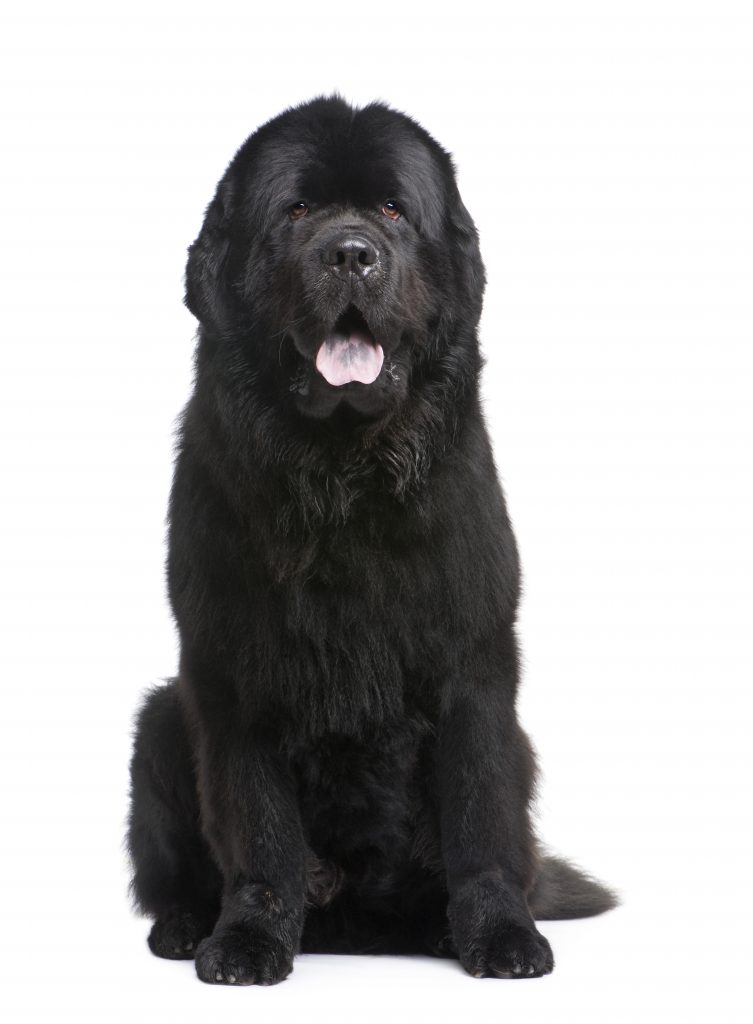 Bigger is not always better, in fact, bigger usually leads to more health problems down the road especially when it comes to joints.

A Newfoundland is a working dog and should be lean.

You should be able to feel the evidence that they have ribs even through their thick coat.

A 200-pound Newfoundland should be taller than 28 inches at the shoulders also.

A 200-pound male Newfoundland that is 27 inches is overweight.

When Do Newfoundland Dogs Stop Growing?

Some Newfoundlands stop growing between 2 and 3 years of age.

Others may continue to grow up until 4 years of age.

Normally, Newfoundlands grow up and then they fill out so at 1 year of age your Newfie may reach their full height but will continue to bulk up for the next year or longer. 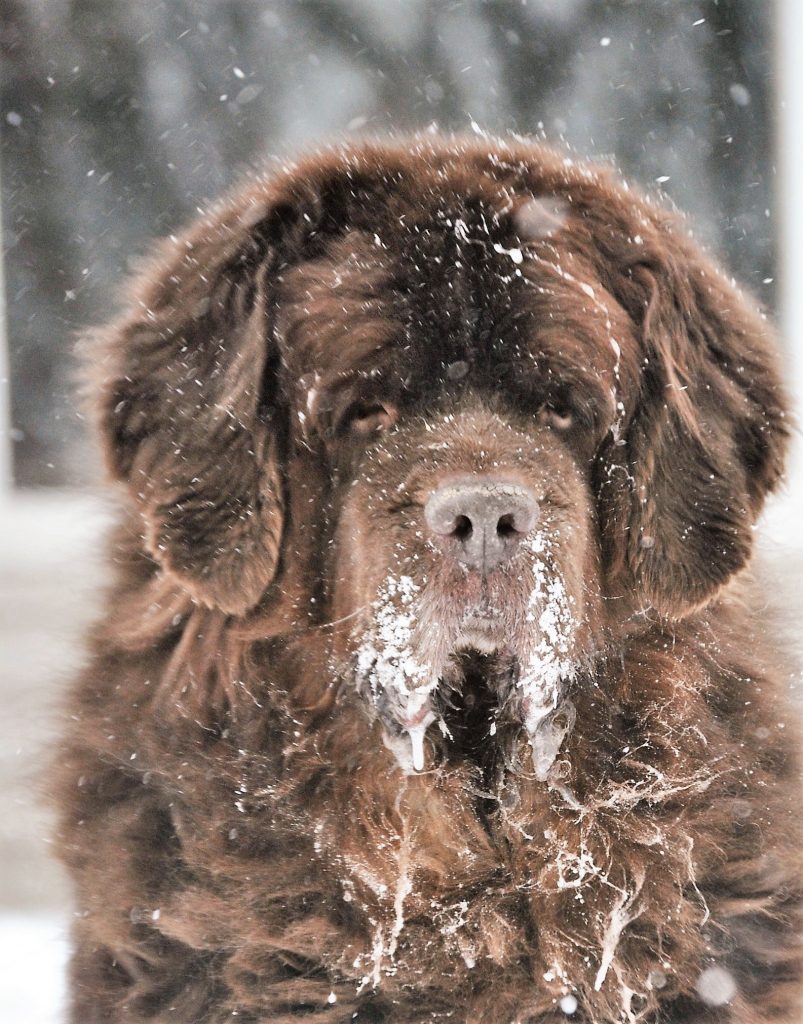 I feel that Sherman stopped growing at around 2 1/2 but Leroy was a late bloomer and wasn’t done growing until closer to 4 years of age.

With Odin, his estimated age was 2 1/2 when we adopted him and I feel like he did grow a little bit over the first 6 months that we had him.

Newfies will stop growing but they will not stop gaining weight if they are overfed and not getting appropriate exercise.

How To Weigh Your Newfoundland

Since Newfies are big it’s not as easy to weigh them as it is little dogs.

In most cases, a regular bathroom scale isn’t going to work and you’ll need something a little bigger and sturdier.

The best way to weigh your Newfoundland is at your veterinarian’s clinic.

You can do this at scheduled check-ups or, at most vet clinics, you can stop in and weigh your dog.

Some pet stores such as Petco will also have dog scales available in their stores.

You can also purchase pet scales online to have in your home. 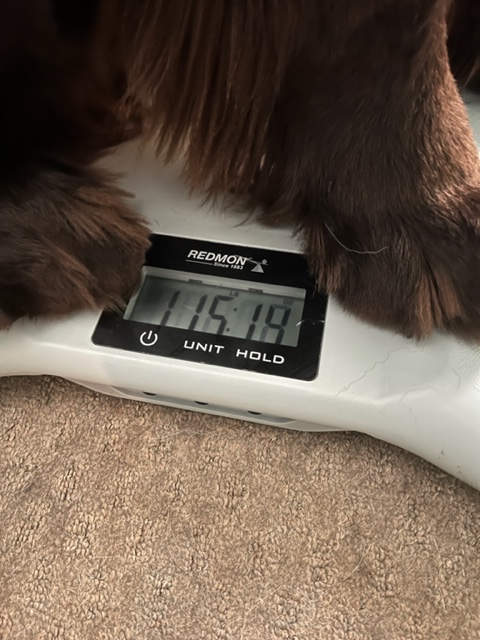 I have this dog scale and while it’s a little small for Newfies, I can still get an accurate weight on them.

Since Newfoundlands can easily become overweight, it’s a good idea to weigh your Newfoundland regularly so you can maintain that weight throughout their life.

An Overweight Newfie Is An Unhealthy Newfie

A healthy Newfie is going to be lean.

They are going to be robust and they should easily be able to do the jobs that they were bred to do.

They may look a little round to the naked eye but if you put your hands on a big fluffy Newfie you should be able to feel their body’s contour. 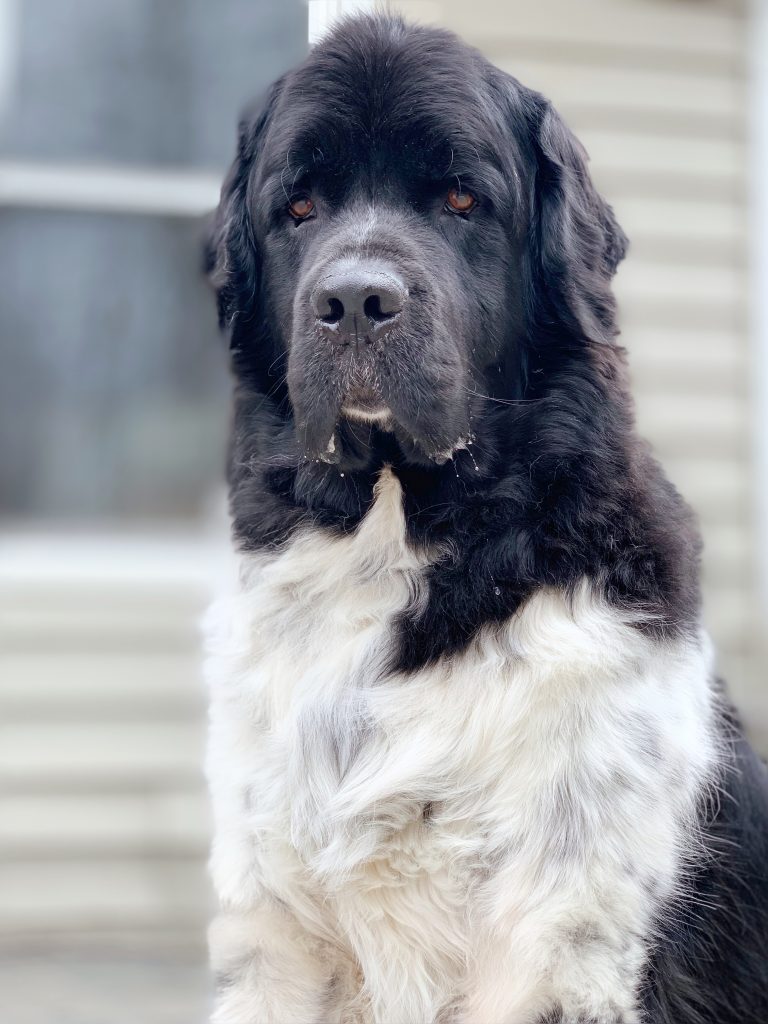 I always like to assess their body condition when I give a bath.

This allows me to really see their shape.

An adult Newfie should also have more muscle than fat.

Over the last 10 years, I feel that we are seeing a lot of Newfies on the smaller side but people are still focused on the higher average weight.

As a community of people who love our breed and want to see it continue to thrive, we need to focus less on the number and more on health. 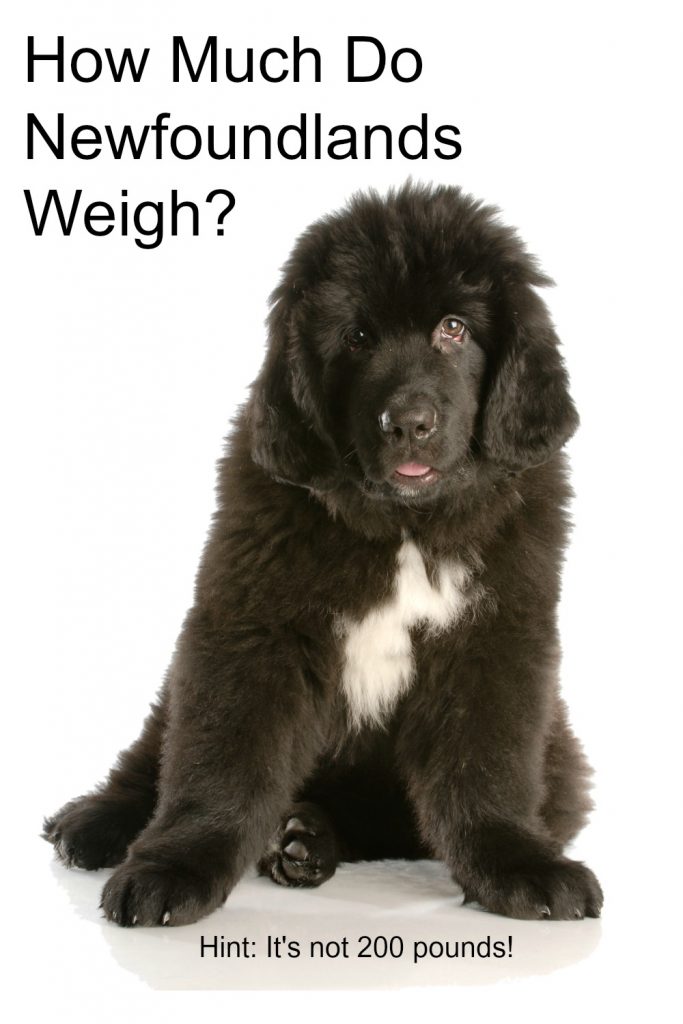 The recommended amount of cups of food to be fed to your dog is based on them only getting that food for the day.

It does not take into consideration the 15 treats they got, the peanut butter in the Kong, the chips they got from begging, or the lack of calories that they didn’t burn because they didn’t get out and exercise due to the weather.

I’ve recently been adjusting Odin’s food depending on how much extra stuff and exercise he gets for that day so he is not getting the same amount of dog food every day.

I think for people getting a Newfoundland, one of the reasons you're getting that breed is because of their size. 120 lbs is still a giant dog. I think people should focus more on the health of their Newfie and not getting him up to an unhealthy 200 lbs.

Samson weight 121 lbs. and our vet feels he is a perfect weight :)