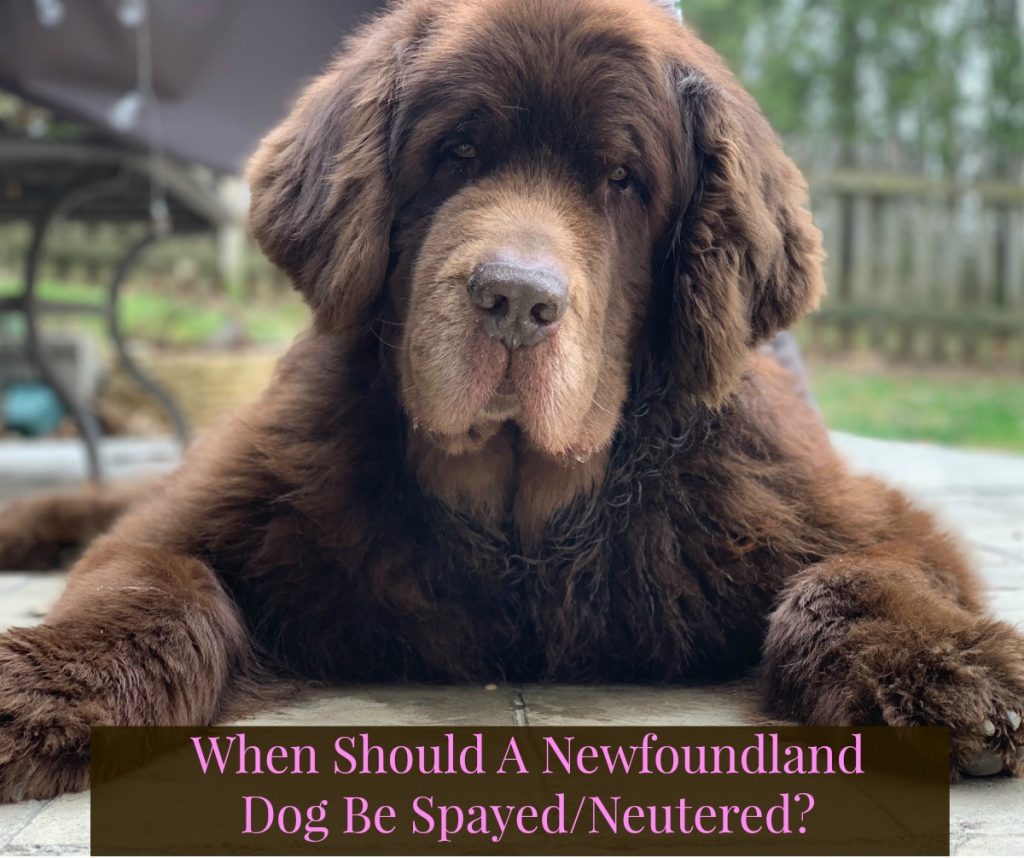 One of the most common questions asked by Newfoundland dog owners is when is the best time to spay or neuter their dog.

Over the years it’s been a debated topic by breeders, owners and veterinarian professionals.

Currently, the recommended age that a Newfoundland dog should be neutered is 18 to 24 months due to the possible health problems that can arise from altering before that age.

What does it mean to spay or neuter?

In females (spay) the ovaries and the uterus are removed.

In males (neuter)  the testicles are surgically removed.

When removing the sexual organs, the sex hormones are removed. 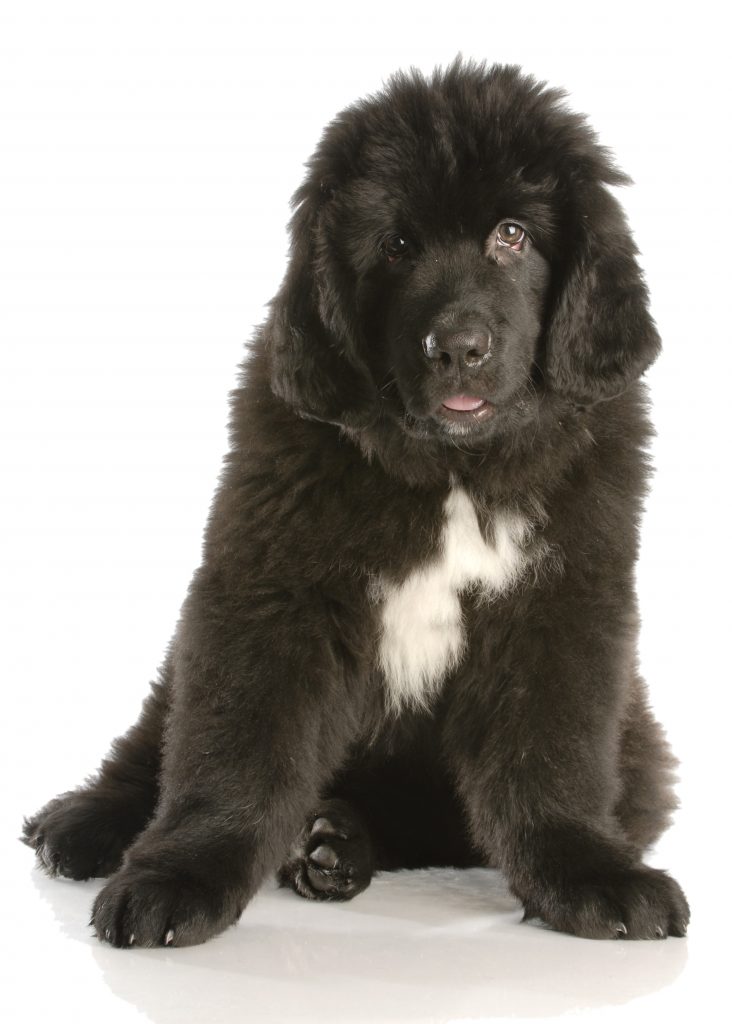 What are sex hormones?

This is testosterone and androsterone in males dogs and estrogen and progesterone in female dogs.

Part of the responsibility of sex hormones is to regulate growth.

This extended growth in the Newfoundland and other giant breed dogs may result in a dog that may be taller or “leggier” than it was meant to be making the dog prone to more injuries because until the growth plates close, they are soft and vulnerable to injury.

Think along the lines of possibly an increased risk for cruciate tears, hip dysplasia and elbow dysplasia. 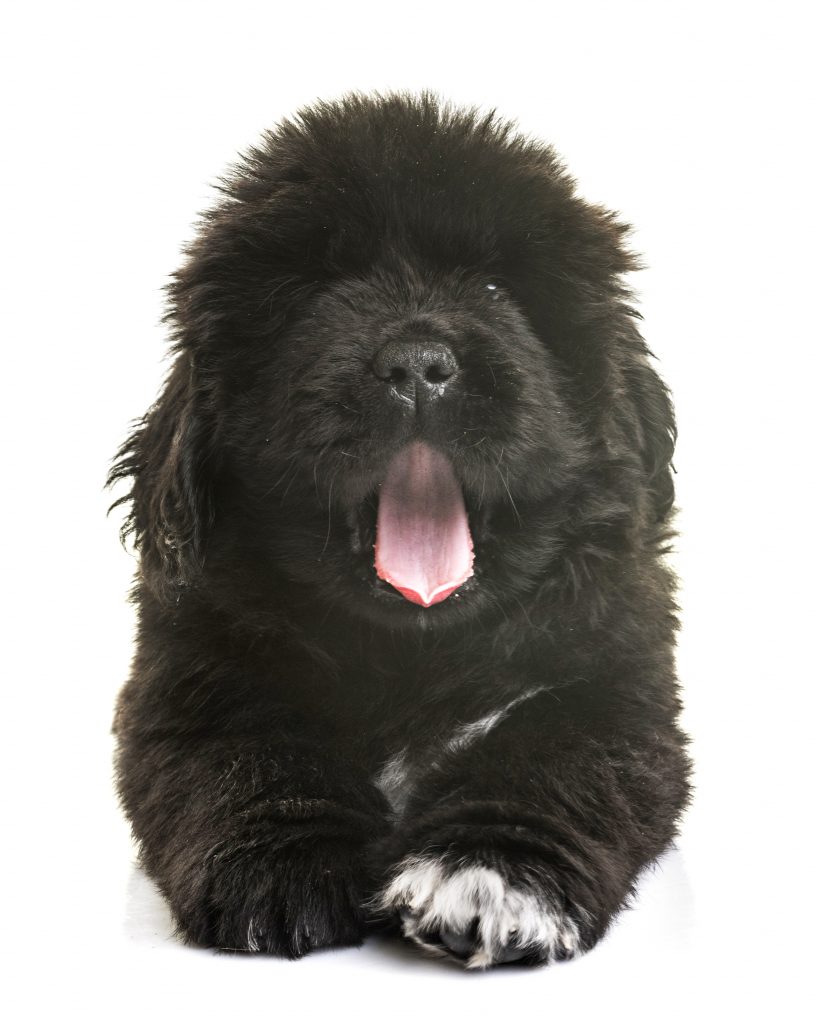 What Are Growth Plates?

Growth plates are cartilage that are positioned at the end of long bones in dogs.

They contain rapidly dividing cells that allow bones to become longer until the end of puberty.

At what age this happens ultimately depends on the breed and size of the dog. 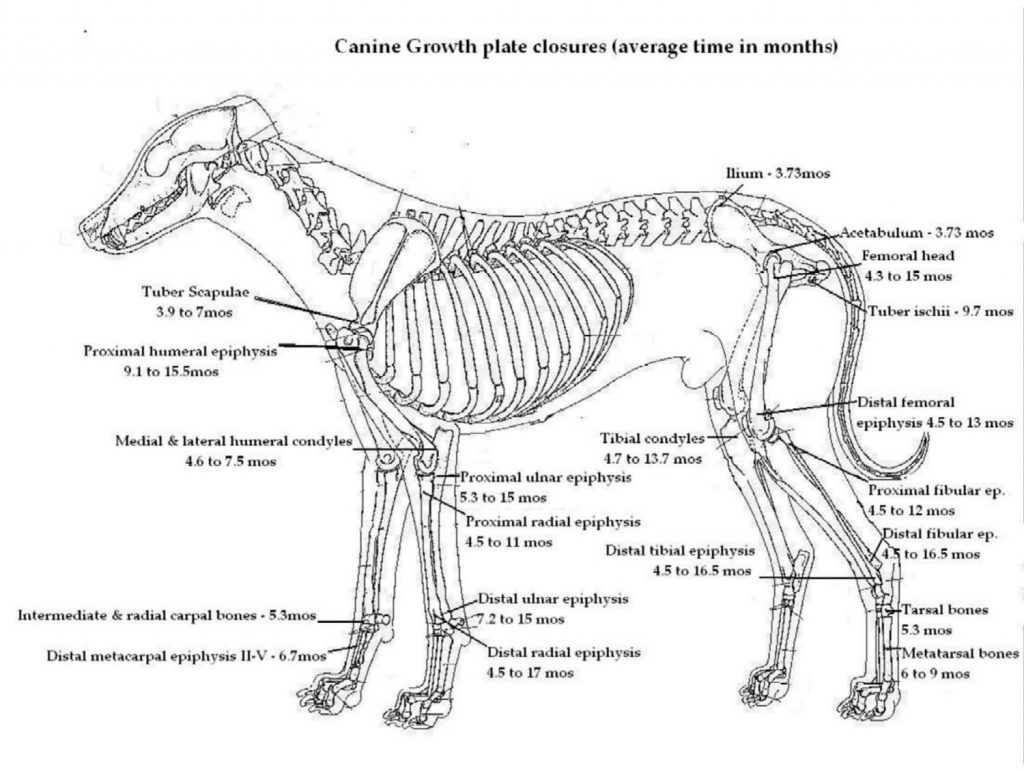 In smaller dogs growth plates can close as early as 6 months where with larger to giant breed dogs it may be closer to 18 to 24 months until growth plates close.

At this point, the plates “close” because they’ve contributed all they can to the growth of the bones.

An injury to the growth plate might not heal properly, nor heal in time for a puppy to grow up straight and strong.

You can always have your veterinarian take x-rays if you are unsure if the growth plates on your dog have closed.

Eliminates the risk of testicular cancer.

Reduces the risk of perianal fistulas

Decreases the risk of missing dogs and intact male dogs being injured or killed when they are seeking out a bitch in heat. 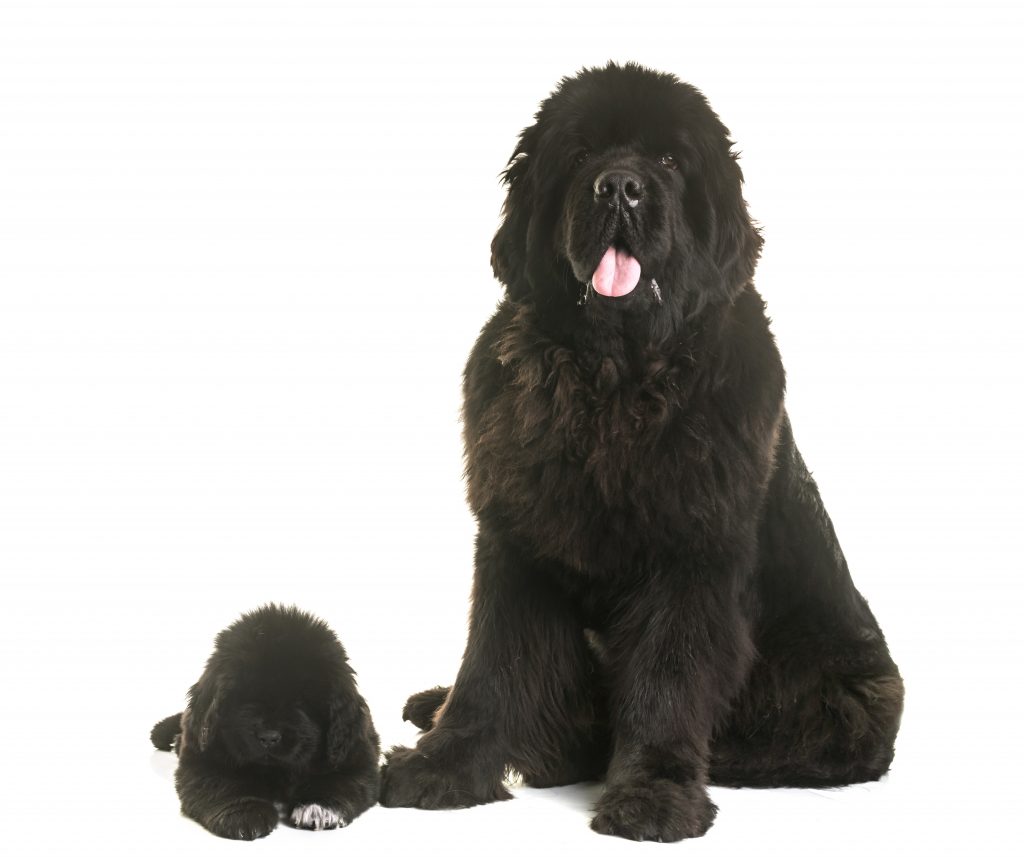 For female dogs, the pros and cons are a little more complex.

If done before 2.5 years of age, greatly reduces the risk of mammary tumors, the most common malignant tumors in female dogs

Reduces the risk of pyometra. Pyometra is an infection of the uterus and it can be a life-threatening condition that needs immediate attention.

Reduces the risk of perianal fistulas

Reduces the risk of uterine, cervical, and ovarian tumors.

While there are also cons for both spaying and neutering dogs, most Newfoundland dog owners, unless you are under a show contract, should have signed a pet contract with their responsible Newfoundland breeder that states that the dog be altered at a designated age.

Therefore, in order to stay within the rights of your contract,  we will not be addressing the cons in this post but articles for further reading are linked below if you would like to do further research. 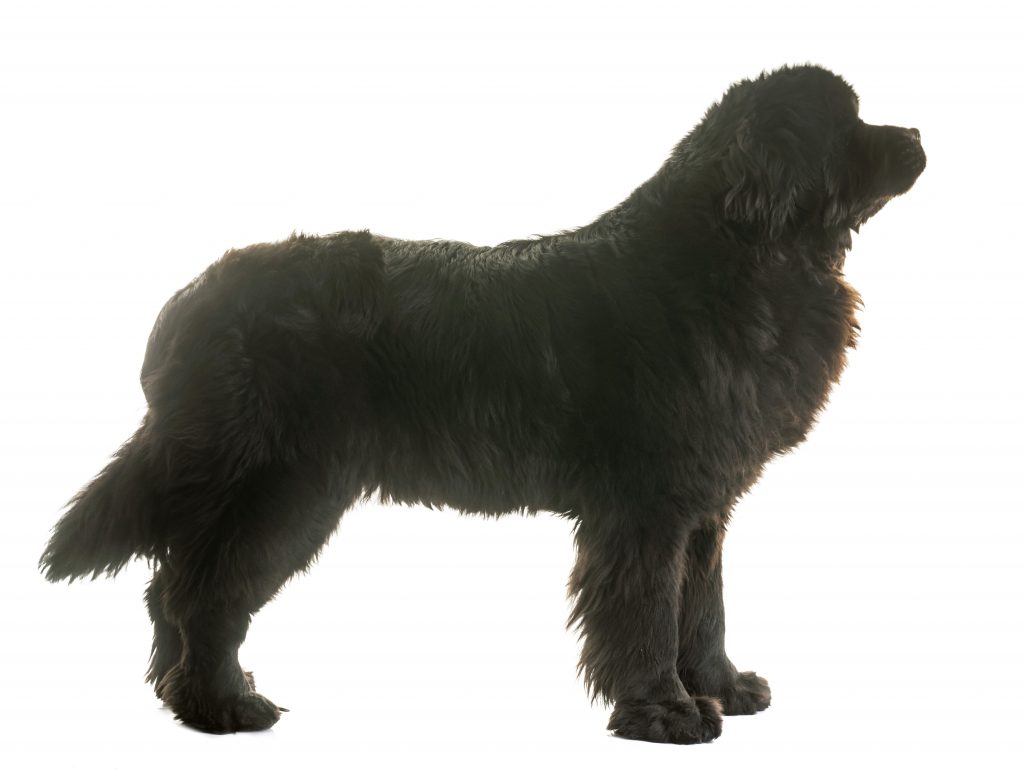 Possible Pros of waiting until 18-24 months of age to spay and neuter your Newfoundland.

Scientific evidence suggests that waiting until the growth plates close on a giant breed dog can provide many benefits to both male and female dogs.

Decreases the risk of osteosarcoma

If altered before 1 year of age, the risk of osteosarcoma  increases greatly.

A 2002 study on Rottweilers suggests a cause-and-effect relationship, as sex hormones are known to influence the maintenance of skeletal structure and mass, and also because their findings showed an inverse relationship between time of exposure to sex hormones and risk of osteosarcoma.

The risk of osteosarcoma increases with breed size.  It is a common cause of death in medium/large, large, and giant breeds.

A 1991 study revealed that neutering before growth plates are closed may increase the chance of joint disorders, “such as HD, CCL, and possibly ED.

Confounding factors that may influence the nature of a neuter-related joint disorders are the breed-specific gender vulnerabilities, including growth rate differences, as well as the timing of growth plate closure, which occurs more quickly in males than in females.

In the males of this study, the occurrence of HD was doubled in the cases with early androgen removal as compared with intact males, but in females, removal of the ovaries did not appear to be associated with an increased likelihood of HD.

This presumably reflects the effect of gender on growth-plate development.

However, growth-plate disturbance in both males and females seems to have played a role in the occurrence of CCL in early-neutered dogs.

This joint disorder was not diagnosed in either intact males or females.” 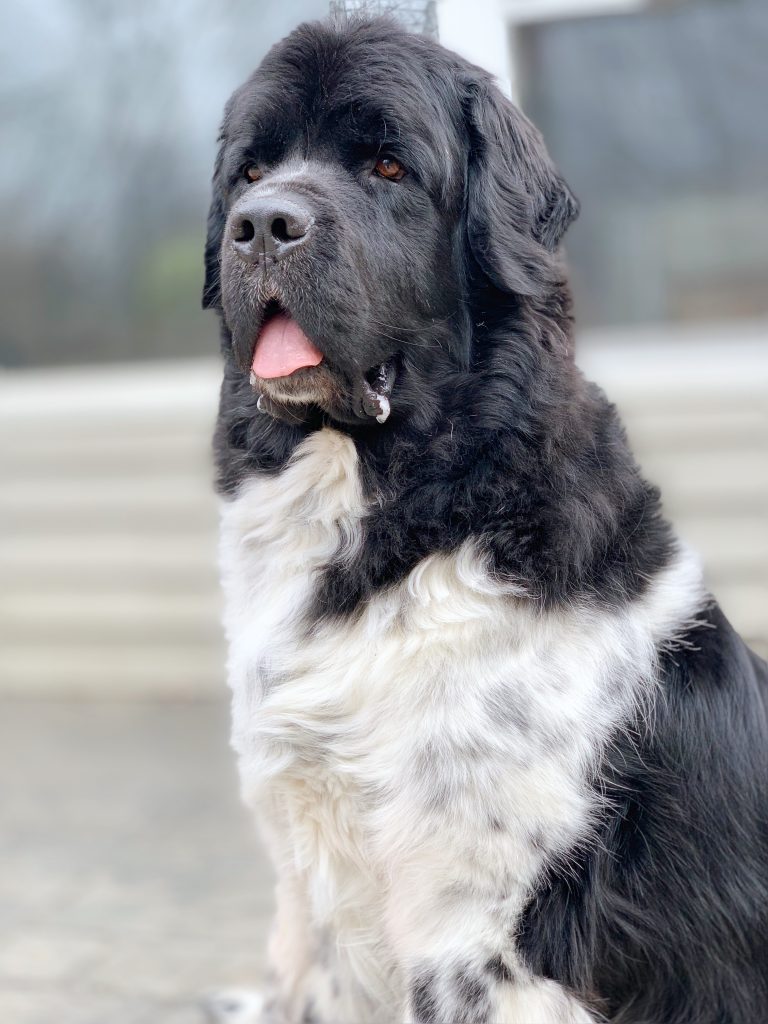 Decreases the risk of dogs becoming obese early on in life

Due to changes in metabolism, spay/neuter dogs are more likely to be overweight or obese than intact dogs.

Obesity can increase the risk for joint issues, heart issues and drastically shorten the lifespan of any dog

“One study found a two-fold increased risk of obesity in spayed females compared to intact females.

If your Newfoundland dog has already been spayed or neutered before 18-24 months.

If your dog has been altered before 18 to 24 months, there’s no need to panic.

As we learn more about our giant breed dogs we make adjustments in our care for them.

For years it was said to spay or neuter your dog at 6 months of age or sooner but now there are options and studies that have been ongoing to give us the chance to provide a healthier and longer life for our giant breed dogs. 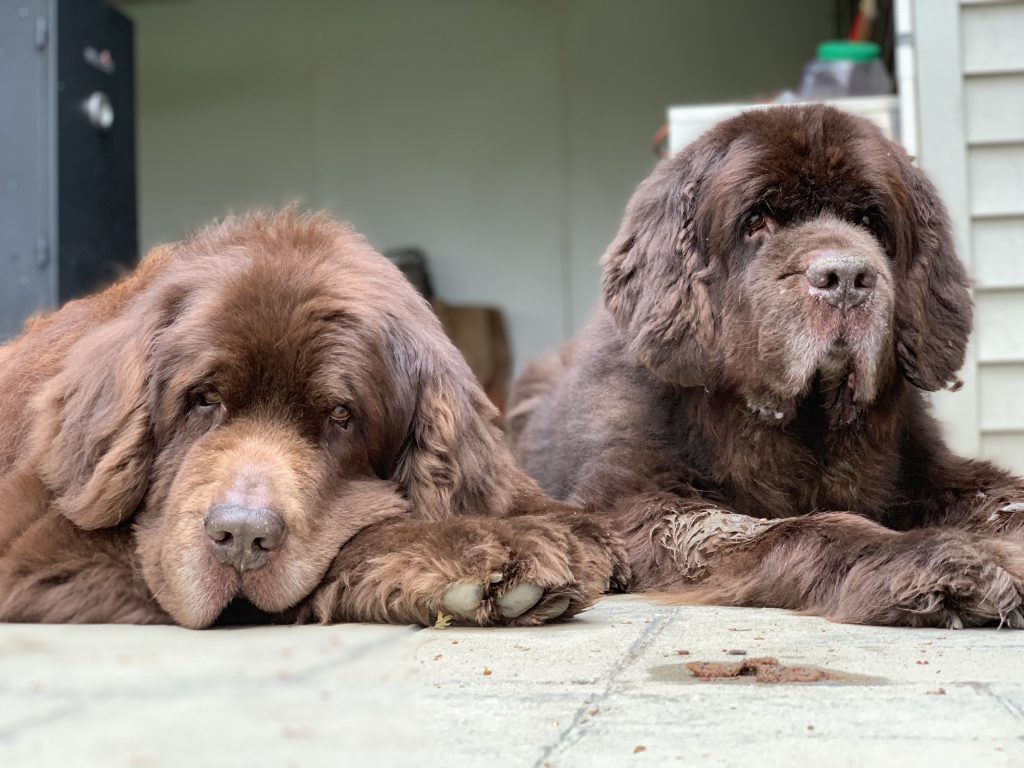 Sherman and Leroy are not neutered.

They were show dogs in their earlier years and I opted not to neuter once they retired.

Both boys have never been considered overweight, they have not had prostate or testicular cancer.

Neither has hypothyroidism, incontinence or bone cancer.

However, Sherman did rupture his cruciate when he was 5 years old and Leroy suffers from IBD and a severe case of stubbornness.

Every single dog is different and the risks and benefits of spay or neuter will vary from one dog and from one breed to the next.

Some dogs, such as dogs that are in rescue situations or that have severe health conditions may need to be altered at an earlier age and there’s nothing that can be done about that.

Unfortunately, until we can get the general population of dog owners in the United States to become responsible with their dogs and properly care for their dog their entire life, spaying and neutering is the most common and responsible approach. 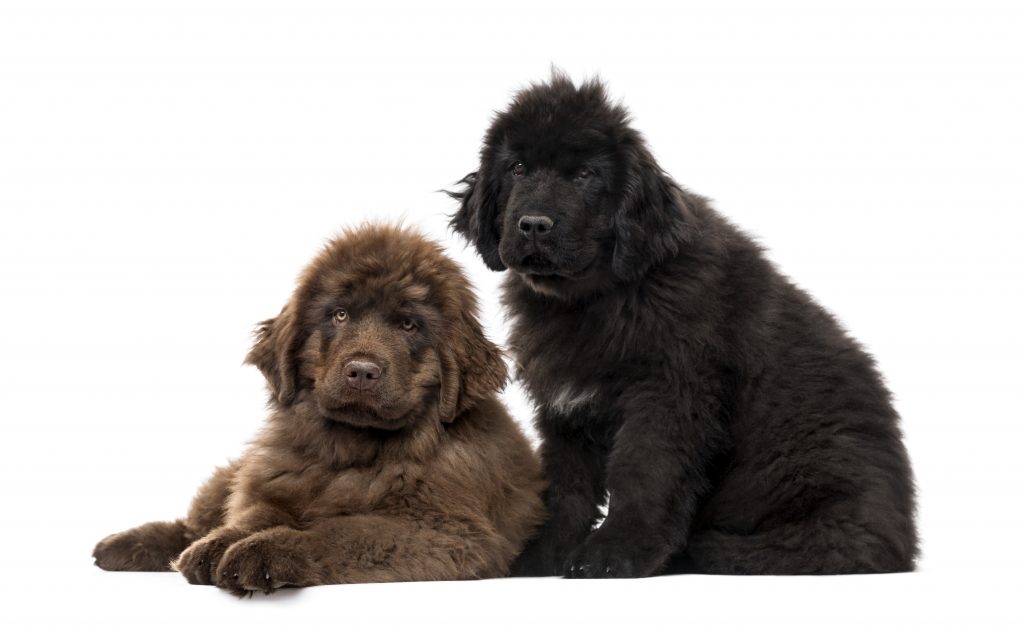 If You wait to spay or neuter be prepared

If you’ve decided to wait until your Newfoundland is between 18-24 months to have them neutered/spayed be prepared for some challenges that might happen during that time.

You’re in the teenage stage which is trying enough but now you have hormones.

You have a growing, giant breed dog that has hormones racing and they are trying to find a balance in life.

Things can get challenging depending on your Newf’s personality.

You’re taking on more responsibility controlling and training your Newfoundland.

Dogs that are not neutered can wander.

If they smell a bitch in heat they can jump fences, stop eating, howl and drive you insane.

You need to be responsible and keep your dog safe if this happens. 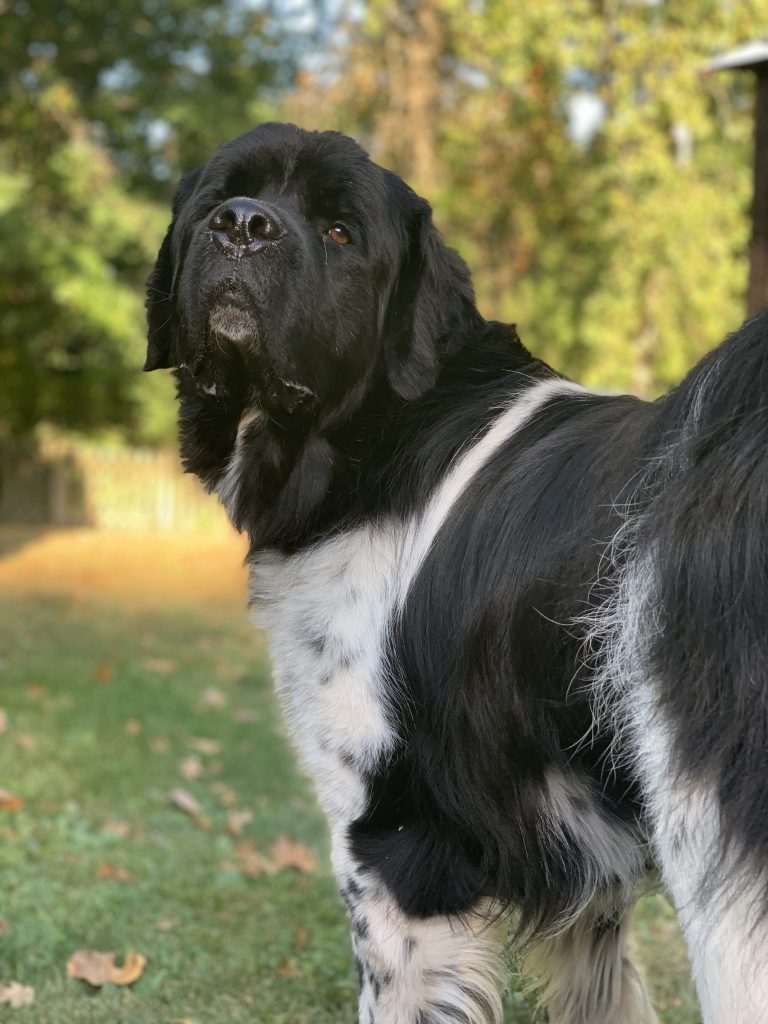 Unaltered dogs are not welcome in most dog parks, doggie daycare centers, and boarding facilities.

Females that are not spayed will usually go into heat around 12 months. Be prepared for it.

Recovery for a dog spayed/neutered later on in life can result in a longer recovery time than those that are altered earlier than 1 year.

Many dog owners will have their dog spayed or neutered to stop unwanted behaviors such as aggression or marking.

While altering may help some dogs with these behaviors, altering does not replace training and it may not stop the actual behavior.

While dogs that are intact are more likely to urine mark, all dogs have the ability to do this.

Dogs mark their territory to make other dogs aware of their presence. They do this by peeing on trees, furniture, and anything they can squat or lift their leg on. Removing their testicles will not always stop this behavior.

Our Beagle, who passed away a few years ago, was neutered and he marked his territory up until the day that he passed.

Sherman and Leroy mark their territory, outside. There were a few years where we had issues with it happening in the house but through training, we stopped that behavior. 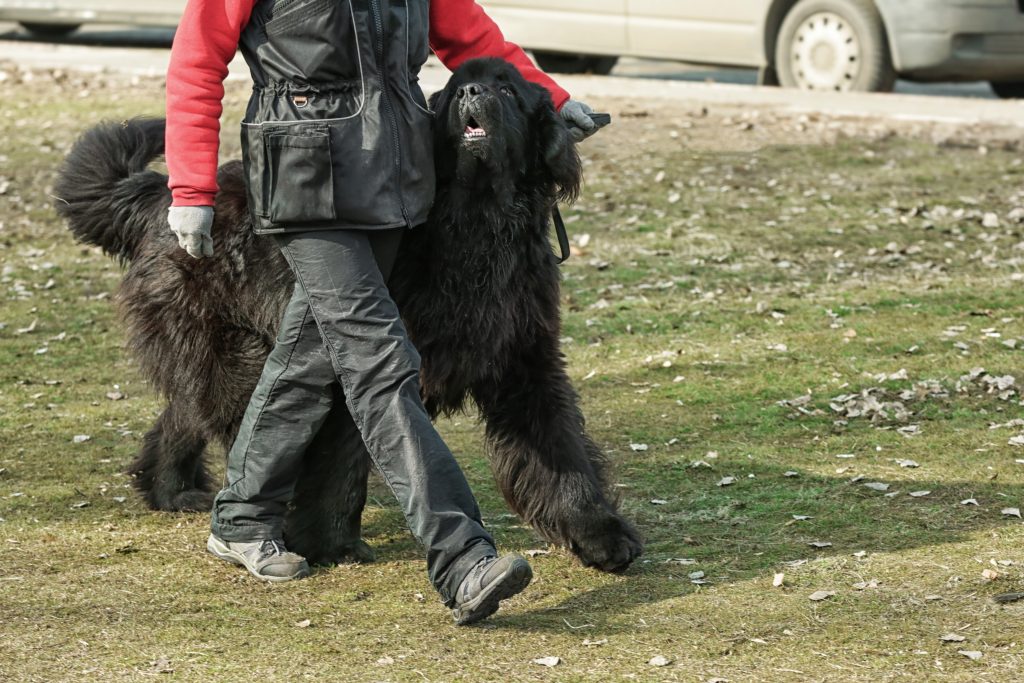 Humping is a sexual position in dogs, It can be an instinct, a learned behavior, or an act of playing. A dog could hump after he is neutered, especially if it’s something he thinks is play.

Our Beagle humped Leroy’s tail, Sherman’s leg and a few of my pillows well into his senior years.

Leroy has humped Sherman before in more of a play type of way. He still does it sometimes.

It’s thought that intact dogs are more aggressive than altered dogs and removing the hormones will cure the aggression.

I know first hand that this isn’t true, at least in my dogs.

Many of you know that for a few years we had sporadic aggression issues with Sherman and Leroy. My vet insisted that I neuter them and all the aggression would go away.

I wasn’t convinced that this was the answer so I reached out to my breeder and a dog trainer.

With a lot of time and training, the issues stopped and they’ve lived happily together for years now.

Intact dogs may show more aggression to other intact dogs but again, this goes back to training and being able to recognize and control your dog.

Sherman has been known to puff his chest out at a few intact dogs before at dog shows, but being able to reign him back in before he acted, kept everyone safe. 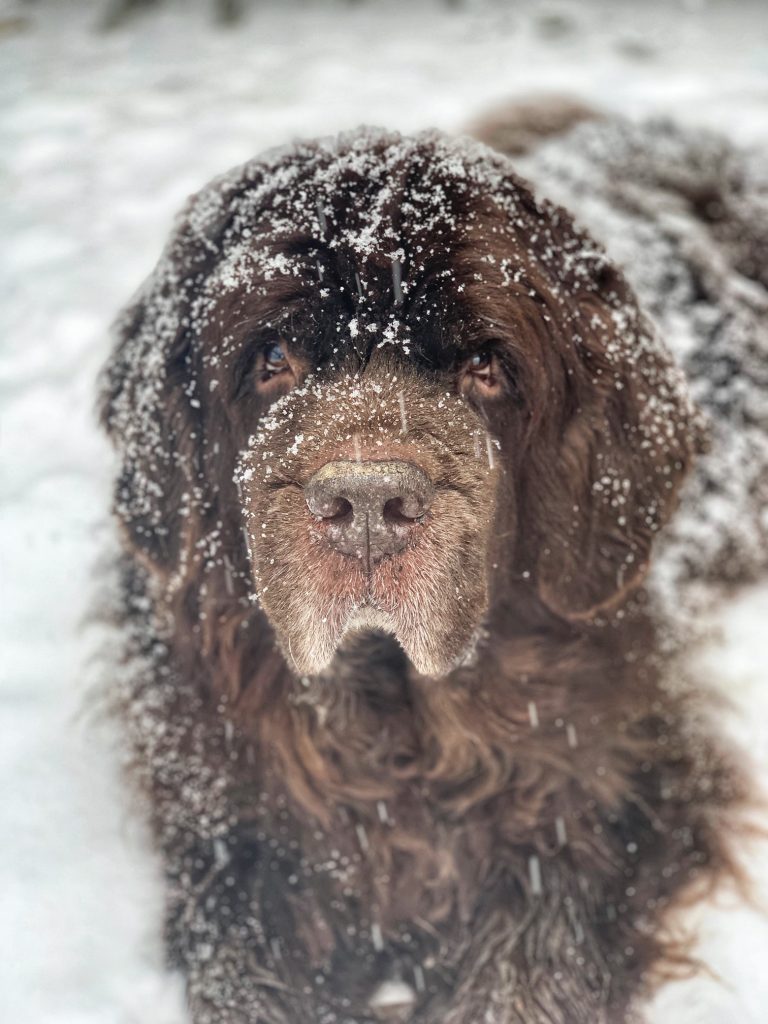 Spaying and neutering should be done for health reasons and to control the pet population, not as a tool to try and prevent unwanted behaviors.

I hope this has been helpful for those searching for more clarity on when to have your Newfoundland spayed or neutered.

If you’re getting conflicting information from your veterinarian it might be a good idea to sit and down and voice your concerns about early spay and neuter procedures on giant breed dogs.

If they’re not open to hearing your concerns then it may be time to search for a veterinarian that has more experience with the breed.

Determining the optimal age for gonadectomy of dogs and cats

The relationship of urinary incontinence to early spaying in bitches

What Is The Best Age To Breed A Newfoundland? The 13 Latest Answer - Ecurrencythailand.com

Have you researched ovarian sparing spay? May consider it for my girl.

We believe in waiting to be neutered or spayed, but when is the biggest question. I will probably be spayed when I'm three. The whole decision is just tough.The only thing we know for sure is to wait at least two years. Good post.