Pros and Cons Of Having A Pandemic Puppy 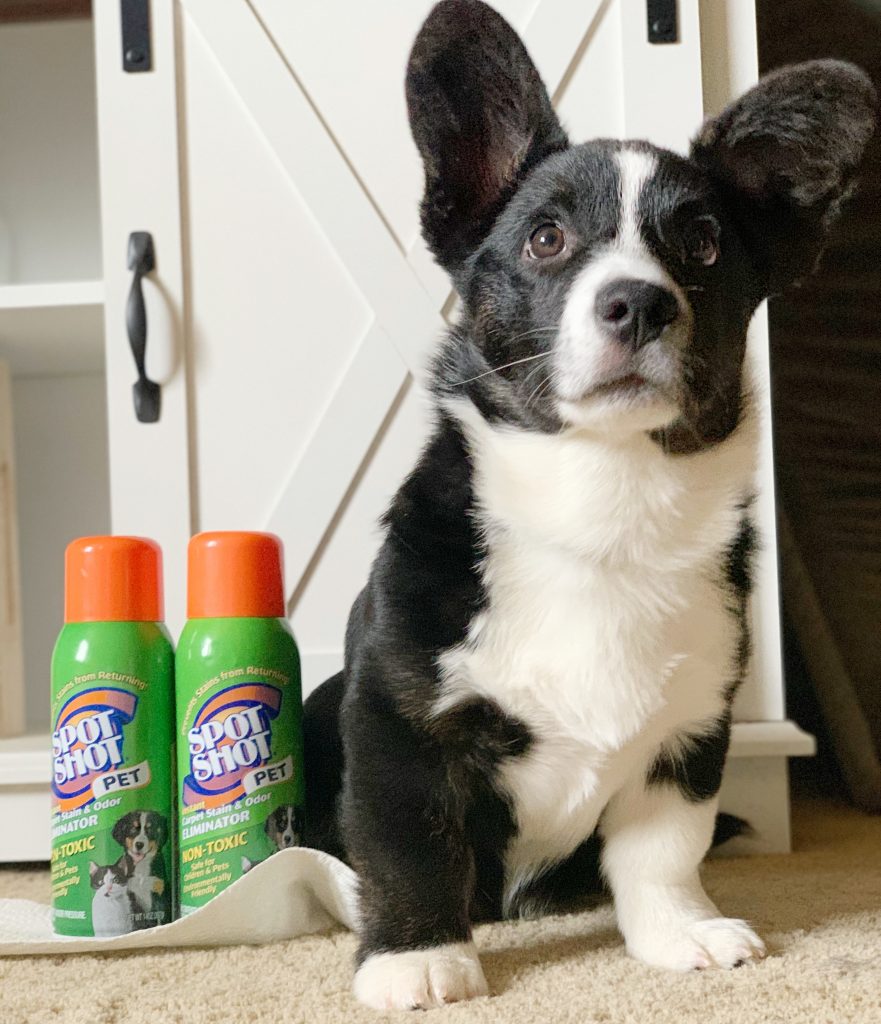 **This post is sponsored by Spot Shot® Pet Instant Carpet Stain & Odor Eliminator but My Brown Newfies only shares products and information that we think is of interest to our readers.

I didn’t set out to be apart of the pandemic puppy trend that has swept the nation over the last few months.

In fact, getting a puppy when all the chaos hit was the last thing on my mind.

I did wonder briefly how all this would affect me getting a Newfoundland puppy possibly later this year.

But I never thought about picking up a puppy during the middle of the pandemic.

It was a quick thought that popped in my head and I ran with it.

I’m not sorry that I did because Finn is awesome and I’m really loving getting to know the Cardigan Welsh Corgi breed.

He’s a great fit for our family and he has definitely brought some sunshine to our gloomy and anxiety-ridden days. 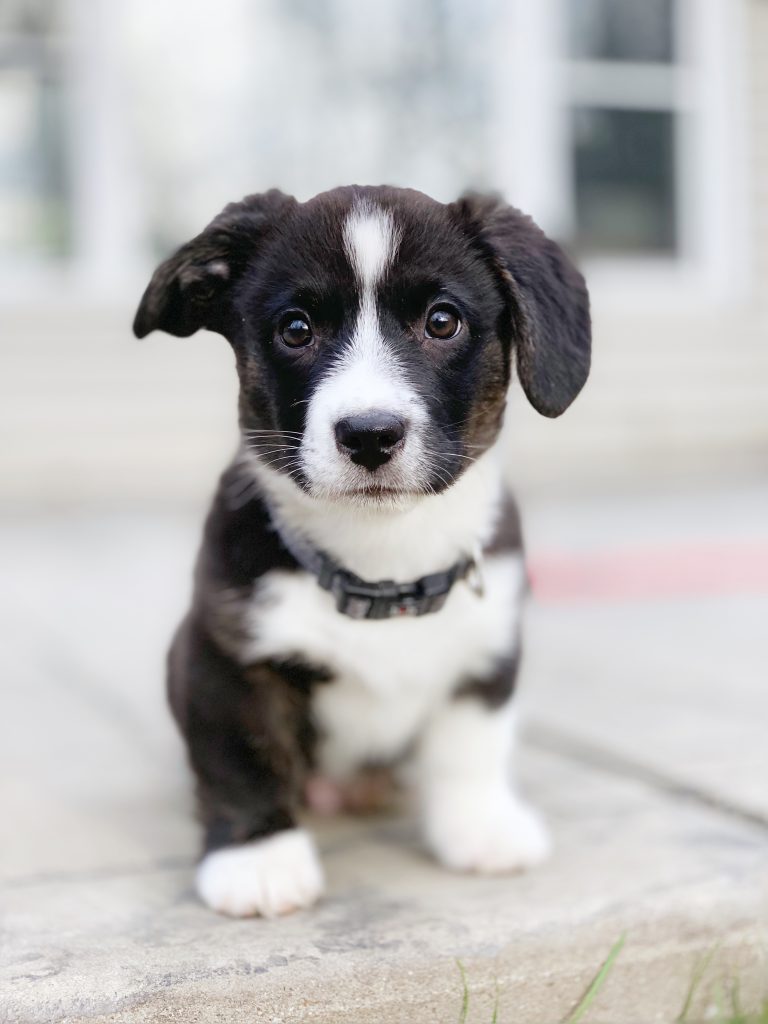 He’s also been a lot of work during a very stressful time.

I mean, I had it made with just Odin.

Odin lets me sleep in, doesn’t pee and poop in the house, doesn’t bite, and naps while I work.

He’s as low maintenance as a Newf can be.

Why would I want to change to that?

Having Finn during this time has been the best of both worlds.

So in case you’re wondering, here are some of the pro and cons that come with having a pandemic puppy:

Pros of having a Pandemic Puppy

One of the many reasons that we got Finn was because everyone was home so everyone could help. 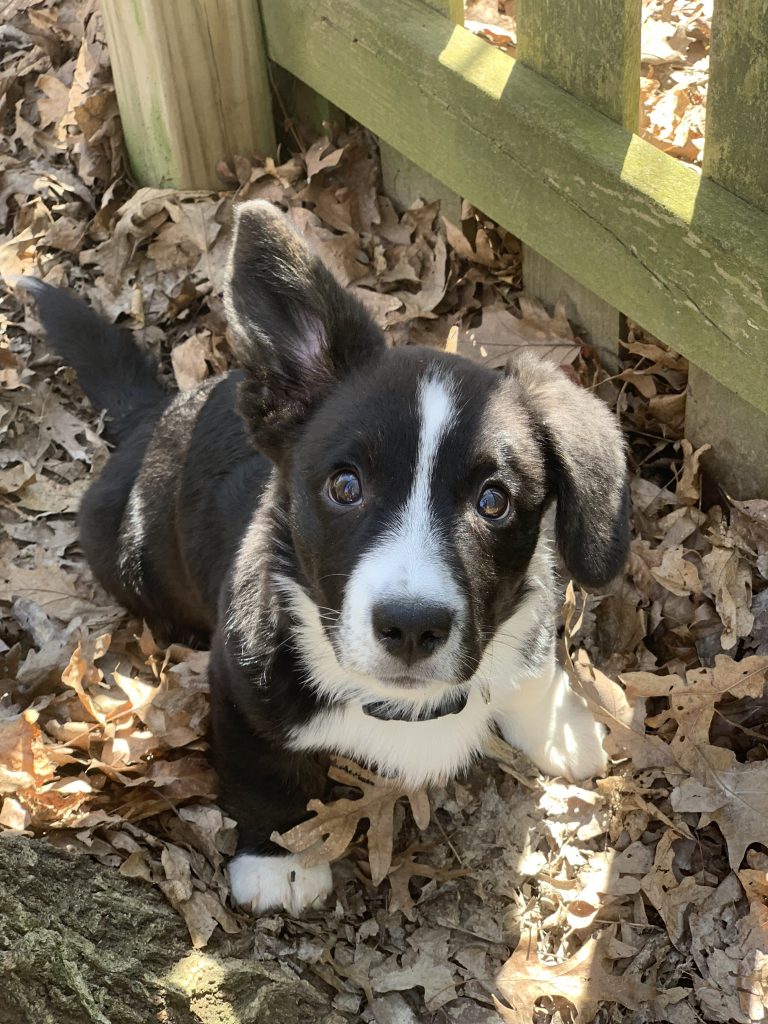 The kids are 15 and 18 so they are fully capable of helping to raise and train a puppy. (right?)

In a time of such uncertainly, Finn brought some much-needed smiles and laughter to our stressed-out world.

My kids were having a tough time adjusting and dealing with everything that was happening and they needed this to take their mind off of some of their stressors.

Finn is doing wonderful at that.

We came together more like a family with Finn. It’s not that we had drifted apart but all of us felt a little lost with what was going on in the world around us.

There was so much uncertainly and change in a short time and Finn found a way to bring us together with a common denominator. He gave us something to talk about other than Corona.

Spot Shot has always been my go-to pet odor and carpet stain eliminator and I was so thankful that I had a few cans on hand to deal with Finn’s accidents.

It was one less thing that I had to worry about. 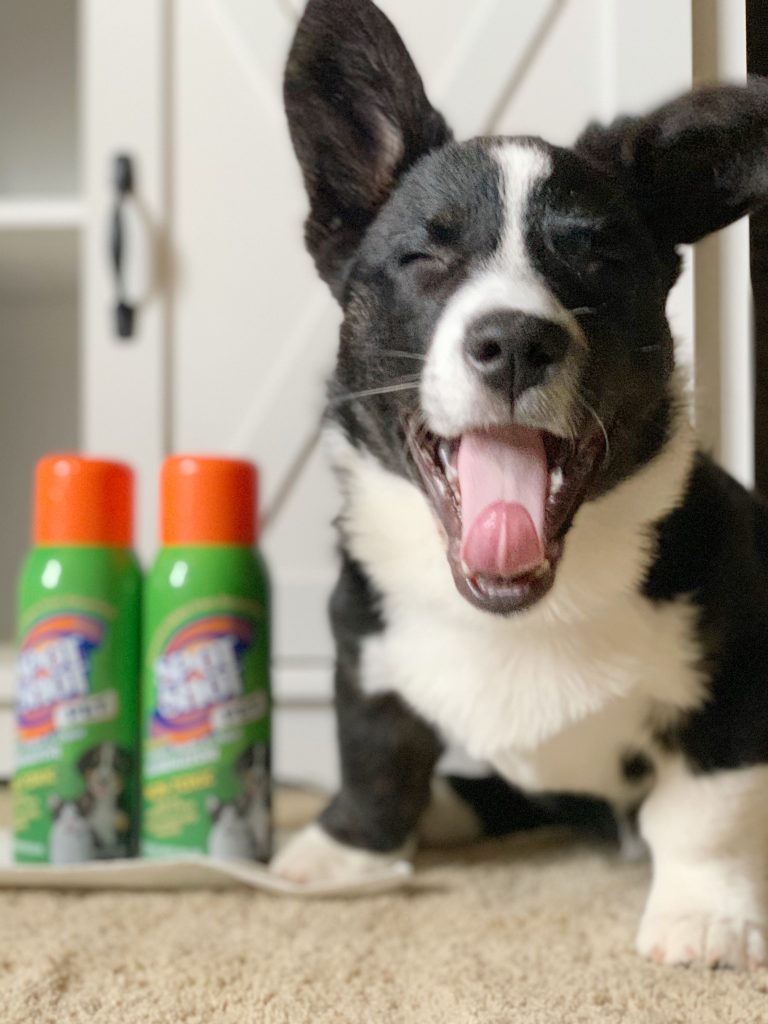 I knew that Spot Shot® Pet Instant Carpet Stain & Odor Eliminator would quickly and easily handle his MANY accidents with little effort on my part and the kids learned how awesome it was too and why we also have it in the house!

Cons of having a Pandemic Puppy

In a world where hand sanitizer is now a necessity when you venture out to the store, there has been a lot of pain involved when applying sanitizer to cuts from Finn’s razor-sharp puppy teeth.

For a while there it was pretty hard to get your hands on toilet paper and paper towels.

This is a concern when you’re potty training a puppy that doesn’t want to pee on the pee pads that you bought. 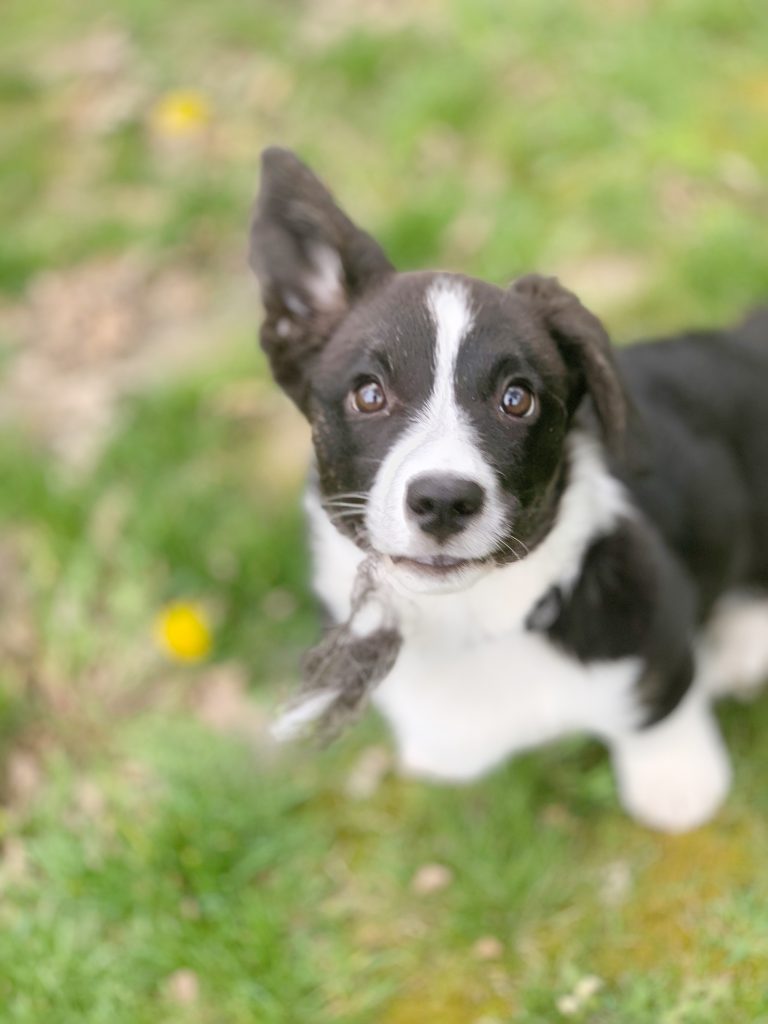 We made it through, barely.

Since most veterinarians are doing drop-off appointments, we were not able to go inside for Finn’s first vet appointment.

I hated sending him in alone but our vet called us while doing his exam and talked with us through the whole thing.

There was a shortage in some foods across the country so I was nervous that after we got Finn set on his puppy food, we wouldn’t be able to get it. That didn’t happen but it was a concern.

Along the same lines, dog toys were also difficult because I wasn’t able to go to the store and look at toys.

I had a good schedule going with sleep that was much needed but Finn is apparently a morning person. 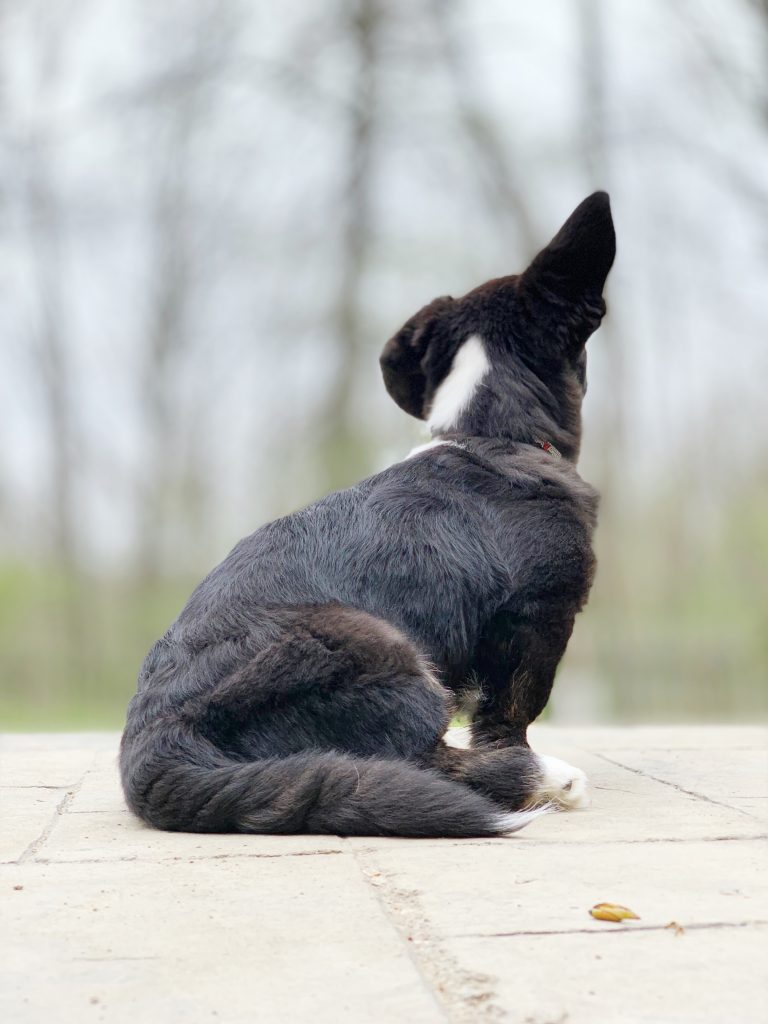 So I’m still getting up as if the kids were going to school.

My anxiety was already above peak level with the pandemic and adding a puppy in just piled it up higher.

The upside was that it seemed like the laughter and smiles helped to offset the anxiety.

My husband was working out of town for the first month that we had Finn and while the kids said that they would help, that quickly took a nosedive as I knew it would.

We had to have a few “family meetings” to restore order to that deal.

Finn has brought many smiles to our faces and had made for some wonderful memories during this difficult time.

Spot Shot products are available at Walmart, click here to find a location near you and don’t forget to grab your coupon!

You can also join the Stain Fighting Community on Facebook. 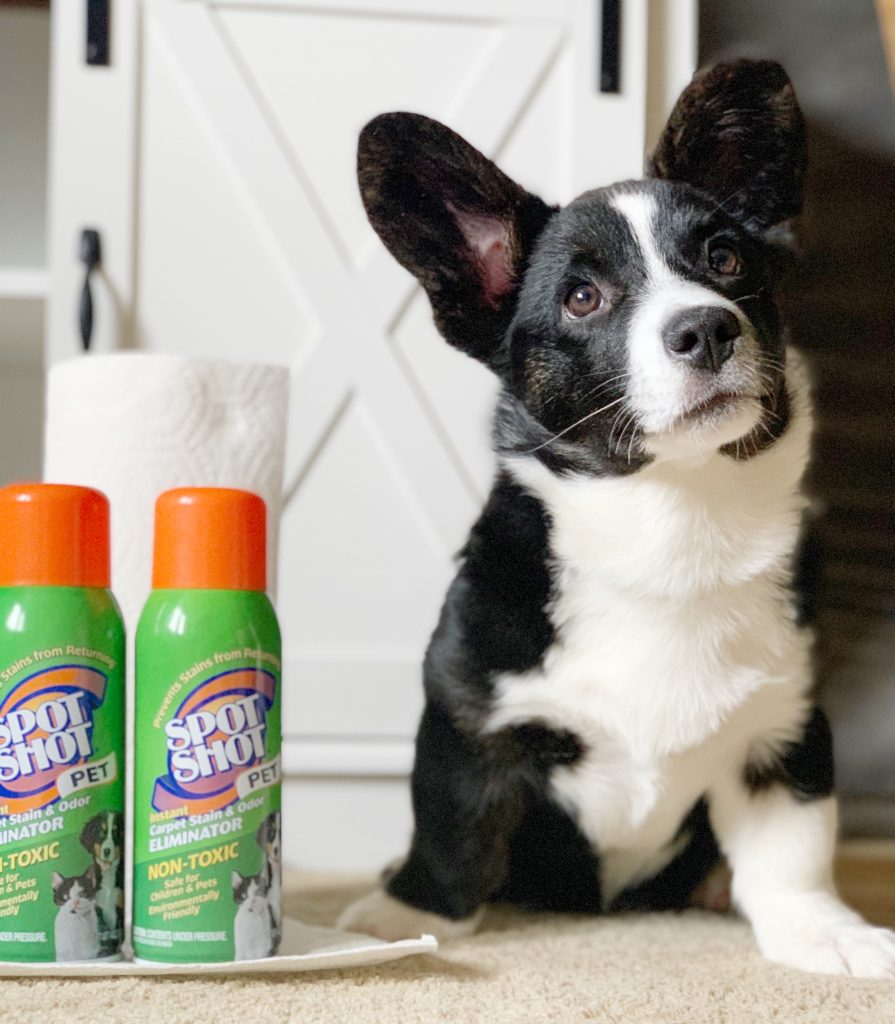 Finn is adorable!! Love him and glad he is now part of your family!! No pandemic puppy here, just a 3 year old newfie that WILL NOT go out to potty in the rain! Sometimes I wonder if she really is a newfie! Lol she has had a LOT of serious allergy issues to deal with so I guess I spoil her a bit. Thanks for all you do! Lots of love to all of you! ❤️🐾❤️

So enjoying watching Finn's adventures! Watching him and Odin together makes my heart smile! I wish I had thought about Spot Shot when Evie (my Newf) was a puppy! She was the most challenging dog in terms of potty training that I've ever had! Hopefully Finn will learn quickly and follow Odin's lead to go potty outside! Thank you for sharing your handsome boys with all of us, and all of the great tips that you share too!!

I didn't realize he was a Corgi. (I could tell he wasn't a Newfie pup but was wondering). You brought up some great points - having a puppy is a LOT Of work and doing it with support is critical. So glad Flynn helped your family during this time (and thanks for the heads up on the product - our breeder released rescue someones "piddles" when she gets really excited. She had so many puppies I think that's something we will always deal with so I will be trying that out.

Finn is an adorable puppy with such an expressive face. Thanks for sharing your thoughts.