If you asked most Newfie owners if their dog eats snow, you would probably get a unanimous response of yes.

Snow is one of the main 5 food groups for Newfoundlands.

In most cases, eating freshly fallen snow off of the ground is safe for the majority of dogs in small amounts, however, not all snow is created equal so some caution and common sense should be used. 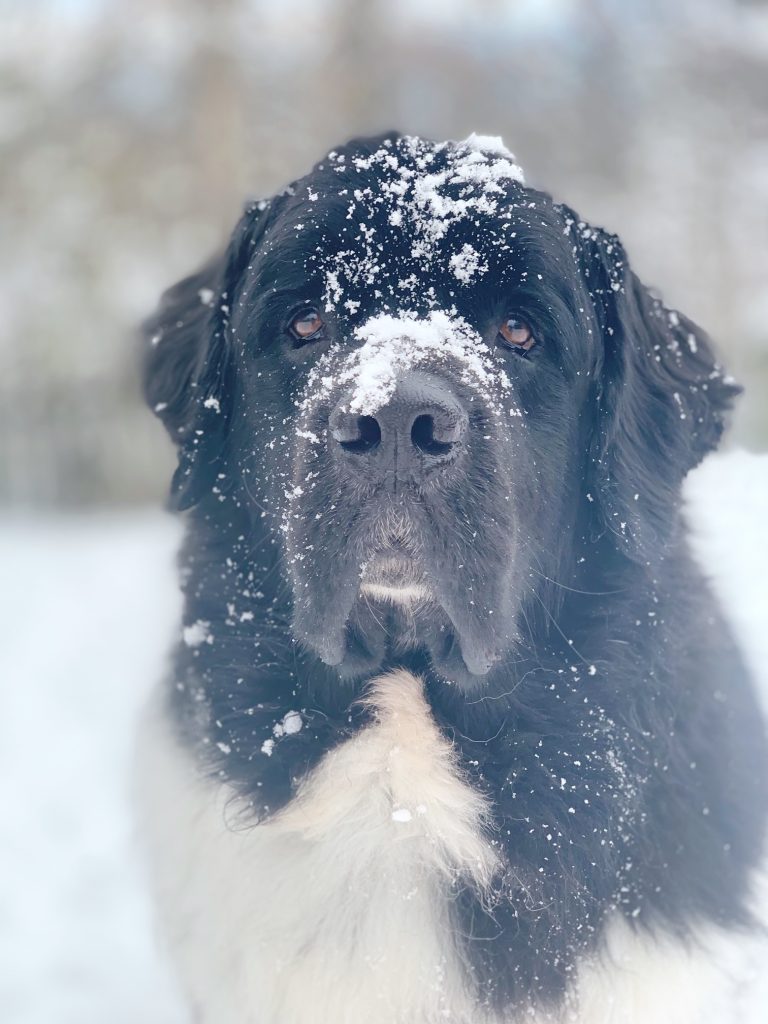 Why Do Dogs Eat Snow?

Many dogs will eat snow during the winter months as a form of play and just because they like it.

Some dogs will eat snow because they are thirsty.

Newfoundlands love the cold weather will eat snow because they need to cherish it before spring comes.

And finally, some dogs like eating fresh snow because it makes them feel better.

That depends on your snow because not all snow is equal.

The snow in my backyard is safe for my healthy dogs to eat in moderation.

Keep in mind that I also have big dogs with thick coats that love the cold temperatures.

I know what’s in my yard and what’s under the snow and my backyard is not treated with any chemicals and my dogs currently do not have any health problems.

Your yard might contain different things and you might have a small dog that doesn’t tolerate cold well. 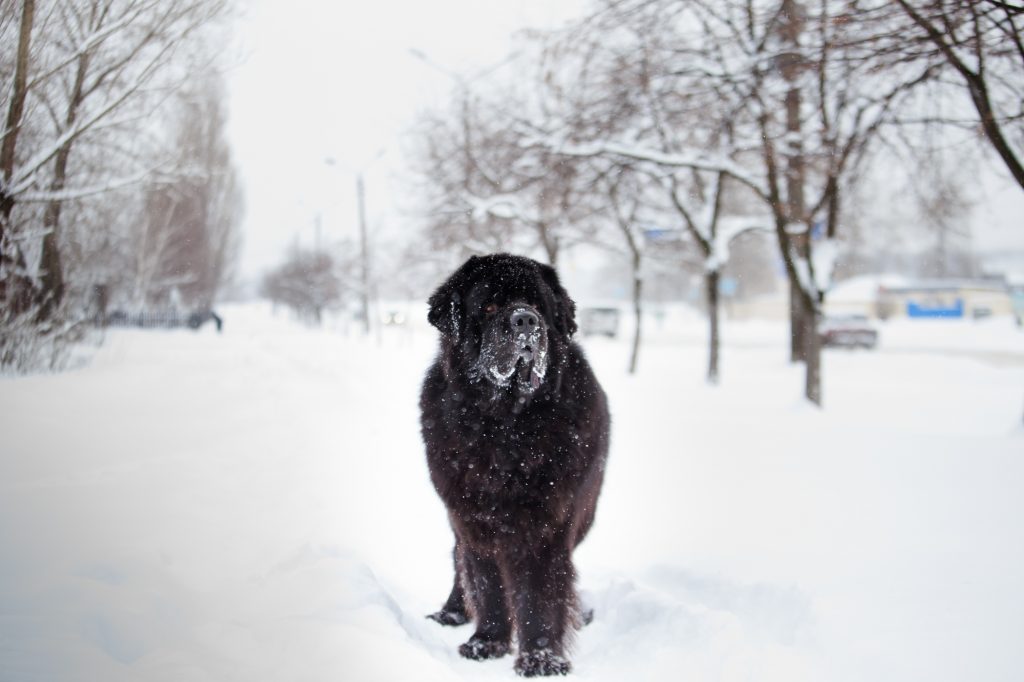 What Snow Is Not Safe For Dogs To Eat?

Snow that has been treated with harmful chemicals such as rock salt or ice melt is not safe for dogs to eat.

Sodium chloride is salt and too much salt can cause vomiting and diarrhea in dogs.

According to the Pet Poison Hotline, if large amounts are ingested, the dog can develop sodium toxicosis which can turn lethal if a dose of 4 grams per kilogram is ingested.

Potassium chloride salts may cause severe stomach upsets in dogs.

Ice melts that contain magnesium chloride can cause an upset stomach, and may also cause the build-up of high levels of magnesium in the blood in dogs with kidney disease.

Basically, don’t let your dog eat snow off of areas that have been treated with deicers or drink from snow puddles.

These areas are often public areas such as sidewalks, roads, driveways and playgrounds.

Snow that contains rocks, sticks and other yard debris may cause a dog to choke.

(*If you have a bird feeder in your yard or your neighbor has one, check to make sure that they aren’t dropping a lot of seed or other food in your yard.) 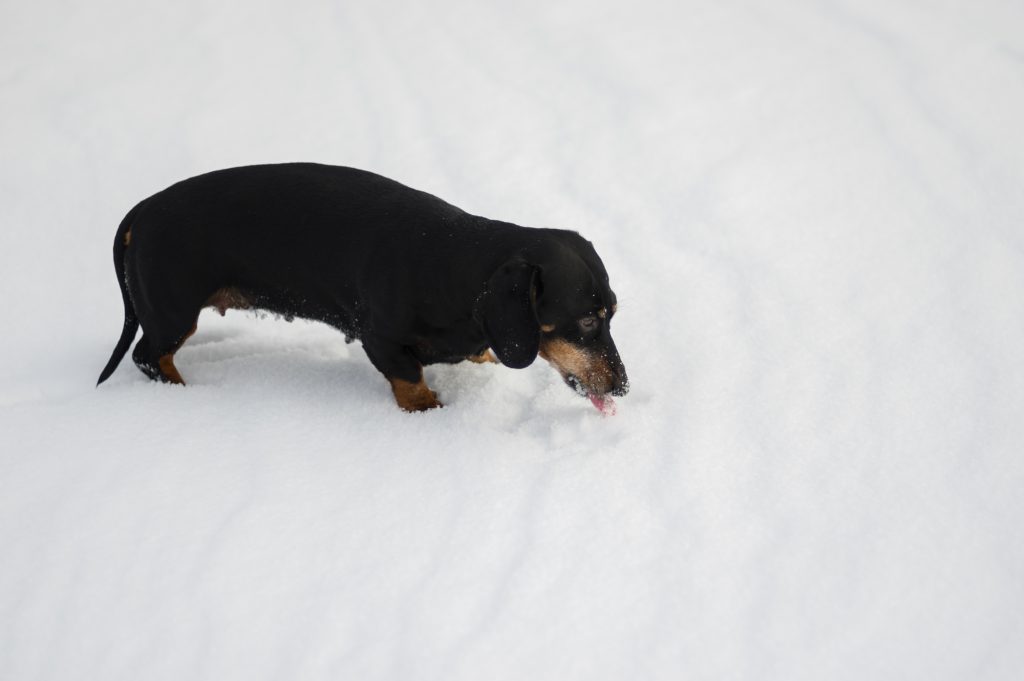 Will It  Make Dogs Sick?

Snow that falls during the winter months might cause some dogs to vomit if they eat too much of it.

A lot of dogs may eat snow for the same reason that some dogs eat grass.

Dogs that have a sensitive stomach or have medical problems such as liver disease, kidney disease and even IBD  may get sick from eating snow.

It’s always best to speak with your veterinarian in regards to your dog’s health and if eating snow is safe for them.

Leroy, my dog that had IBD, was an obsessive snow and ice eater.

Eating large amounts of snow and ice would trigger his IBD.

No, snow is frozen water vapor and only contains about 10 percent water so your dog would have to eat a lot of snow in order to stay hydrated.

All dogs should always have a fresh bowl of water (not ice water) at all times. 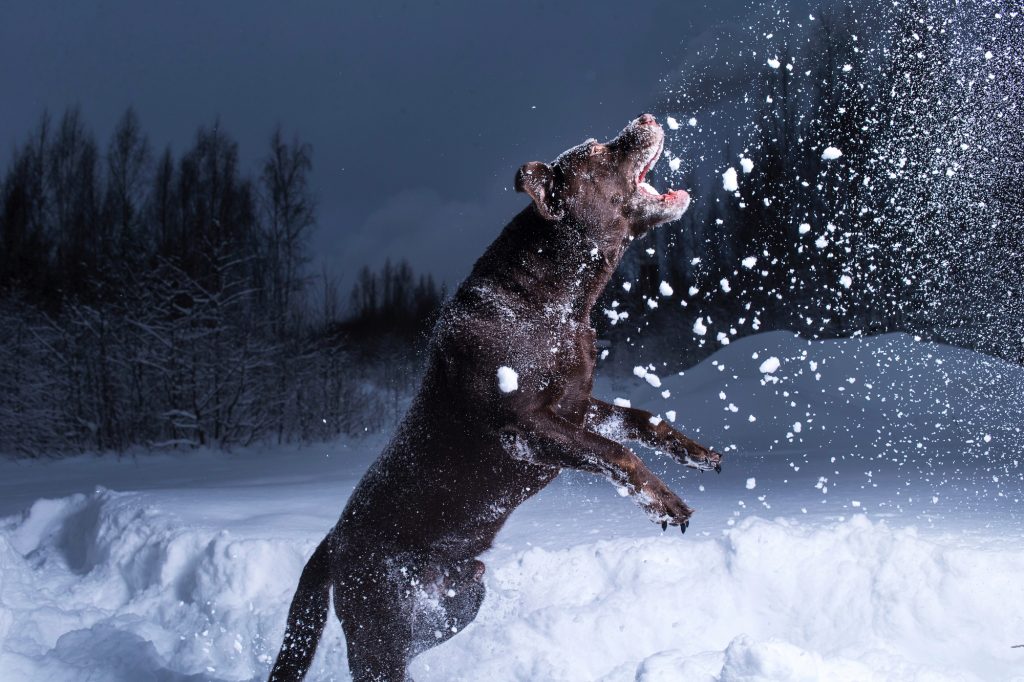 Are Snowballs Safe For Dogs To Eat?

What dog doesn’t like playing a game of fetch with a snowball?

The same principles will apply to snowballs as regular snow.

As long as it’s clean, it should be o.k. for most dogs to catch a snowball in their mouth.

Just know that dogs that know how to catch might get a mouthful of snow which can cause them to gag a little bit.

You should also keep them away from eating from snowdrifts which can be dangerous.

If a dog has snowballs on their paws that have formed, it’s best to try and carefully remove them or protect their paws with boots or paw balm, especially if they have been on a walk on treated surfaces.

During the winter season, it’s a good idea to make sure that your dog’s paws and paw pads are kept dry so that they don’t crack or get infected. 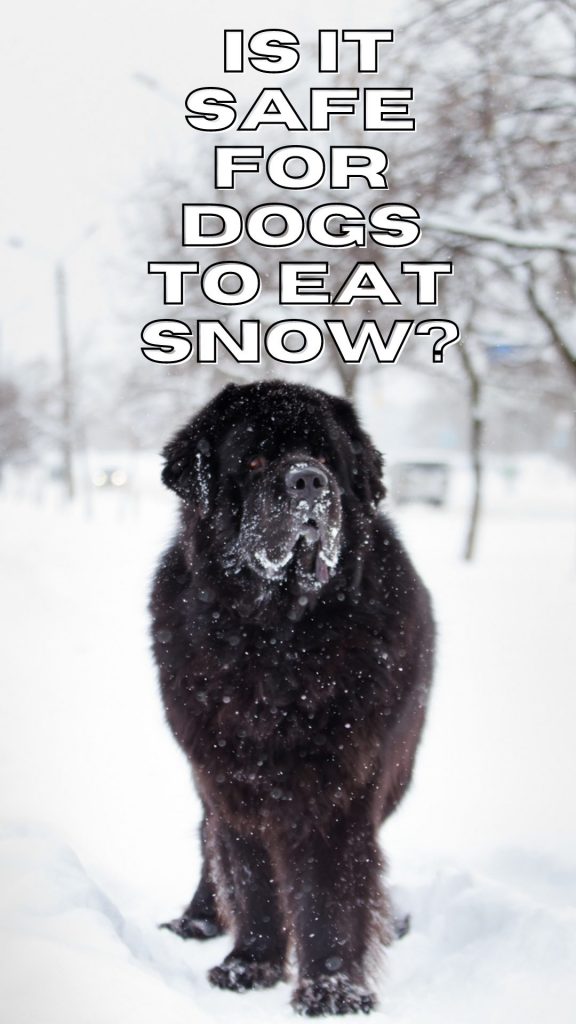 How To Keep Your Dog From Eating Snow

If eating small quantities of snow causes your dog to get sick or you just don’t want them eating it, the best way to stop it is to monitor your dog while they are outside.

You can also keep them on a leash so that they are always in reach.

And you can try to provide them with toys outside so that they are distracted or play some new indoor games when winter weather gets bad.

Dog owners should always provide your dog with fresh water in their dog bowls and monitor their water intake.

Eating snow for dogs is normally a fun activity but for some, it can be a sign of a medical condition.

You should always check with your veterinarian if you suspect that your dog may have underlying health problems..