While some dogs drool when they’re nervous, excited, hot, hungry or not feeling well, there are a handful of dog breeds that take drooling to a different level.

These drooly dog breeds have one particular feature in common that makes them the kings or queens of producing long strings of slobber.

This feature is their jowls.

These jowls are large, droopy and the perfect pockets for saliva to puddle in.

This puddle of drool eventually ends up hanging from the jowls and landing on the floor or a nearby wall or ceiling.

For some people the sight of this makes them gag but others don’t mind it being on their furniture, clothes or hanging around on their car seats.

True story, my husband was not a fan of dog slobber when we first met.

In fact, he would gag whenever my Newfie showed off his drooling talents. 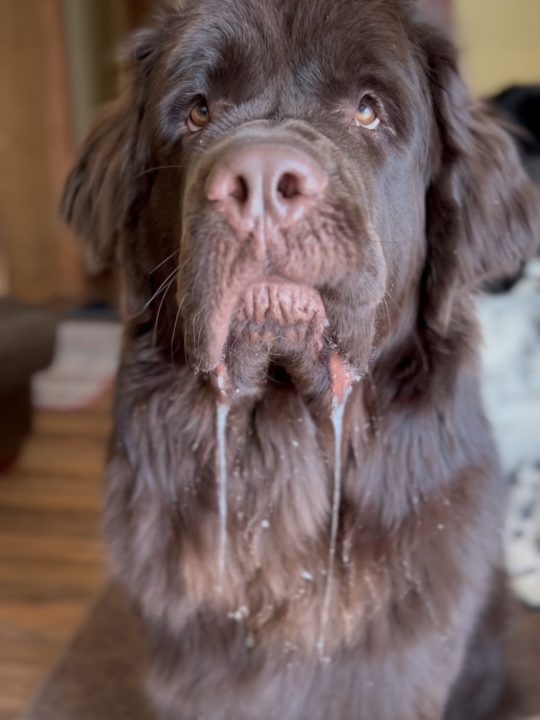 Thankfully over the last 25 years, he’s become more used to it, but he’s still not a fan of it touching him.

If you would prefer that your furry best friend didn’t drip drool, here are 12 dog breeds that drool the most (aka, the dog breeds you should steer clear of!)

This drooling dog breeds range in size XXL to small and are listed in no particular order:

Dog Breeds That Drool The Most

For that reason, it is not included in our list. 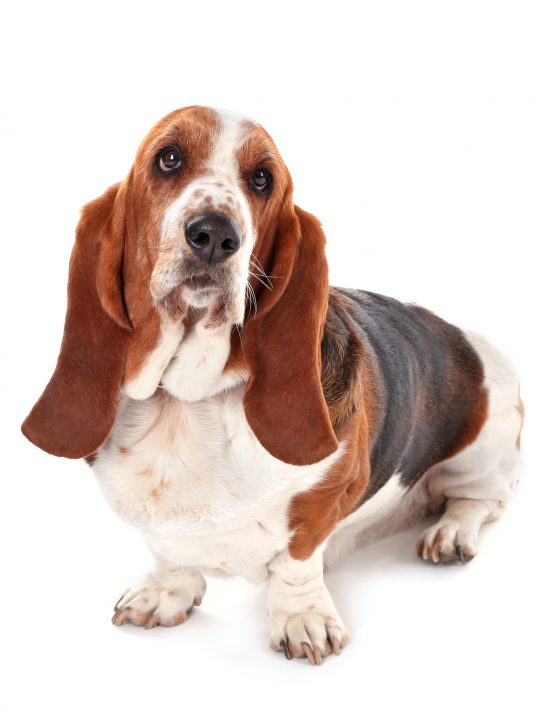 The Bassett Hound is a favorite among dog lovers and with good reason!

Their soulful eyes and soft expression make you fall instantly in love with them!

While only about 14 inches tall, don’t let their small size full you.

These hounds are most known for their strong scenting ability and for their ability to produce sparkling strings of drool that they smear over their family’s furniture.

The Bassett Hounds breed standard reads, “The lips are darkly pigmented and are pendulous, falling squarely in front and, toward the back, in loose hanging flews.” 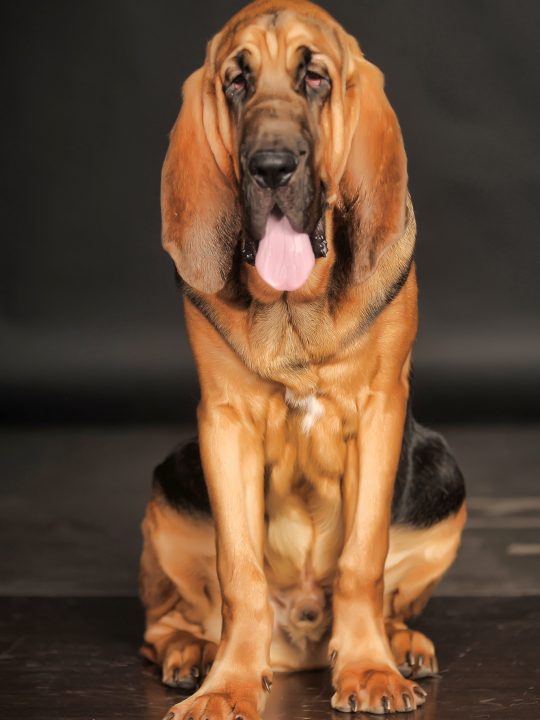 Also known as a “Sleuth Hound” the bloodhound is most known for its stellar scent skills.

They are a very powerful breed with a noble and dignified expression.

And you guessed it, they drool!

Breed standards read: “Lips, Flews, and Dewlap-In front the lips fall squarely, making a right angle with the upper line of the foreface; whilst behind they form deep, hanging flews, and, being continued into the pendant folds of loose skin about the neck, constitute the dewlap, which is very pronounced. These characteristics are found, though in a lesser degree, in the bitch.” 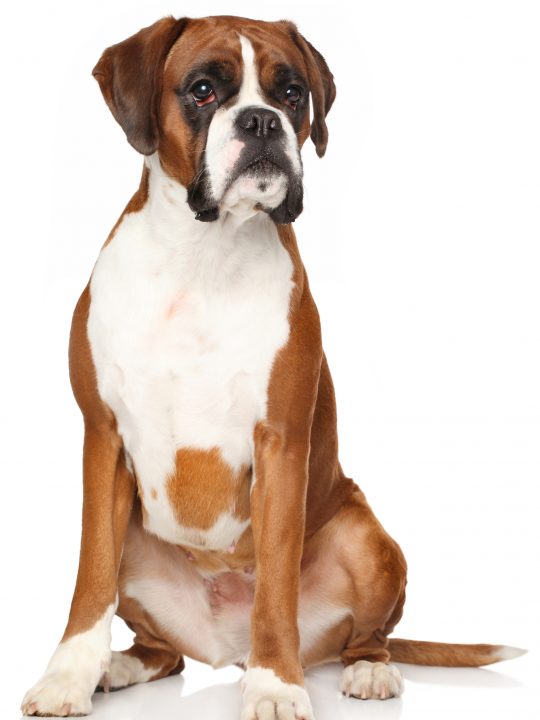 The Boxer is a great all-around dog breed that is loyal, affectionate, smart and good-looking.

They are silly, loveable and courageous but they also need a lot of training and guidance from their owners.

The Boxer breed standards read: “The upper jaw is broad where attached to the skull and maintains this breadth, except for a very slight tapering to the front. The lips, which complete the formation of the muzzle, should meet evenly in front. The upper lip is thick and padded, filling out the frontal space created by the projection of the lower jaw, and laterally is supported by the canines of the lower jaw.” 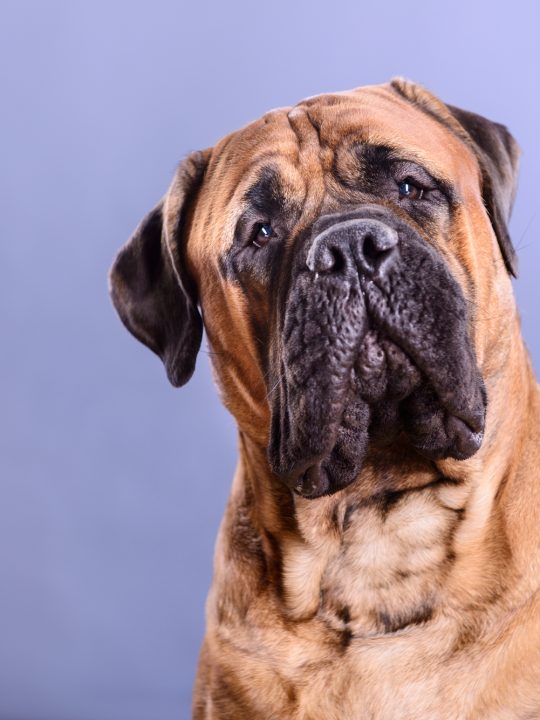 The Bullmastiff is a large breed dog that is powerful, fearless and confident.

They are also smart and loyal but not a breed for everyone.

The breed was developed in England by gamekeepers for protection against poachers.

A lot but not as much as some of the breeds on our list.

Their muzzle is broad and deep and according to their breed standards, their flews should not be too pendulous. 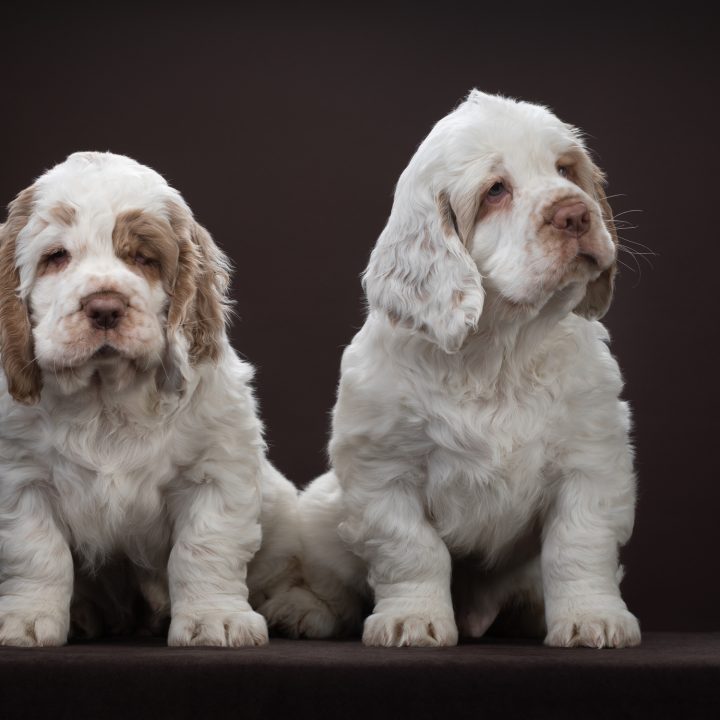 Don’t let their size trick you!

The Clumber Spaniel might be small but they are mighty and when it comes to drooling, they definitely hang with the big dogs.

The American Kennel Club says that “the Clumber Spaniel is the largest of the AKC flushing spaniels.”

Clumbers are friendly dogs that have no problem barking when they want your attention.

The Clumber Spaniel Club of America standards read, “The muzzle is broad and deep to facilitate retrieving many species of game. The nose is large, square and colored shades of brown, which include beige, rose, and cherry. The flews of the upper jaw are strongly developed and overlap the lower jaw to give a square look when viewed from the side.” 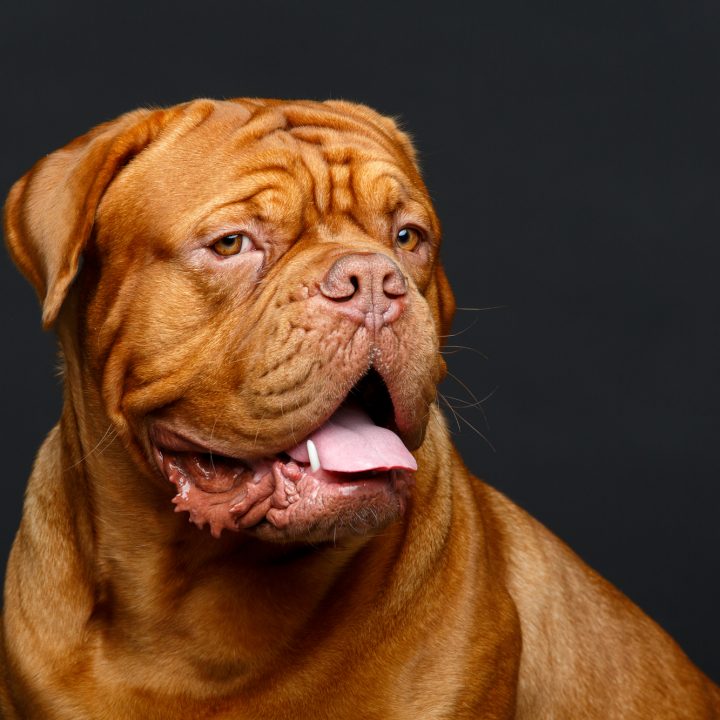 The Dogue de Bordeaux is an immensely powerful mastiff-type guardian and is one of the most ancient French breeds.

They are considered great guard dogs and have a protective nature but are also calm and balanced.

Breed standards read, “Upper lip – Thick, moderately pendulous yet retractile. When viewed in profile it shows a rounded lower line and covers the lower jaw on the
sides. When viewed from the front, the edge of the upper lip is in contact with the lower lip, and drops on either side thus forming an inverse, wide V. Jaws. The lower jaw curves upwards. The chin is very pronounced and should neither overlap the upper lip exaggeratedly nor be covered by it.” 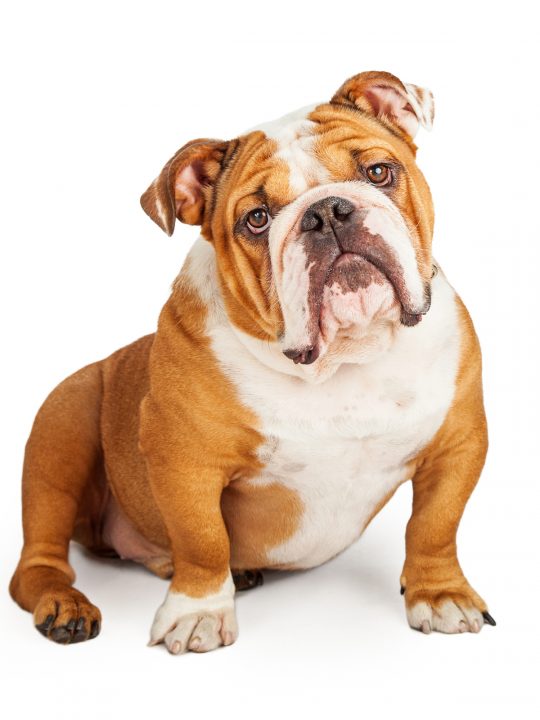 What’s not to love about the English Bulldog?

They’re small but mighty and ooze with personality.

The Bulldog is thick with a massive face and short muzzle that is hard not to recognize.

And you guessed it, they drool with the best of them!

According to the official standard of the Bulldog,  “The chops or “flews” should be thick, broad, pendant and very deep, completely overhanging the lower jaw at each side. They join the underlip in front and almost or quite cover the teeth, which should be scarcely noticeable when the mouth is closed.” 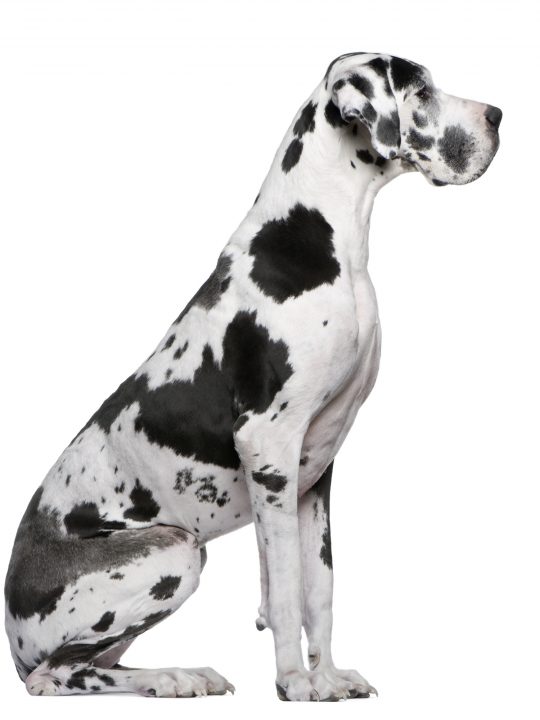 Majestic and tall the Great Dane can definitely produce enough dog slobber to create a slipping hazard on the floor.

They are giant working dogs and they must be spirited, courageous, always friendly, dependable and never timid or aggressive.

There is nothing in their breed standard that describes their jowls or flews worth noting except that fluttering lips are undesirable. 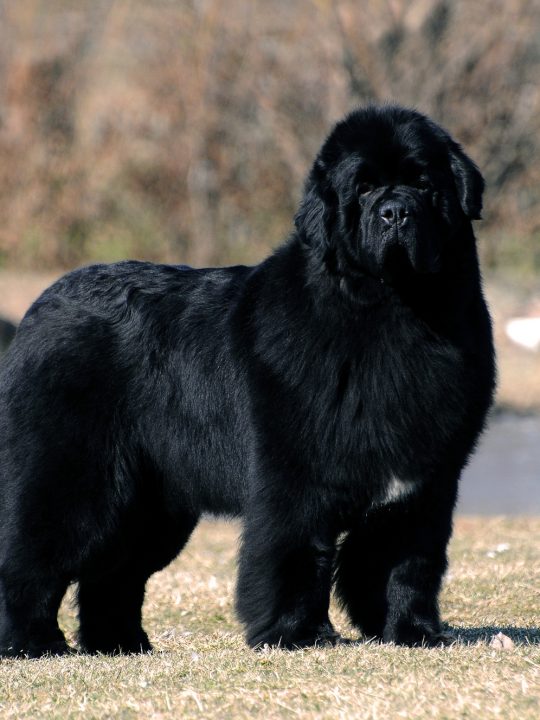 My slobbering breed of choice is up next, the Newfoundland.

While Newfoundlands are a wonderful family dog they are definitely not a breed for neat freaks.

Newfies not only shed but they drool too!

Don’t be fooled by scam terms such as dry-mouth Newfoundland-there is no such thing!

Newfies drool, some more than others.

Newfies have loose jowls so it’s easier for them to haul in boat lines or people in need of help in the water.

Their large jowls allow them to perform water rescue work without swallowing a lot of water in the process.

They are considered gentle giants when they are mature adults. 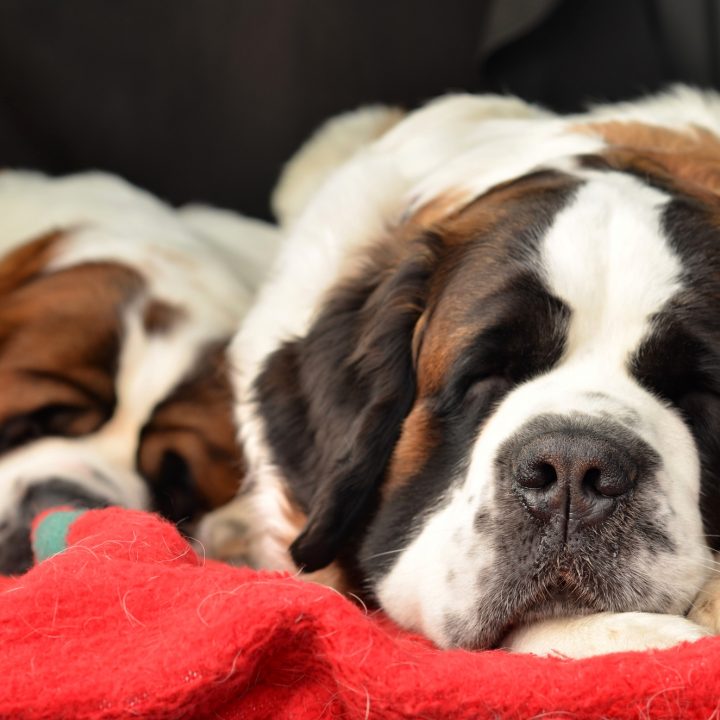 Last but certainly not least is the massive Saint Bernards.

They are a powerful breed with huge heads,  soft expressions and very loyal dogs.

St.Bernards can often be found wearing drool bibs to catch the drool before it hits the floor or ceiling.

Their breed standards read as follows, “The flews of the upper jaw are strongly developed, not sharply cut, but turning in a beautiful curve into the lower edge, and slightly overhanging. The flews of the lower jaw must not be deeply pendant.”

Of course, this isn’t a complete list of dog breeds that drool!

This is just a list of 10 of the dog breeds that drool the most.

How Do Dog Owners Manage The Drool?

If you’re wondering how dog owners of these drooly breeds manage, it’s a way of life that you just get used to.

However, there are a few hacks that we use to help deal with the dog slobber such as dog drool bibs, microfiber towels or drool rags in every room, Magic Erasers to remove the slobber off of the walls, baby wipes to remove dog drool off of car seats and covers on every piece of furniture.

We also know which fabrics show the least amount of dog drool stains!